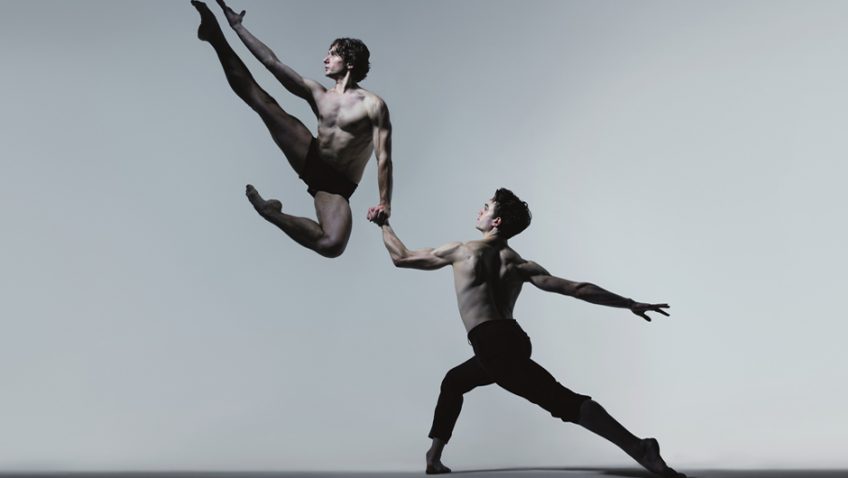 Men in Motion is a showcase for male dancers

Ivan Putrov’s Men in Motion is an exploration and celebration of the role of the male dancer from the post-Romantic era up to the present day. His latest showcase has 10 dancers, 6 choreographers and 14 short works.

An emotional Daniel Proietto walks on to the stage in front of the curtain whilst the house lights are still on and informs us that yesterday the audience behaved very badly. He was booed and jeered during his political statement and the management is not allowing him to do his monologue in full again. He is allowed only to recite the speech Charlie Chaplin made in the film, The Great Dictator, which he doesn’t do that well – not surprisingly in the circumstances. Once the speech is over, the curtain goes up and he does a few moves and takes a curtain call.

The curtain then comes down and a voice welcomes us to Men in Motion and asks us to turn off our mobiles. The orchestra immediately starts to play a piece from Tchaikovsky’s The Sleeping Beauty.

The audience waits for the curtain to go up and for the dancing to begin. There is no dancing and the curtain doesn’t go up until the Tchaikovsky is finished.

The dancing begins when Marian Walter performs Ludovic Ondiviela’s Berlin to music by Max Richter and the pleasure is watching a superb dancer dancing superbly.

Matthew Ball dances an extract from Christopher Bruce’s Swansong and Matthieu Ganio dances to Debussy’s Clare de Lune, his feathers moulting all the while.

Putrov looks over-rosy in Fokine’s Le Spectre de la Rose. Has this tender, fleeting, romantic ballet ever been able to recreate the impact Tamara Karsavina and Vaslav Nijinsky with his spectacular elevations made on audiences in 1911?

A spotlit Proietto spins and grovels in despair on a dark stage in Russell Maliphant’s After Life (Part One) to music by Eric Satie; but it is so dark difficult to know what is actually going on.

The second half opens with Eric Gauthier’s Ballet 101 in which Giovanni Princic goes through the 100 classical positions at top speed in a jokey revue sketch sort of way.

Petrushka’s solo (danced by Anton Lukovkin) and the Prince’s variation Act 1 solo from Swan Lake (danced nobly by Matthieu Ganio) do not have the same force out of their original setting and context. The costume is not enough.

In Ondiviela’s System/A.1 Ivan Putrov is sent a mail order birthday present of a robot stud (Matthew Ball) and once the packaging is off they do robotic things together. Even more appealing is what two fine-bodied lovers (Alessandrio Stalano and Marian Walter) get up to in Roland Petit’s pas de deux from Proust Ou Les Intermittences de Coeur.

Proietto, all in sliver, whirls about in the dark, flashing his spangles in Alan Lucien Oeyen’s Sinnerman.

Irek Mukhamedov is given pride of place, the last item on the bill, Jingling from the Zills choreographed specially for him by Arthur Pita. He plays a drunken tramp smashing tambourines. He could be auditioning for a role in Maxim Gorki’s The Lower Depths.

What the sketch needs is a music hall comedian such as the London Coliseum used to have in the early 20th century when it was a music hall and you could see great comics, jugglers, magicians, dancers, gymnasts, great opera singers, great ballerinas, Sarah Bernhardt and a scene from Shakespeare, all in the same bill.