Home / LIFESTYLE / REVIEWS > / FILM REVIEWS / A competitive swimmer battles alligators and a hurricane to save her father, but the film lacks bite 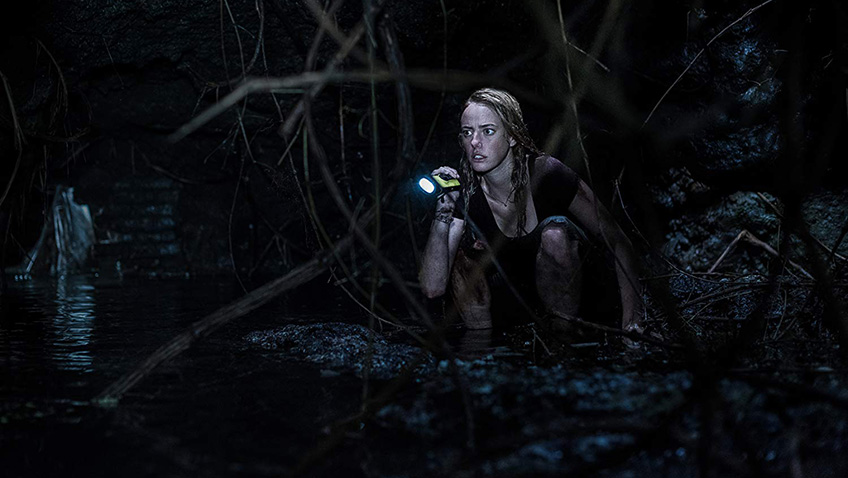 A competitive swimmer battles alligators and a hurricane to save her father, but the film lacks bite

End of summer, woman-in-jeopardy thrillers typically have four basic elements: an actress who looks great in a bathing costume; an encounter with an vengeful fish or amphibian; an aversion to precaution, balanced by impressive survival instincts; and a sentimental reconciliation with a family member or a lesson learnt. In the past few years we’ve had 47 Metres Down and The Shallows, both pitting young women who have problems at home against sharks (the fish kind) when they go on holiday.

, written by Michael and Shawn Rasmussen (John Carpenter’s 2010 horror film, The Ward), up the ante. They combine a disaster movie, in the form of a Florida hurricane, with a woman vs alligator battle. When you throw in references to an incestuous human relationship, this sounds like the perfect cure for the rainy August blues. Aja (Piranha 3D), and the appealing actress Kaya Scodelario (The Maze Runner franchise) provide all the entertainment, silliness and gore we expect, but the film lacks bite.

Swimming scholarship student Haley (Scodelario), is practising a relay race at the University of Florida, Gainesville. Her stroke is the crawl. Her timing if off, but something about Haley suggests a deeper source for her troubled demeanor.

Haley’s older sister, Beth, babe in arms, phones from Boston to ask about their father Dave (Barry Pepper) who is not answering his phone. He runs his own construction company in southern Florida where a grade 5 hurricane is in progress. Beth wants to know if Haley has heard from their dad. Through the conversation we learn that there is some tension between the sisters over dad, but even more between Haley and Dave who appear to be estranged.

Haley ignores Beth’s entreaties not to drive down there and she encounters a road block which, coincidentally, is manned by Wayne (Ross Anderson), a policeman at a who still holds a flame for Beth from school days. Wayne prohibits Haley from driving into the hurricane, but Haley deceives him and speeds away into the storm. 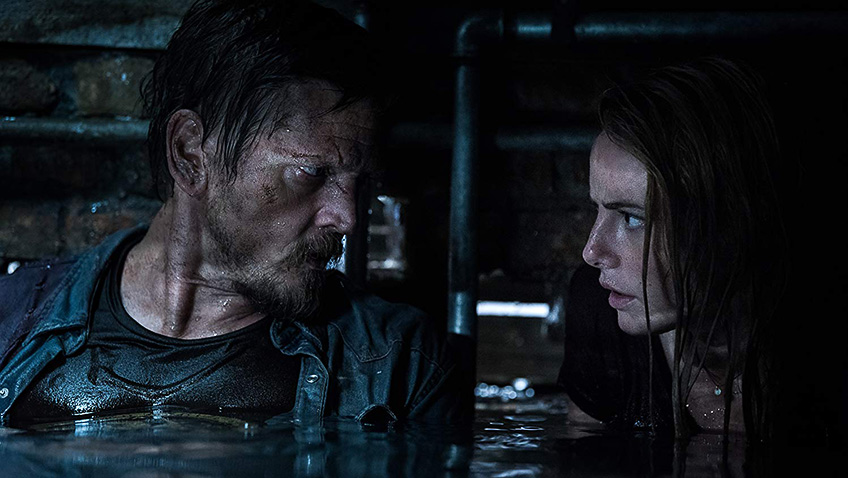 Entering the depressing apartment where her father has lived since his divorce, Haley finds their dog, Sugar, and proceeds to the family home which Dave was supposed to have sold. Thanks to Sugar, safe at the top of the basement stairs, Haley finds dad severely wounded and out cold in the basement with his tool kit nearby. The basement, which is oddly crisscrossed with low lying pipes, is filthy and in hospitable. As the rain and adjacent lake water pour in through open vents, it is to become increasingly more so when two huge, nasty alligators join them.

The clock is ticking as father and daughter must make it upstairs before (i) they get eaten by the alligators; and (ii) the basement fills with water and they drown.

To add a bit of variety to the drama, which is, for most of the film, confined to the family home, two useless policemen, one being Wayne, arrive in an inflatable boat. Look at your watch and you’ll realise the poor men have arrived too soon to save the reckless Haley and survive. In another such scene, Haley flashes her dying torch at three young people, who are busy looting a convenience shop, although in fairness, one does begin to walk, waist deep in foul water, towards the source of the light. There is a morality tale here when the greedy youngsters receive a harsh penalty.

In between Haley’s attempts to navigate around the alligators and find a way out of the basement, father and daughter do some serious talking. Haley feels responsible for the divorce. ‘It was because of me – you were always with me’ – she says, as dad was her swim coach. It gets steamier during the mouth to mouth resuscitation as their age difference is less than that between Melania and Donald Trump.

Still, there is a lesson in all this talk. Haley is reminded that when, as a little girl, she failed to swim the length of the pool underwater she secretly practised until she triumphed. And you are correct in predicting that this skill is going to come in handy.

Scodelario’s face is expressive without resorting to hysterics. You can see the adrenalin pumping to mask the pain and feel her competitive drive against the gators. Scodelario and Pepper have a family likeness and good chemistry. 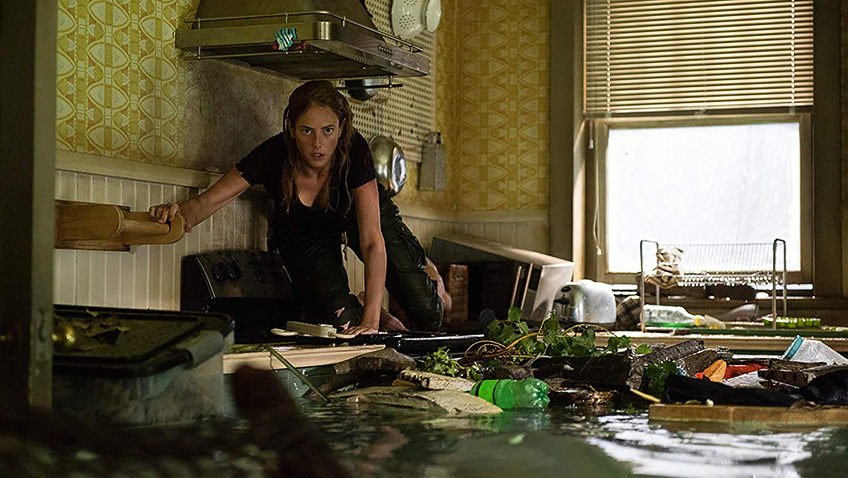 But this must be the only household in Florida not to have a gun, which would have come in handy long before Haley removes one from a dead body floating in the water. And the eye of the hurricane, which typically lasts a minimum of 30 minutes, here lasts about one. It is also strange that the home of a family of swimmers would be situated right on a lake that has a ‘danger no swimming’ sign. And why is the basement straight out of a horror film when most American basements have pool tables and washer-dryers? No wonder the home hasn’t sold.

could do for alligators what Jaws did for sharks if as many people see it and the scary creatures get a bum rap. Alligators are typically afraid of humans and will more likely than not swim away if approached. They will only attack if provoked or, (as is somehow the case here), protecting their young. They have slow metabolisms so the eating frenzy we witness is curious, too. And surely Dave should know that their jaw opening anatomy is so weak that a human can shut them with their bare hands, while a simple rope will keep them closed.

But what grates is that many audiences now realise that the alligators are the real victims as their habitats are turned into shopping malls and housing schemes. Alligators are considered one of the most important species in states like Florida for maintaining plant and animal diversity in their native wetlands. To omit all discussion of environmental issues in this type of film is a bit fishy.