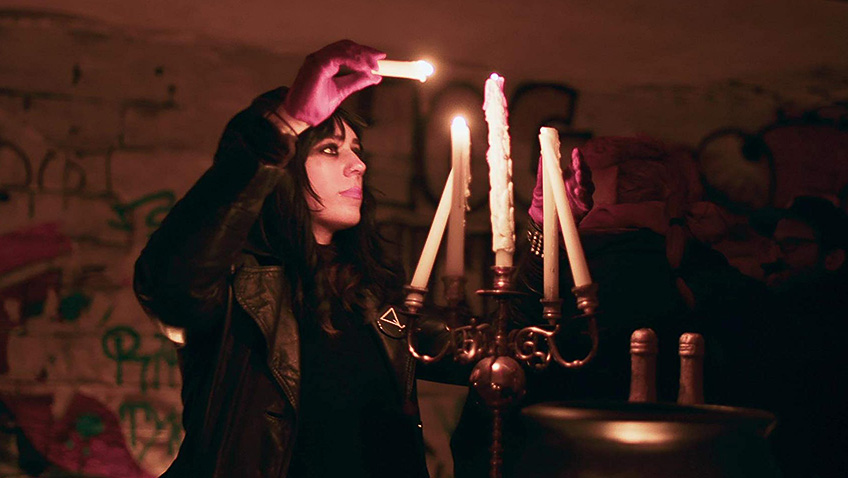 When you think of Satan in America, you might think of Charles Manson’s satanic cult; Jayne Mansfield’s friend Anton LaVey’s Church of Satan in 1960’s San Francisco; The Satanic Panic of the 1980s; and the Salem witch trials in 17th century Massachusetts, the subject of Arthur Miller’s chilling play, The Crucible. Producer Gabriel Sedgwick and director Penny Lane’s thought-provoking, but devilishly funny, Hail Satan? wants us to think again and think anew as The Satanic Temple will change your assumptions in 94 minutes. For the biggest revelation is that the Satanic Temple is not a religious order but a humanistic, benevolence society.

Do not read too much into the fact that The Satanic Temple, co-founded six years ago by the enterprising, principled and articulate Lucien Greaves (not his real name), has its headquarters in Salem, Massachusetts. This organisation employs symbols and conceptual performance to make their points, usually with humour and irony. The location of their HQ, and an 8-foot-tall goat’s headed statue of Baphomet – complete with two little children looking up in awe – being two such examples.

The mission of The Satanic Temple is not about sacrificing babies, corrupting minors or, like the Catholic missionaries, converting people to another religion. Their mission is to “encourage benevolence and empathy among all people, reject tyrannical authority, advocate practical common sense and justice, and be directed by the human conscience to undertake noble pursuits guided by the individual will.” In short it is about secularism and the American principle of separation of Church and State.

When asked why they don’t just call themselves atheists, the answer is that they do not want to define themselves by what they are not. And Satan was, after all, an angel who was rejected for refusing to blindly follow the authority of ‘God’.

A hoax takes place on the steps of the state building in Tallahassee, Florida in 2013 when the newly formed organisation takes on Governor Rick Scott over the issue of school prayer and wins. When attempting to notify the press to attend the event, Greaves has to spell out the name Satan letter by letter to a bemused reporter.

By the time the organisation confronts Arkansas politician Jason Rapert, a member of the National Association of Christian Lawmakers, the organisation has 18 national chapters and 50,000 members. Rapert is leading a drive to erect stone monuments of the ten commandants on the grounds of state capitals. When a dissonant local, not associated with the Temple, drives his car over the Arkansas ten commandments, the Satanic Temple, which condemns the act, although not the reason for it, is inaccurately blamed.

When the replacement is installed, Greaves is present in front of Baphomet. Denied permission to remain, the statue has been driven in for a short stay to make the point before being driven away again. Greaves is wearing a bullet proof vest and several of the members do not want to be identified in the film. The Temple and its members have received death threats, despite the Christian commandant, ‘thou shalt not kill.’

Greaves knows that you cannot shout over people who refuse to listen. But you can try moving your statue of Baphomet onto the Oklahoma State Capitol next to its statue of the ten commandments to make a point about religious pluralism. If the ten commandments tablet does not violate the separation of Church and State, neither should Baphomet. ‘We are giving Oklahoma a civics lesson’, Greaves says.

Just as the Temple is against the destruction of property, so it does not tolerate extremism or threats of violence, as former Detroit chapter head Jex Blackmore learns. While Jex, whose meetings are particularly kinky, accuses the Temple of turning into the very bureaucratic authority it is supposed to be rebelling against, she misses the point that encouraging people to kill President Trump is contrary to the mission statement.

Lane interviews members about their reasons for joining the Temple. One man grew up addicted to Dungeons and Dragons and graduated into heavy metal, both of which labelled him an outsider and an evil person. Another recalls seeing the film Gandhi in school and then being told that this saintly man would not go to heaven simply because he was not a Christian. Many members look like Goths, which suggests that a rebellious streak is their motive in joining. Others point to the hypocrisy of the Catholic Church covering up child abuse while protesting The Satanic Temple’s educational after school clubs.

In another diversion from covering the Temple’s stand-offs with politicians, we learn that claims that the USA is a Christian country are relatively recent. The founding fathers were not the people who inserted the phrase, one nation under God into the pledge of allegiance. Even the original pledge of 1892 did not contain the phrase, which was only officially recognised by Congress in 1942, just after the Japanese attack on Pearl Harbor.

It was the Cold War that prompted Dwight Eisenhower to pass the 1956 law the words ‘In God We Trust’ must appear on all U.S. currency. Also in 1956, the nation’s motto, e pluribus unum, (out of many, one) was changed to ‘In God We Trust.’ Lane has some fun with the fact that in 1956 Paramount Pictures released Cecil B. DeMille’s The Ten Commandants. In a clip we see a wrathful Charlton Heston smash his tablet into a statue of the golden calf – clearly the wrong kind of God.

The Temple’s other activities could not be less Satanic. They have adopted beaches and highways to clean up the rubbish and litter and they organise Satanic Sock Drives to provide dry socks for the homeless. A ‘Menstruation with Satan’ campaign provides sanitary products to impoverished women across the country.

As one of the 7 tenets is: One’s body is inviolable, subject to one’s own will alone, it is no surprise that the Temple members find themselves outside of the dwindling number of family planning clinics in the USA. While sign-carrying Christians intimidate potential clients outside, Temple members perform a bit of performance art to protest what they see is the fetishising of embryos. But the point goes over the heads of the locals who believe, in the words of one lady, commenting on Baphomet, “they just want to irritate us”.