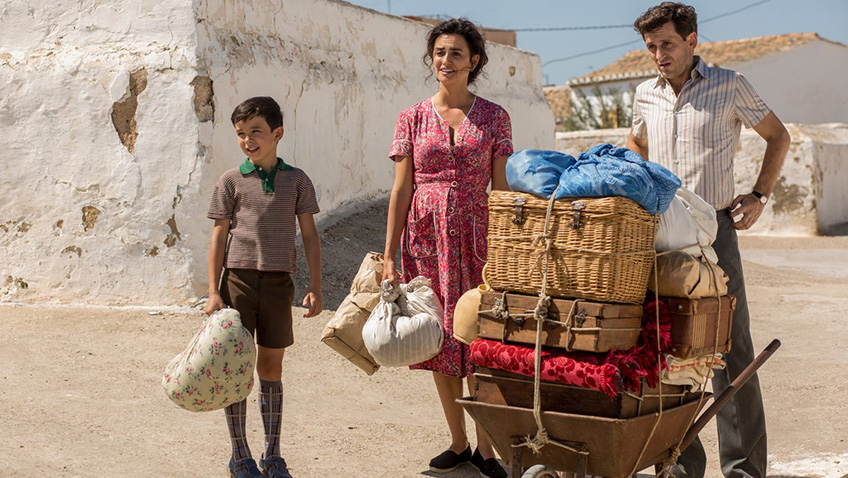 If the unseasonable August weather has failed us, 69-year-old writer – director Pedro Almodóvar has not. Nor has he waited until the official autumnal ‘awards season’ begins to spread a message about the joy and solace of creativity and cinema. But awards are surely in order for this profound, yet humorous reflection on growing old, and on the power of the arts to enhance and sustain life. 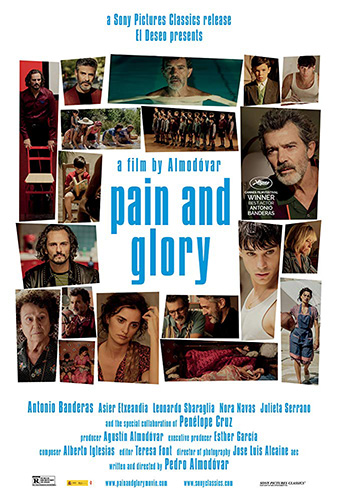 In Pain and Glory (Dolor y Gloria) frequent collaborator Antonio Banderas gives a career best performance playing a film director with striking similarities to his friend behind the camera. Banderas is so precise that he even resembles the director in everything from his spiky, grizzled hair and beard, to his mannerisms, and the way he dresses and walks, and to his expressive eye movements. The actor has had ample opportunity to observe the director, beginning in 1982 with Banderas’s first film (and their first collaboration) Labyrinth of Passion. Almodóvar is forthright that the film ‘deals with the important role that cinema plays in my life’ and the last scene of this gorgeous and immensely enjoyable masterpiece underscores this statement.

The opening shots focus on the pain of the title as the glory (at least until that last scene) seems to lie in the past. Salvador Mallo (Banderas), a single, self-absorbed film director of around 60, recounts his various physical (and mental) ailments with the help of detailed anatomical and medical diagrams, which, like the beautiful opening kaleidoscope designs, are the work of Juan Gatti.

Pain and Glory can be seen as the third in a trilogy (to date) about a film director that includes Law of Desire (also starring Banderas) in 1986 and Bad Education in 2004. There are elements of both of these films in Pain and Glory, but nothing is recycled, as here we are looking back at relationships through the eyes of a depressed and frustrated artist, frequently under the influence of prescription opiates (the topicality of which cannot be ignored) and of a new-found heroin addiction. ‘Filming is very physical work,’ Salvador explains, ‘and I’m not up to it.’ Once he begins writing, he will want to direct the script, and so he does neither. 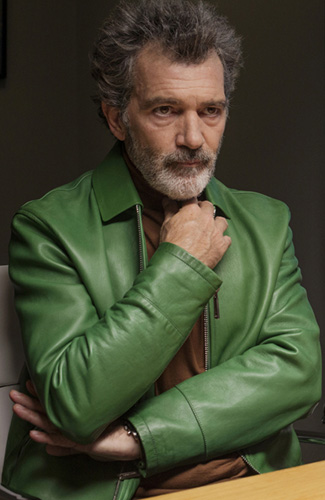 Antonio Banderas in Pain and Glory

The opening underwater pool shot and a scene in a choir at a seminary are intentionally reminiscent of Bad Education, but the tone here is different. And in one of several flashbacks to his childhood, while the cave-home in Paterna is fictitious, we are treated to the origin of Law of Desire which, in Pain and Glory, is the title of a film that has yet to be completed. Nor can fans forget that the last time Banderas and Almodóvar worked together was in 2011’s The Skin I Live In in which Banderas plays, not a patient, but an evil doctor. But doctors and diseases appear throughout Almodóvar’s films, and significantly in All About My Mother, which touches on Aids. That film starred Cecilia Roth who has a cameo here as Zulema, an underemployed actress who encourages Salvador to get out of his slump – and write another juicy role for her.

The reclusive filmmaker lives in a strikingly stylish apartment that is apparently a near-replica of Almodóvar’s and is filled with his magnificent art collection. In one scene, where Salvador’s long-suffering personal secretary, Mercedes (Nora Navas) goes through his mail, she reads a request from The Guggenheim for the loan of his Guillermo Pérez Villaltas paintings (one of which shows an artist reading an art book). ‘No!’ he shudders at the thought of separation, ‘they are my only company.’

The plot might be the most straightforward of Almodóvar’s films, but the script, which is one of the best of the year, if not the decade, is intricate, rich and ingenious in the way it plays with time and relationships, ‘autoficción’ and fiction.

Although Salvador looks back from the present day to a series of encounters from the 1980s, the 1980s scenes are not re-enacted. Yet they transmit the zeitgeist of the movida madrileña when, as Salvador writes in a touching memoir, ‘Madrid was ours’, but the death toll from all that hedonism and freedom was high. There are several different glimpses of Salvador’s 8-year-old self (a talented Asier Flores), each progressing toward the climactic discovery, some 50 years after it was made, of a portrait of young Salvador. The artist is Eduardo (César Vicente) a handsome Paterna builder who is responsible for Salvador’s first sexual awakening. In one of the most delightful scenes in a film packed with them, young Salvador’s mother (another frequent collaborator, Penélope Cruz, terrific here) arranges that her son will teach Eduardo literacy and maths in exchange for Eduardo’s help fixing up the family’s new cave dwelling. When Almodóvar was growing up, illiteracy was rife amongst the working classes and Almodóvar’s only means of further education was to get a scholarship to the seminary that he parodies here, as in Bad Education. 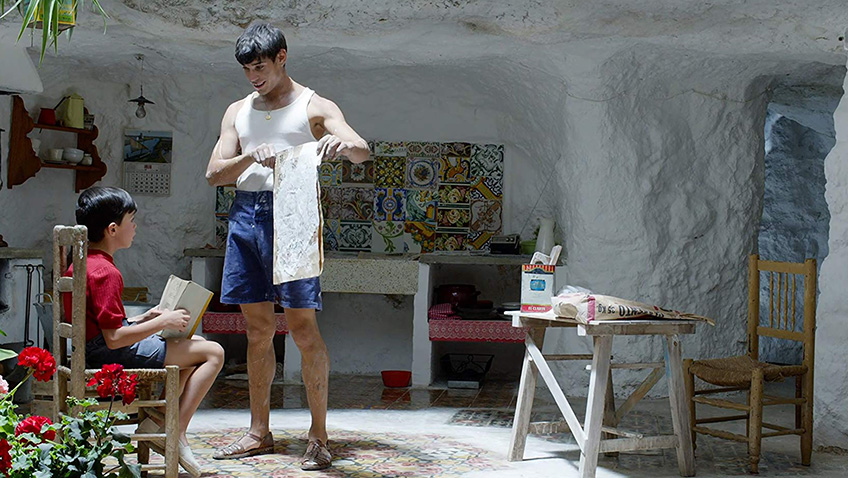 Asier Flores and César Vicente in Pain and Glory

In a moving scene, Banderas’s Salvador makes a promise he will not keep to his elderly mother, Jacinta, now played by Julieta Serrano (who really could be an older version of Cruz). This invites us to re-evaluate his selfless mother who sings and decorates their home with love and sews to help with her son’s education.

It is only later that we learn that Cruz’s Jacinta, who was concerned by an incident surrounding the creation of the portrait, did not send it on to her son – by then in the seminary. There is an ‘in-joke’ about Jacinta not wishing to be in Salvador’s films, as Almodóvar’s real mother did appear in three of his films and Serrano, coincidentally, has played Banderas’ mother in two previous Almodóvar films.

The trigger for Salvador’s (which means ‘saviour’ in Spanish) journey through his past is the cinematheque’s screening of a new print of his film, Sabor made thirty years previously and starring the charismatic actor Alberto Crespo (a superb Asier Etxeandia). The two fell out when Salvador insulted Alberto’s performance, and, when Salvador pays Alberto a visit to ask him to attend the cinematheque’s Q & A with him, Alberto is astonished. In a hilarious scene in which the two men end up too drugged to attend the Q & A but are audible on the phone line into the auditorium, Salvador re-opens the rift by saying that he objected to Alberto’s ‘heaviness.’ He had written the part of a funny cocaine addict, not a real-life heroin addict.

But it is when Salvador makes amends to Alberto that he is most rewarded. Salvador gives the out-of-work actor his personal memoir entitled Addiction that Alberto had wanted to turn into a one-man show. As a result of a performance of the monologue, Salvador is reunited with the love of his life and the subject of the memoir, Federico (Leonardo Sbaraglia). If Banderas had his first gay kiss in The Law of Desire, this might be his last, or at least his most passionate.