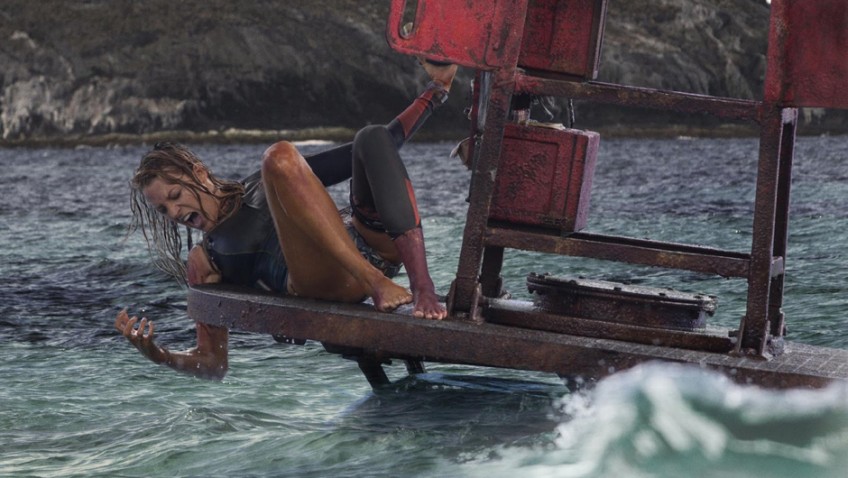 Blake Lively redeems the glitches in this taut survival thriller

We last saw the 28-year-old actress Blake Lively in Savages and The Age of Adaline and will soon be seeing her in Woody Allen’s Café Society, but we have never seen so much of her as in The Shallows

. For 98% of this sun-drenched survival film, set on a pristine, picture-perfect beach in Mexico she is wearing a bikini, sometimes partially covered with a wet-suit top. Her long, perfect legs play a large part in the film, and not only when they encounter a sharp coral reef, a vengeful white shark, and a couple of make-shift sutures. The talented Catalan director Jaume Collet-Serra’s absorbing, minimalist thriller is let down, however, by a script by Anthony Jaswinski that cheapens the visual and visceral impact.

The film begins with a boy kicking a ball along an otherwise deserted beach that borders a secluded cove. He encounters a camera attached to a helmet that has been washed up on the beach. We notice the remains of a half-buried surfboard near-by. He watches what looks like a person being dragged under water by a shark and runs home with his find. We do not know the relationship between the found camera and Nancy until the end of the film and have almost forgotten it by then.

The next person we see on this beach is Galveston, Texas resident and former medical student Nancy Adams (there is a reputable medical school in Galveston). She has come to Mexico with ‘an unreliable’ friend (left behind in the hotel with a hangover) to mourn and find herself. Specifically, she is looking for a beach where her late mother surfed just after discovering she was pregnant with Nancy in 1990. Much to the disappointment of her doting father (Brett Cullen) Nancy has just dropped out of medical school, disillusioned that she could do nothing to save her mother from the cancer that recently took her life. Nancy’s next challenge is to save herself. But first, this being a summer woman-in-jeopardy thriller, she has to break every safety rule in the book.

We watch Nancy offer money to the local stranger (Oscar Jaenada) who has given her a lift to the beach. When she asks the name of the beach, he does not answer, but he is a red herring and otherwise harmless.  Undaunted, Nancy wastes no time heading into the water she knows nothing about by herself, another reckless move. And we, if not Nancy, are only somewhat relieved to see that she is not alone, for the other surfers are not from the coast guard. When she asks the two male surfers in the water for the name of the beach they tell her, ‘if we tell you that, we die’, perhaps referring to the location they want to keep secret or to some old legend. In any event, Nancy cannot understand them as she speaks no Spanish.

After surfing a few perfect waves, Nancy takes a break to call her father and younger sister, which is where the expository back story is revealed. She eats an apple and drinks some water.

Instead of leaving with the two surfers, Nancy tells them she is staying behind for one last wave and another alarm bell rings. We never learn how she intends to get back to her hotel, but when you throw caution to the wind you don’t worry about such trivia . While waiting for the wave, she notices the carcass of a whale and soon discovers that she has inadvertently trespassed on a great white shark’s feeding ground. Within minutes Nancy finds herself stranded on a small rock with night setting in. A tense battle of wits ensues between Nancy and her ubiquitous, insatiable nemesis.

Blake Lively in The Shallows

At 86 minutes, The Shallows

is so compact that you are riveted from start to finish. And that says a lot, because some of the script is so silly you want to laugh.  Would you go surfing alone on a strange beach when no one knows where you are?  Wouldn’t Nancy try to make contact with her friend at the hotel? Why are there no more waves after the male surfers leave? And how could anyone from Galveston, where a quarter of the population is Mexican, particularly a med student, not speak a word of Spanish? And while we’re at it, how is it possible that Nancy could remain alive after opening her mouth to scream under water (and then swimming a bit more) before surfacing?

These questions and the sentimental back story manage to detract from a thriller that is nearly effective enough to make up them. Part of the credit is down to Collet-Serra’s direction, but most of it has to go to the photogenic Blake Lively, whose real life husband, Ryan Reynolds, spent most of the film Buried in a box underground – a survival thriller where a bit of fresh air and water would not have gone amiss.

While the film is set in Mexico, it was shot entirely on location in Australia. In fairness to Australia, this only happened when the city of Galveston refused the filmmakers a permit. Or, it could be that they didn’t relish the publicity: Galveston Beach is said to be the most dangerous beach in Texas. However, considering that Australia reportedly has the highest number of fatal shark attacks in the world, it seems a bit unfair to saddle Mexico with this nasty creature.  After all, Mexico and Australia are rivals for the surfing and scuba diving tourist dollar.