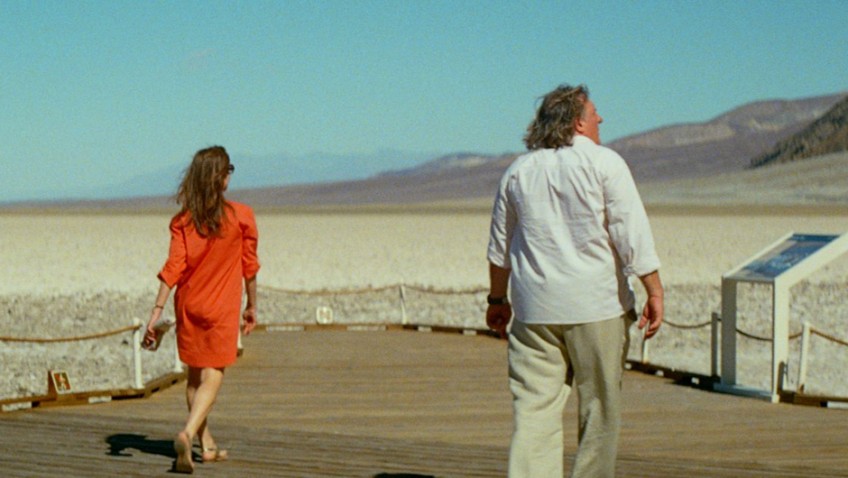 In reviewing Maurice Pialat’s 1980 two-hander, Loulou, The New York Times critic Janet Maslin wrote: ‘Loulou and Nelly don’t say much or think things over clearly, and the film does only a minimal amount of saying things for them. But Mr. Depardieu and Miss Huppert are magnetic enough to make up for this… The performances are much sharper than the film is as a whole.’ These comments also sum up Guillaume Nicloux’s Valley of Love, in which Depardieu and Huppert are reunited thirty-six years on as divorced parents trying to come to terms with the suicide of their only son, Michael.

The setting is not France, but Death Valley, California, allegedly, the lowest, driest and hottest place in North America.   With the help of cinematographer Christophe Offenstein’s widescreen lens and bleached out colours, the two actors transmit the sweltering drowsiness of the location that might cause anyone to hallucinate and become immersed in a surreal world. Isabelle arrives at the hotel first. It is some time before we realise why Isabelle (Huppert) and her ex-husband Gérard (Depardieu), both French film stars, are meeting at a hotel in Death Valley. Isabelle and Gérard have received a letter from their late, estranged son Michael, a photographer, ordering them to ‘be at Death Valley on 12 November 2014.’ The letter emphasises that both of them should come. ‘That’s the contract’. He will provide a ‘schedule with the exact times, dates and times’ when they are to wait for him. He explains that he killed himself when his boyfriend left him and that this ‘is my only chance at coming back.…’

If you disregard Isabelle’s surreal encounter with a decapitated animal’s head and Gérard ’s with an frighteningly contorted and abnormal young woman late one night, the film follows this waiting game in an almost documentary style as the two wander about different parts of Death Valley National Park. Despite Gérard warning Isabelle that he cannot remain the whole week, they keep to their end of the bargain. Michael, however, does not appear to be showing up as per his end of the contract.

The schedule provides them with plenty of time to talk, and we begin to suspect that the letter is a device to inject a bit of love and life in this valley of death: to reunite the former couple who would never have done so otherwise. Unfortunately for this theory, unless Isabelle is disturbed enough to have written the letter, it or it is a sick joke, the letter is real.

We learn that both actors remarried and have second families, but neither marriage was successful or has any reality for the audience. We also learn the real, legitimate, reason why Gérard cannot remain the full week. Still, Isabelle resents Gérard ’s early departure as it diminishes her chances of seeing Michael again. Gérard points out that Isabelle did not even attend Michael’s funeral. Isabelle, retorts defensively, ‘I haven’t been to a funeral since my father died.’ Too weary to continue the pointless accusations, Gérard says, ‘I don’t want to argue.’

There are only two other characters in the film and Nicloux uses them for a humorous interlude in which he pokes fun at celebrity. A American man approaches Gérard for an autograph for his wife. It’s clear that his wife is the film buff as he cannot recall any of Gérard ’s films. Gérard signs his name ‘Bob De Niro’, later regretting the impulsive rebuff when he and Isabelle are roped into having cocktails with the Americans by way of apology. Ultimately the Americans grow as disillusioned with the film stars as the stars grow bored with the Middle Americans.

For much of the film Depardieu, 68, about three times heavier than he was in Loulou, is attired only in shorts, carrying his massive bulk surprisingly well, at least at night. As they trudge through the desert in the hot sun, however, you think he is going to have a heart attack. Early on, Isabelle, perhaps automatically; perhaps remembering the handsome young man she fell in love with, tells Gérard that he is looking well. ‘How can you think for one second that I can be fine?’ he snaps, trying to draw her back to reality or to him in the here and now. ‘I got fat’, he blurts out. Dismissive of his self-absorption at such a time, she brushes him off with a, ‘Whatever makes you happy.’

Huppert, 63, and possibly even tinier than she appeared in Loulou, makes an almost comical partner with the big bear at her side. But the chemistry is still there as moments of resentment, bewilderment, tenderness, love and ultimately, something akin to forgiveness, emerge.

Both performances are so effortlessly expressive and natural that we do not need any tangible manifestations of Michael, particularly as Nicloux shoots the real and the mystical elements in the same manner. That a letter from a dead son propels these two parents to a strange rendezvous says less about their fragile states of mind than about the bungled supernatural strand that is at the core of the narrative.

At first Isabelle tells Gérard that she had consulted a tarot card. That a distraught mother would visit a tarot card reader sounds so much more plausible than the receipt of a letter from a dead person that it’s odd that Isabelle confesses she invented the card reader and not the letter. Huppert and Depardieu are perfectly capable of letting us read into the red marks on their ankles and wrists respectively without the indication (the cave scene) that they are real. How much more powerful it would have been for us to speculate that the marks are rashes from some plant while leaving some faint, unmentionable hope that they are the visible signs of love and hope reaching out to them.  Here, Nicloux’s own touch is too heavy-handed.