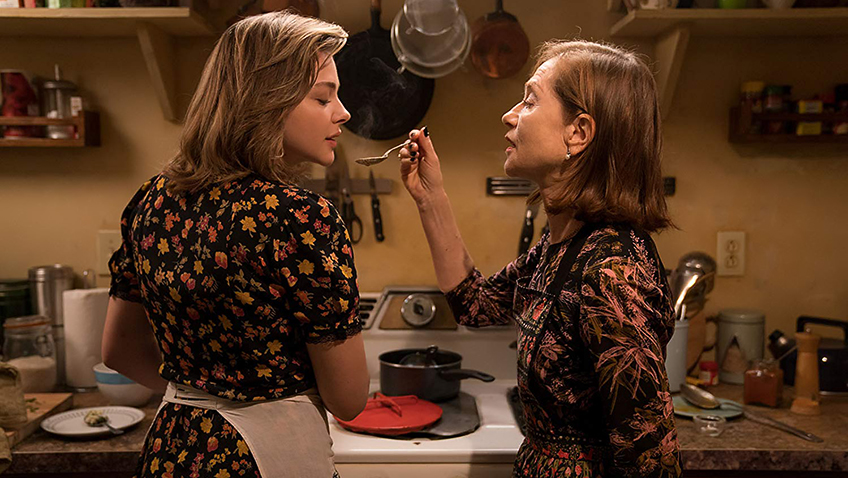 Any film starring Isabelle Huppert is worth seeing. Watching her eponymous character, Greta, a lonely Hungarian widow living in NYC and dreaming of Paris, dance barefoot across her living room floor where a man has just been shot or slap her piano student across the knuckles for missing a note, is worth the price of admission. The little jig is a weird and wonderful Huppertesque adlib, and the second is a nod to her sadomasochistic, eponymous piano teacher in Michael Haneke’s acclaimed film The Piano Teacher.

has noteworthy similarities, although the mother/daughter characters are not related, not British and live in Manhattan. And while both spend time sleeping in a trunk, only one is an unhinged predator.

At a crossroads in life, sweet, pretty and wide-eyed Frances (Chloë Grace Moretz) has come from Boston to the Big Apple not to try her hand at acting, but to work as a waitress and recover from her mother’s untimely death. Her hip, fun-loving and street-smart roommate Erica (Maika Monroe) has been gifted a swanky apartment in Manhattan and invites Frances to room with her.

One day Frances finds a green handbag on the tube and, assuming someone has left it and finding no underground staff around, decides to return it in person the following day. The owner’s name and address are inside. Erica is appalled. ‘This is Manhattan! When we find a bag we call the bomb squad!’

Erica needn’t have worried on that count. The contents of the bag look harmless enough and Frances returns to the bag to a grateful, gracious, cultured sixty-something woman who has instant plans to provide poor Frances with a surrogate mother. They bond over their losses, Greta her husband (she plays the piano in sorrow) and her absentee daughter, and Frances her mother. When Greta complains she is lonely, Frances offers to help Greta find a suitable rescue dog. This is not what Greta had in mind, but, Greta reasons, adopting a dog will tighten the bond between the two women. 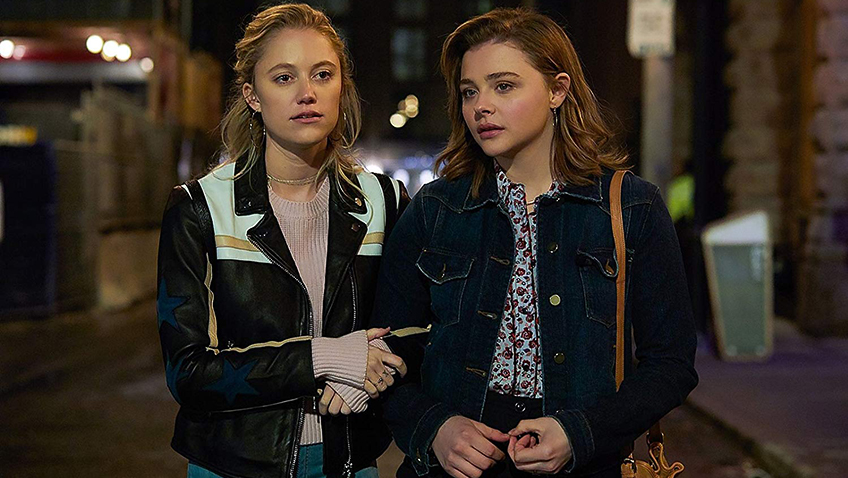 Greta tells Frances that her daughter lives in Paris and from time to time Frances hears Greta talking to her on the phone. When she complains that everyone leaves her, Frances reassures her that people have jokingly commented that Frances sticks around like gum.

When Frances turns down an invitation to a great party to have dinner with Greta, Erica begins to find the whole thing creepy. Greta is defensive and storms off to her new friend’s. But that evening, when looking for some dishes to set the table, Frances finds something far more sinister. Only partly feigning illness, she goes home and confides in Erica. It is not even half way through the film and Frances decides to have nothing more to do Greta. If only Greta felt the same.

If Greta felt the same, there would be no second half to this film. But in one of Huppert’s priceless moments, she approaches Frances chewing gum as a kind of declaration that she intends to stick around. When she spits the gum into Frances’ lovely hair, it is a punishment for breaking her promise, but you have to wonder whether this inspired touch would have been in the script. 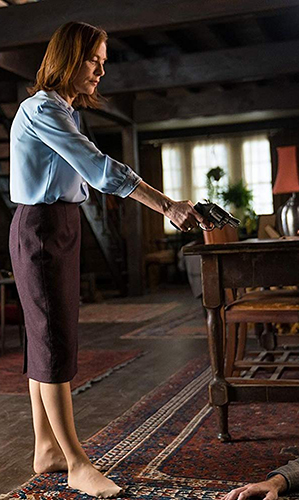 Greta is one of those old-fashioned psychological thrillers where you can see everything coming a mile away. It’s probably sillier than it is scary, although the dread factor is there for those who are squeamish.

While she is one of the most prolific and arguably the greatest French actress active today, Huppert is probably best known in the USA for Elle in which she plays another disturbed character at home with violence. That film, though ‘X’ rated, and made in French was directed by Paul Verhoeven still popular enough from films like Basic Instinct and Total Recall to attract audiences – along with a lot of controversy and hype – to Elle.

In addition to the performances, Greta has some unforgettable imagines, including a severed finger, a metal Eiffel Tower rattling like a lock on a trunk, a dog happily sipping milk from his bowl and a Private Detective sliding down the basement stairs.

This PI is played by Stephen Rea, now 72, nominated for an Academy Award for Jordan’s early film, The Crying Game. Perhaps his detective should have retired, for he seriously underestimates this little old lady when hired by Frances’ businessman father to find her. But it is Jordan who missed a trick with their rather disappointing meeting. One might recall a similarly tense encounter in George Clooney’s satirical thriller Suburbicon in which Insurance loss adjuster Oscar Isaac proves no match for Julianne Moore. That encounter too, was too fleeting given the entertainment value in the sparks flying across the room.