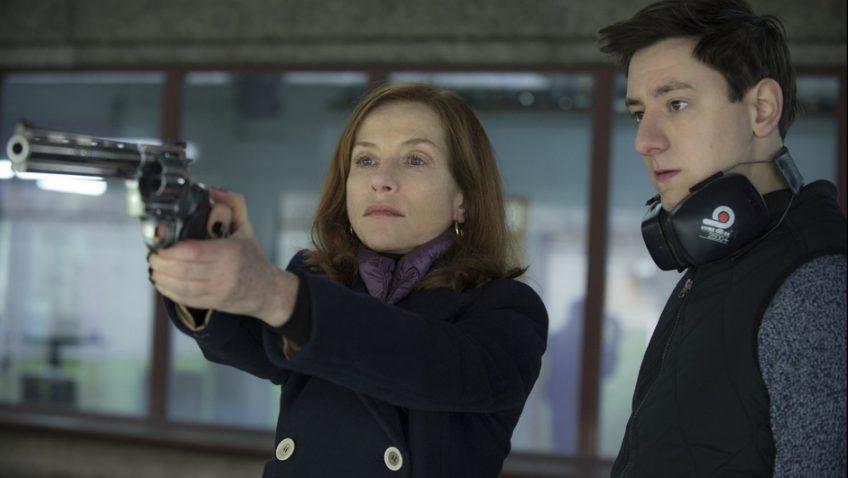 A seductive film that will divide opinion

Paul Verhoeven’s Elle has a neo-noir, tense atmosphere, well-crafted scenes and boasts an assertive, provocative, financially independent female lead character that has people talking. It is only when you try to figure out what the film is saying that the problems arise.  Almost unanimously, male critics are heralding the film for its protagonist, Michèle Leblanc (Isabelle Hubbert) who refuses to be victimised by a rape or by any of the severely flawed men in her life.  That this refusal requires Michèle to be more ignoble than the men – and women – around her is irrelevant.  For in Elle Verhoeven, the director of Basic Instinct, wants to remind us that, at 78, he can still épater la bourgeoisie by blurring the boundaries of sexual desire, deviance and anything remaining taboo. While Emma Stone triumphed over Huppert for Best Actress at the Academy Awards, in Michèle’s world, Stone’s Mia wouldn’t stand a chance. Based on the novel Oh…. by the prolific writer Philippe Djian (Unforgiveable, Betty Blue) the film begins with a rape that makes you jump in your seat. The victim, the well-groomed and dressed fifty-something Michèle Leblanc, composes herself, sweeps up the broken glass and has the locks changed as her sole companion in the large villa, a passive cat, looks on.

While Michèle is busy running her X-rated digital animation company with her partner Anna (Anne Consigny), she is haunted by text messages from her assailant that suggest he is watching her. She becomes suspicious of one of her employees when she sees her face on a particularly nasty bit of animation. While it may make male critics feel better that Michèle rises above her assault, it is perverse to argue that she refuses to become a victim. A woman is always the victim of rape. Traumatised, Michèle replays the rape in her mind, and it takes us a second to realise that what we are seeing is instant replay, not a new rape scene.

But Michèle is raped again. When, this time, she unmasks the intruder in the struggle, she makes no further efforts to tighten security.  Instead she provokes her assailant to the extent that when he ultimately pays the price – though crucially not at Michèle’s hand – he sincerely asks, ‘why?’ To him, (and he has a point), it is a game that Michèle, bored with the usual sado-masochistic sexuality, consented to play.  This is a spoiler, so if you have not seen all the publicity surrounding this film that gives away the rapists’s identity do not read on. The handsome, well-off businessman (Laurent Lafitte), twenty years her junior, is an unlikely rapist. He is married, ironically, to a beautiful, devout Catholic woman (Virginie Efira, Up for Love) who seems to hold the final trump card. Behind every man there’s a woman.

But Michèle’s understandably fraught state of mind from the rape does not explain the rest of her conduct. This, Verhoeven and screenplay writer David Birke seem to suggest, is due to child abuse, and here’s where the psychological muddle sets in.

Why Michèle does not go to the police is bound up with who she is: the daughter of a serial killer from Nantes whose name is linked with a photo of Michèle aged about 10 and some suspect she was not a victim, but an accomplice. When Michèle is not busy at work, she is busy hurting people – including her 80 year-old mother Irene (Judith Marge) and her ex-husband, Richard who somehow keep returning for more.

Nor does Michèle conceal her opinion of Josie (Alice Isaaz), the girlfriend of her good-hearted, but dim-witted son Vincent (Jonas Bloquet) who has trouble keeping his low-paid service job. Michèle offers to finance an apartment for the couple after learning that the demanding Josie is pregnant. When Josie gives birth to a Black child, Michèle berates Vincent who insists that the child is his. This adds resonance to Michèle’s utterance, ‘Sometimes I look at that big lout that came out of my stomach and I don’t recognise him.’ Could it be that Vincent wants a family life where he can show a young boy the love he never felt?

After attempting to sabotage Richard’s new relationship there is clearly more than a double standard in Michèle’s own affair with Robert (Christian Berkel) Anna’s husband.  Given that Anna appears to be Michèle’s only friend, as well as her business partner, this affair – which is purely sexual – seems particularly sociopathic.

The protagonist of Djan’s novel is in her fifties.  When, according to the hype, no American actress would take the role, Huppert, who is 63, jumped at the chance and Verhoeven made his first film in French. One of the world’s greatest actresses, Huppert certainly makes this role her own and carries the film. Yet she has taken on more challenging roles, notably, in La Cérémonie, The Piano Teacher and last year’s Things to Come, a performance so subtle, instinctual and perceptive that it is impossible to believe she is acting.

Elle might have worked as a satire of nihilism, but it is not, as it is claimed, a tale of revenge. Michèle is not out for revenge on her assailant, and, given her lonely, destructive and self-destructive life, she has not been successful in revenging the damage done to her by her father.

The intentional humour in the script and in Huppert’s often flippant reactions jars with the brutality of the rape scenes. The film is so well made, beautifully shot and compelling, that it seduces the viewer into believing we are watching something profound. But nothing in the film has any consequences and all the relationships remain in tact, as though Michèle can get away with anything. She and Anna might be strolling through a graveyard in the final scene, but Michèle has steeled herself against fear, and it seems against, compassion.