Home / LIFESTYLE / REVIEWS > / FILM REVIEWS / Nun of this…Nun of that 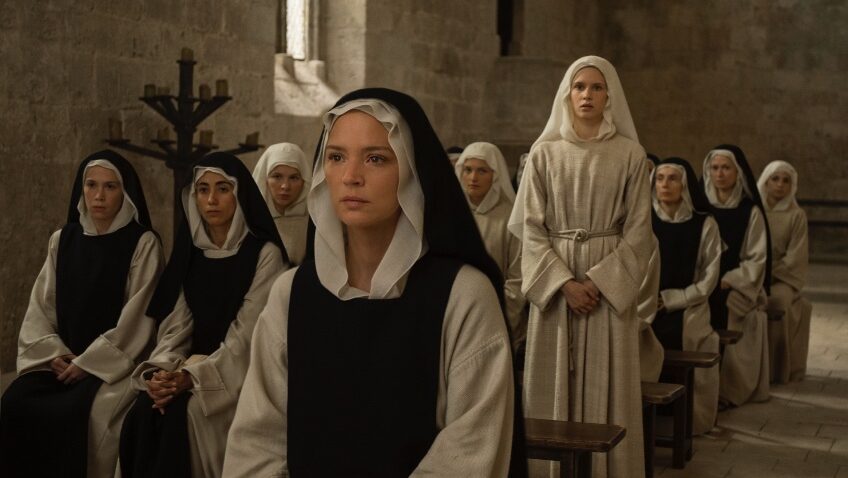 Nun of this…Nun of that

Whether or not you enjoy Benedetta depends on the extent to which you can keep your sense of humour about a story that relies on scholarly historical research to legitimise nudity, sexual exploitation and the recent flood of films about lesbian relationships.

We are told the film is based on Judith C Brown’s Immodest Acts: The Life of a Lesbian Nun in Renaissance Italy and even the names of the two allegedly historic lovers, uncovered in Brown’s research, are used in the film. The story, with its mix of fanatical faith and fornication in a convent with the plague raging outside is certainly fascinating and visually gripping. Like all adaptations, however, what happens to the source material is up to the director, in this case Paul Verhoeven (Elle, Showgirls, Basic Instinct) and the scriptwriter, in this case, David Burke (Elle).

Although the Renaissance was well over in Italy by the 17th century, when the story takes place, Ms Brown’s book seems rigorously researched. Little Benedetta Carlini (Elena Plonka), from a well-to-do Italian family, enters a convent in the Tuscan town of Pescia in response to a promise that her father, Giuliano (David Clavel), made to God, when his sickly baby daughter was spared through prayer. A telling incident on the way to the convent might have encouraged little Benedetta to rely on her fervour and “special relationship” with Jesus to survive in a merciless world.

The little girl gets out of the carriage to pray at a roadside statue of the Virgin Mary, kneeling in her fancy dress with a small, wooden Virgin Mary doll in her arms. The family is suddenly surrounded by highwaymen, one of whom rips off her mother’s necklace with his sword. Little Benedetta orders the men to return the necklace, or The Blessed Virgin will punish them. As they laugh, a bird defecates in the swordsman’s eye and the superstitious thieves return the necklace and ride away.

We learn that 17th century convents were like posh boarding schools for life, and there is polite haggling between Abbess Felicita (Charlotte Rampling, excellent) and Giuliano Carlini over Benedetta’s dowry. The Abbess has the trump card – ‘is the bride of Christ not worth more than 100 scudi?’ – and wins.

Benedetta emerges unscathed from the early bullying, loneliness, the exchange of her silk dress for a sackcloth and the removal of her Virgin Mary doll. She is armed with her piety, which has already led to some minor miracles and the awe of the other nuns. The sceptical Abbess has her number, however, and warns Benedetta, that she is intelligent, but intelligence can be dangerous.

We fast forward 18 years and Benedetta’s family is present to celebrate her marriage (enacted, quite literally on the stage like a passion play) to Jesus at a banquet financed by Mr Carlini. At the feast, an incident changes Benedetta’s life forever, when a pretty, though filthy and unkempt waif, Bartolomea (Daphne Patakia) breaks into the convent to escape her sexually abusive peasant father. Taking pity on the girl, Benedetta persuades her father to pay Bartolomea’s dowry so she can escape her predatory father (who is also paid off).

Benedetta’s frequent visions of a handsome Jesus who appears as her saviour, tormentor and seducer (“wherever I am, there can be no shame”), correspond to her initially cautious reaction to Bartolomea’s sexual advances.

Benedetta’s awakened sexuality brings her closer to God, particularly during one “vision” when Jesus on the cross awakens her and calls her to him. She steps on the cross to match her hands and feet to his, so their two bodies are one. Shortly after, she appears to the stunned convent with physical signs of the stigmata. Verhoeven manages to present these episodes ambiguously, but it is difficult to imagine a woman intentionally cutting holes through her hands and feet and not either dying from sepsis or screaming in agony for weeks without morphine or a local A & E, neither of which is available to the quickly healed nun.

When the stigmata is verified by the local bishop, Benedetta is elevated to Abbess and given Felicita’s large private room. Here Bartolomea finds and uses the old whittled down Virgin Mary doll to penetrate her virgin lover. While Felicita warns her resentful, illegitimate daughter Christina (Louise Chevillotte) to accept the decision, Christina is outspoken about Benedetta’s unholy sex and her suspect claims to saintliness. With the plague raging outside, the townsfolk back Benedetta, hoping she will spare them. We learn that the plague did pass over Pescia, but not before the womanising Nuncio (Lambert Wilson) tries to have Benedetta burnt at the stake.

While the story is based on Brown’s fictional book, it is interesting that adult Benedetta is played by Virginie Efira (An Impossible Love, Up for Love) who had a small, but significant role in Elle, Verhoeven’s last film, written by David Burke, and starring Isabelle Huppert as the eponymous woman who also played with dangerous sexual fantasies. Efira plays the motherly, fervent Catholic wife of Elle’s rapist, but her role in her husband’s sordid sex life is the surprise reveal of the film.

It could be that Verhoeven, and Burke had known about Brown’s book while making Elle, and they had already found their pious beauty for Benedetta when filming Efira in that film in 2015. Then again, Verhoeven might have seen Catholic writer-director Ulrich Seidl’s 2013 release, Paradise Faith. In that unsettling, deeply disturbing film, a lonely, middle-aged Austrian housewife, married to an invalid, is devoted to Jesus, an unhealthy obsession that blurs the line between saintliness and masochistic perversity.

Seidl’s film, part of a hard-going but powerful trilogy, never feels exploitative like the gratuitous sex and nudity in Benedetta. By the end, Benedetta feels and looks like Ken Russell was resurrected to do a sequel to the The Devils set in Pescia.