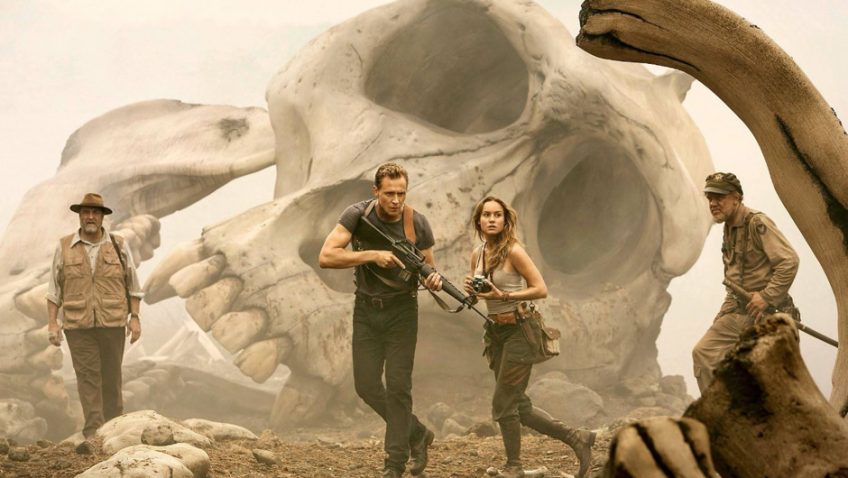 is, you might imagine, one of those block-busters that, would be easier to skip than sit through, particularly when life is getting shorter and the number of things to do ever expanding.  But you can’t always tell a book by its cover. It’s not the subject (there have been enough mediocre reboots of the 1933 classic; the A-list cast (many of whom play underdeveloped characters) or the often preposterous screenplay that make this mega-budget action film worth seeing. It is the wonderful monsters, terrific use of locations (in Hawaii, Vietnam and Australia) and an ever important message about the earth’s endangered species.

, which is set in the 1970s, is intended to entertain like a B-movie from the 1970s, complete with that decade’s cultural and political influences.  So we have music from the ‘70s; a liberated woman; references to Apocalypse Now; the last humiliating months of the Vietnam War and the emergence of Watergate. When psycho-geographer and lost-island explorer William ‘Bill’ Randa (John Goodman), prepares to make a desperate pitch to his last-unburned bridge on Capitol Hill to fund an expedition, he exclaims: ‘Mark my words: there will never be a more screwed up time in Washington. But we can’t let that stop us.’   And it doesn’t.

Like an heir hunter on the scent of an aristocratic, eccentric bachelor, Randa has gotten wind of covert images of a land ‘where God didn’t finish creation; a place where myth and science meet.’ The besieged Senator (Richard Jenkins) begrudgingly gives his consent when Randa’s resourceful assistant (Corey Hawkins), a young, black Yale University geologist, utters the buzz words. ‘In three days the Russians will have the same images as us,’ he points out.  ‘But this is it,’ the Senator acquiesces, just as Randa insists upon a military escort. 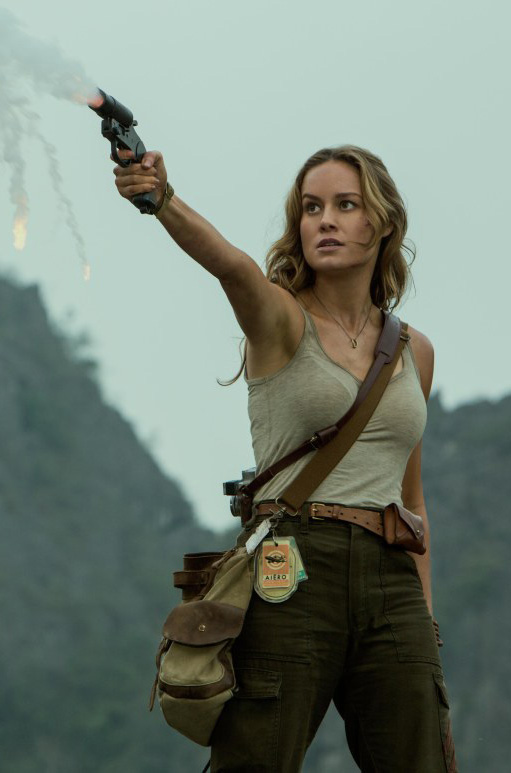 The military escort is a mixed bag of Vietnam veterans, some of whom want to go home, and others who cannot go home again.   A British mercenary tracker named, rather obviously, James Conrad, is found, even more obviously, in a Southeast Asian den of iniquity where he beats off three thugs who interrupt his pool game as though auditioning for the next James Bond.  This ‘decommissioned’ and disillusioned tracker might be Tom Hiddleston, but he is no James Bond.  Conrad is a liberal with respect for the lady in the expedition and for his environment.

Not so Preston Packard (Samuel L Jackson) a hardened military commander who has taken the loss of Vietnam personally and seems to want another bite at the cherry.  He holds a fatal grudge against Kong from the outset for reacting to force as any invaded native would.  The only female in the crew – and the closest thing to Fay Wray this modern rendition of Kong offers – is anti-war photographer Mason Weaver (Oscar winning Brie Larson).  Her feisty independence, physical endurance, quick thinking and androgynous name play against her tight, low cut T-shirts and nurturing relationship with Kong, who, in a nod to 1933, saves her with his huge paw.

Skull Island is never mentioned in the 1933 original, but in the two remakes (1976 and 2004), the spin-offs, including King Kong vs. Godzilla and King Kong Escapes, and in the various books, the famous gorilla’s island home is presumed to be an island in Indonesia. It is always enveloped in violent storms; and is a jungle in which Kong is a kind of deity lording over other prehistoric creatures which coexist with lost primitive tribes. Director Jordon Charles Vogt-Roberts retains all of this mythology, although he claims his monsters were inspired by the Japanese animated fantasy film Princess Mononoke.  We cannot argue, but surely an influence also has to be Jurassic Park as Skull Island is one big outdoor safari park of prehistoric creatures, including giant spiders that attack mercilessly from above and an apathetic giant hairy mammoth that emerges from the water like a submarine.

Vogt-Roberts is a curious choice for director. His two previous features (which he wrote and directed) are an entertaining low budget coming-of-age movie and a respectable film about a stand-up comedian, respectively.  For Kong: Skull Island

Yet it is the script, and particularly some of the characterisations, that cause the big problems.  Jackson compares his character to Captain Ahab from Moby-Dick, which is accurate, but not very helpful in the context of this movie.  Why would the helicopters fly right into Kong, who can obviously bat them away with his long arms and crush them with his paws?  When you attack an animal, it’s obvious to everyone but Packard that he will retaliate.  And why would Randa (if he had the authorisation) bomb the island to ‘force Kong out in the open,’ before they have even done reconnaissance and confirm such an animal is on the island?  More puzzling is why, when Conrad has found the desperate survivors the only way to reach the prearranged escape point in time, Packard refuses to go? He insists on risking the remaining lives for a dead soldier and supplies left in his chopper.  Moreover, he orders this suicide mission against the advice of Conrad and Hank Marlow (John C Reilly) an American WWII veteran left on the island since 1945 and long presumed dead by all but his patient family.  If anyone knows the island and how to survive on it, it is Marlow, but Packard ignores his warning and, rather incredibly after what they have witnessed, his men follow.  It doesn’t help that everyone with evidence of Kong’s true nature shouts at Packard, instead of trying to talk to him rationally.

The reason for Packard’s irrational decision is, of course, an excuse to take the group into the area of the island that gives the island its ominous name.  This is the part of the island where monster lizards, resembling larger versions of the Taotie in Zhang Yamou’s recent film, The Great Wall, reside. Unlike Kong, they love to swallow humans whole.  The giant monster lizard is Kong’s mortal enemy, as a fight to the death (a kind of Kong vs Godzilla) shows.  Vogt-Roberts ensures that our initial view of Kong changes along with that of Mason and Conrad, who realise he is a sympathetic, tragic and misunderstand hero.  He also successfully conveys the message that, to paraphrase the early 19th century Amazon explorer Percy Fawcett, we risk destroying the very thing we have come to explore.