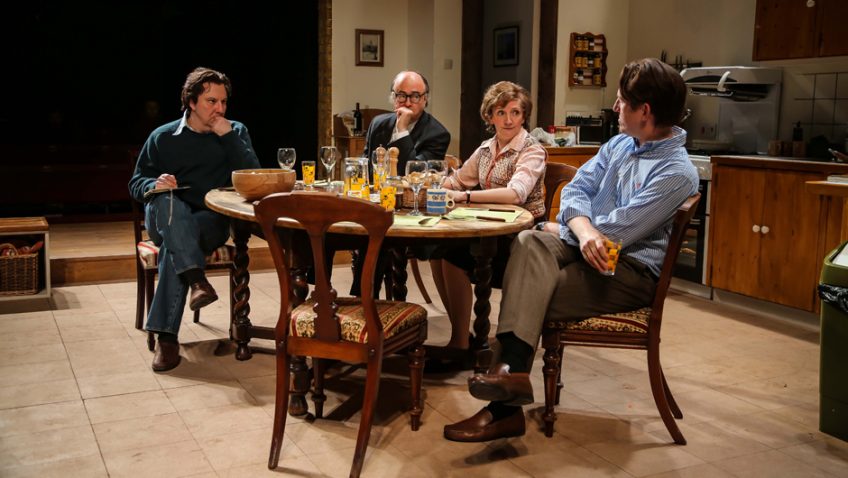 Limehouse is by Steve Waters, who wrote Temple, which was about the occupation of St Paul’s churchyard by the anti-capitalist movement. His imagined version of a real event was seen at the Donmar with Simon Russell Beale as the Dean.

Imagined meetings between famous politicians have proved popular on television and in the theatre. The Gang of Four (as the press called them) met at David Owen’s home in Limehouse, East London, in 1981 to discuss the setting up of an alternative party and founded the Social Democratic Party.

Britain was in crisis. The nation was divided. Margaret Thatcher was extremely unpopular. The Labour Party was led by Michael Foot struggling to hold the Labour Party together

Williams and Rodgers found it most difficult to make the break. They were fearful of the damage they would do, feeling they might destroy the Labour Party completely.

The actors, directed by Polly Findlay, apart from debating, cook, eat and wash the dishes.

Today, Britain is divided by Brexit and immigration. A breakaway is once again highly likely. The Labour Party is unelectable so long as Corbyn remains leader. A realignment of British politics is not impossible.

There is a wistful epilogue with the houselights up. Mrs Debbie Owen (Nathalie Armin) wonders what would have happened if Shirley Williams had become Prime Minister?  How different would things have been?

The Social Democrats might have succeeded had Denis Healey come on side.