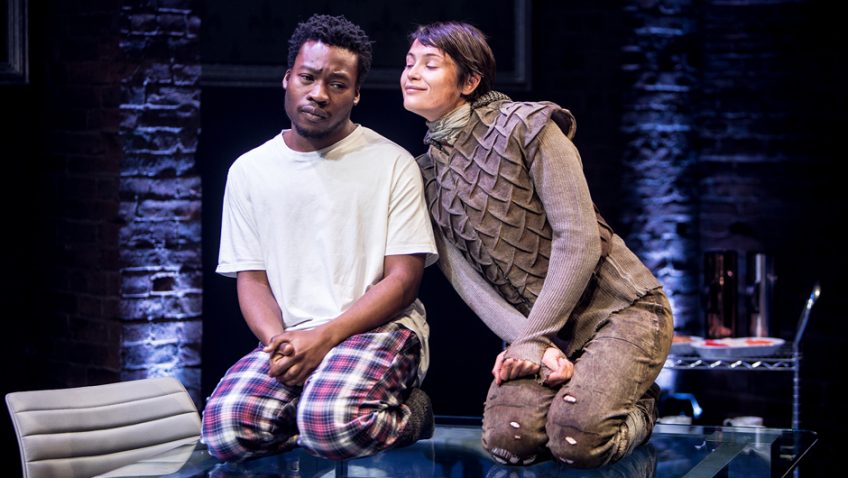 Nineteen-year-old Jeanne d’Arc was condemned to death as a heretic in 1431. Twenty-four years late her rehabilitation was started with the consent of the Holy See. Five centuries later Joan was canonized in 1920 by Pope Benedict XV.

Bernard Shaw’s play, drawing freely on history and legend, had its premiere in New York in 1923. Its first performance  in London was in 1924 with Sybil Thorndike as the Saint. I have not seen Shaw’s anachronistic chronicle acted in medieval costume  for a very long time. The most recent productions have all been updated to modern times.

The only 15th century personage in Josie Rourke’s refreshing and much-cut production, designed by Robert Jones, is Joan herself. The very first image, before the play begins, is of her in chain-mail with sword at prayer.

The men all wear business suits. The actors sit at a huge boardroom glass-topped table, which is on a turntable. Behind them on the wall a television screen broadcasting news alternates with a variety of familiar medieval paintings

I have seen three great Saint Joans: Siobhan McKenna, Joan Plowright and Annie-Marie Duff. McKenna was the most spiritual.

Gemma Arterton is the loveliest Joan, the most flirtatious, the most seductive, the most girly, a radiant sweetie, a good person in a wicked world.

Obdurate, Joan does not heed the warnings of the Archbishop (Niall Buggy) and Dunois (Hadley Fraser) and listens only to herself. “I know I am right,” she says. “They could not burn a woman for speaking the truth.”

The English want to burn her. Her nationalism is a threat to the feudal lords. She is bad for morale. She is winning too many battles. The Roman Catholic Church wants her burnt. She is a threat to them, too. She acts as if she were the Church. She wrecks the social order. Her death is a political necessity.

“It is a terrible thing to see a young and innocent creature crushed between these mighty forces, the Church and the Law,” admits the Inquisitor (Rory Keenan) and acknowledges that she is innocent.

“Oh, quite innocent. What does she know of the Church and the Law? She did not understand a word we were saying. It is the ignorant who suffer.”

The trial and an earlier scene, when Cauchon (Elliott Levey) and the Earl of Warwick (Jo Stone-Fewings, so very English) settle their differences, are intellectually and theatrically satisfying.

Warwick has a nice line in cynicism: “By all means do the best for her if you are quite sure it will be of no avail.”

Fisayao Akinade’s Dauphin is the campest Dauphin since Kenneth Williams.

Shaw’s redundant Epilogue rarely works and has been ruthlessly cut  so that only the confession by the hysterical and slightly mad  John de Stogumber (movingly delivered by Richard Cant) remains.

Josie Rourke’s enjoyable and well-acted production will have a live broadcast on 16 February and encore screenings from February 17.