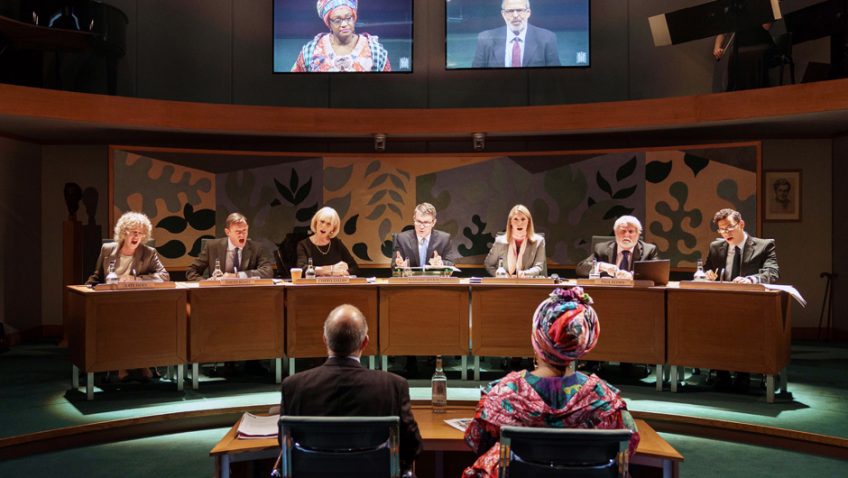 Committee is an abbreviation.

The full title is The Public Administration and Constitutional Affairs Committee Takes Oral Evidence on Whitehall’s Relationship with Kids Company.

Welcome to Portcullis House and a musical drama of accountability and financial mismanagement. The music is by Tom Deering. The book and lyrics by Hadley Fraser and Josie Rourke are edited from the parliamentary transcript of the oral session on 15 October, 2015.

4 million children are living in poverty.

Kids Company was founded by Camila Batmanghelidjh, a charismatic fundraiser, in 1996 to provide practical, emotional and educational support for vulnerable inner city children and young people. It closed in 2015, bankrupt.

Batmanghelidjh and her chairman Alan Yentob (played by the charismatic  Sandra Marvin and Omar Ebrahim) appear before a committee of MPs to give evidence. They deny the charity was badly run.

Asked what her qualifications are, Batmanghelidjh, who had trained as a psychotherapist, replies,” a lifetime’s experience.” She thinks the charity was a success, despite going bankrupt. The problem was there were just too many children to cope with.

Alexander Hanson is cast as Bernard Jenkin, who heads the committee, which includes a very patronising Cheryl Gillian (played by Liz Robertson)

Jenkin insists he is not chairing a show trial. “We want to learn,” he argues. The figures don’t add up. There were said to be 75,000 children; but on paper there were only 1,900. How was the £42 million actually spent?

The MPs fail to get Batmanghelidjh to answer their questions. Always evasive, she offers instead a torrent of words.

Committee is not really a musical. Directed by Adam Penford, it is much nearer to a staged choral performance. The lyrics are extremely well sung and pleasant to listen to but there were times, quite a few, when I wished the script were being spoken rather than sung.