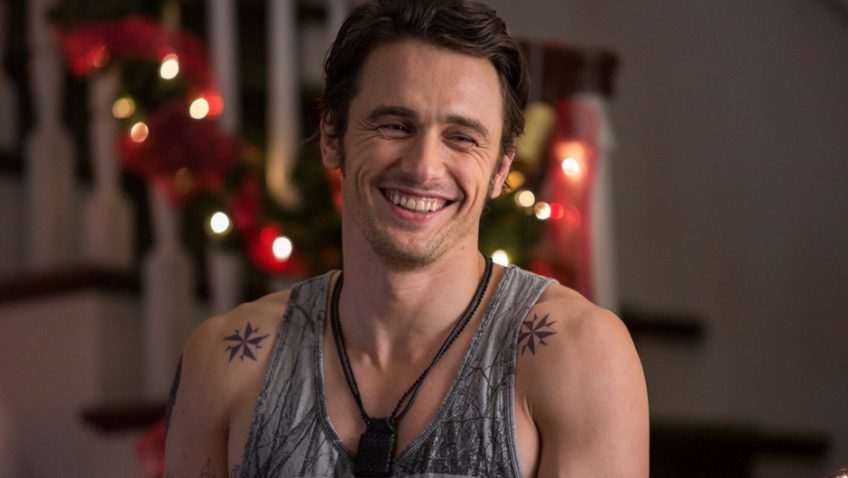 As a writer or co-writer John Hamburg has made a fortune from a simple, but fairly universal premise.  Every fiancé is vulnerable when introduced to his lover’s protective, judgmental father.  All Hamburg had to do was exaggerate the fiancé’s vulnerability by making him a male nurse and the father-in-law’s power by making him a macho former CIA counterintelligence officer.  Now that the trilogy, Meet the Parents, Meet the Frockers and Little Frockers has run its course, it’s time for Hamburg, who now directs, as well as co-writes (with Jim Herzfeld), to give a new spin to the tried and true premise in Why Him? Why Him? relies on the same tension as the trilogy, but the players are reversed. Instead of Meet the Parents, a more descriptive title could have been Shock the Parents. The fearless fiancé (James Franco) is the one intimidating the future father-in-law, a square, conservative technological dinosaur played by Bryan Cranston. The result, a predictable, stale, toilet-humoured throw-back to Meet the Parents, is lifted to higher plane by the brilliant Bryan Cranston and by James Franco – doing what he does best.

In a prologue we eavesdrop on an amorous conversation between Stephanie (Zoey Deutch), a bright, pretty Stanford University student, and her older boyfriend, Laird Mayhew (Franco) who wants to pay her a visit.  This is a teaser, as we know exactly what is going to happen in the scene that follows when Stephanie contacts her family in Grand Rapids, Michigan, via Skype.  Still in her dorm, Stephanie is wishing her dad, Ned (Cranston), a happy 55th birthday at a cheap, pizza restaurant.  Also seated at the table are Stephanie’s mother Barb (Megan Mullally), her 15-year-old brother Scotty (Griffin Gluck) and a few family friends. Suddenly, in the background we see Laird coming in, playfully removing his trousers and oblivious to the presence of Stephanie’s family.

Stephanie is, for the first but by no means the last time in the film, caught between her love of Laird, whom she continually defends, scolds and apologies for, and her devotion to her family. Barb is now determined to meet her daughter’s first serious boyfriend. Ned, who is bemused that his little angel has kept her boyfriend a secret from him, reluctantly goes along, as does Scotty.   They have made a reservation at a low price motel, but Stephanie insists they stay at Laird’s house for until Christmas.

Ned and Barb are not looking forward to roughing it at some student digs, but they need not worry in that respect.  In another respect, they have cause to worry: their innocent daughter turns out to be not dating, but engaged to a heavily tattooed, extremely tactile, completely uninhibited and pathologically honest Silicon Valley billionaire who seldom wears a shirt and includes some form of the ‘F’ word in every sentence.

The modernist, minimalist Palo Alto mansion where, Laird lets slip, Stephanie and he are cohabitating is, not surprisingly, a smart house.  It’s also paperless and that includes the high-tech Japanese loo.  This leads to the inevitable toilet scene that seems de rigueur if Jonah Hill is involved (he has a story credit).  Somehow, Cranston’s talent comes to the rescue even here, and makes the scene less painful.

More comedy is provided by Laird’s exotic estate manager, martial arts trainer and confidant, Gustav (Keegan-Michael Key) and Justine (Kaley Cuoco) a ubiquitous Wi-Fi voice emanating from the ceiling that acts like an invisible secretary and PA to anyone in the house that might need some help. The film’s action and tension are driven by Laird’s need to win over Stephanie’s parents because the harder he tries, the more he alienates them. Only Scotty is enthusiastic because his future uncle – who writes code and aps – is so cool!  Scotty, whose ideas are ignored by his preoccupied dad, has found an audience in Laird whose staff are probably not much older than Scotty.  Contrived though it is, there is a rather nice sub-plot to the film as Ned’s printing business is in the doldrums, while Laird’s paperless world is, despite fierce competition, booming. Do the two men in Stephanie’s life have something else in common after all?

Barb and Ned comes to realise that Laird is actually a sweet, generous and brilliant young man who adores and respects their daughter to the point that he will not marry her without Ned’s permission. His lack of social skills and obsessive need to be loved are due to his dysfunctional childhood.  Laird might be more financially independent than Ned, but he is in search of a father, as well as a father-in-law.  One part of Ned recognises Laird’s positive qualities; the other cannot accept him as son-in-law material.  When Ned discovers that Stephanie plans to drop out of school to manage Laird’s charitable foundation, the Flemings return to Michigan for Christmas.

If you are in the mood for some entertaining, mindless Christmas fun, you could do worse than Why Him? You might groan more than you laugh, but James Franco’s performance is worth the price of admission.  For a guy whose Alma Maters include Columbia, NYU, and Yale, it might be ironic that Franco’s most memorable roles are his hopeless stoner in Pineapple Express and his swaggering, rapper in Spring Breakers, a gangster who charms the middle class girls on spring break.  There is something of that bad-boy-charmer chemistry between Laird and Stephanie, but what is happening between Laird and Ned feels like a genuine bonding.