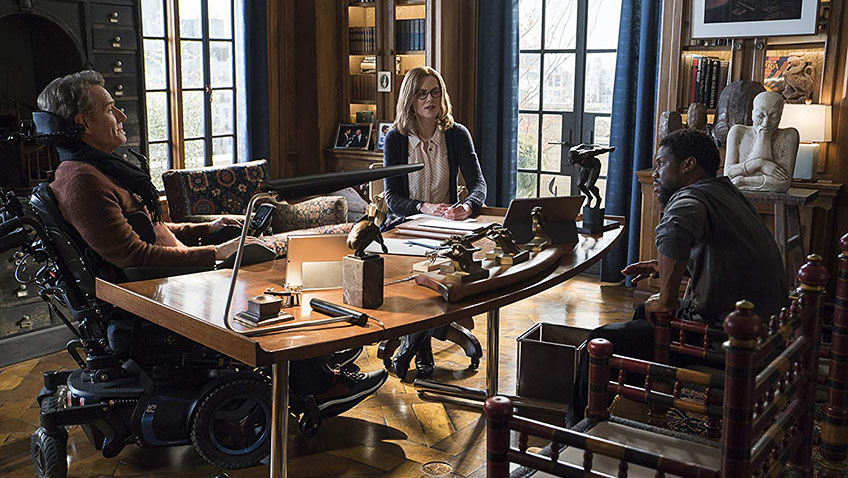 Back in 2012, when the hit French comedy, Untouchable was released in the UK, I predicted that there would be an American remake and that it would be even more sentimental than the original. And five years later, we have Neil Burger’s (Divergent, The Illusionist, Limitless) The Upside

Although the French comedy is loosely based on the true story of an Algerian ex-con who is hired to care for a wealthy, cultured white quadriplegic, it still felt familiar after films like Neil Simon’s 1968 adaptation of his Broadway play, The Odd Couple starring Jack Lemmon and Walter Matthau. The Upside

does not escape this feeling of déjà vu. Bryan Cranston and Kevin Hart make a wonderful odd couple and Nicole Kidman is a classy addition to the buddy movie structure, but the stereotypes still grate, and the socio-economic messages are still hitting us over the head with too blunt an instrument.

If you saw Untouchable there are few surprises here, although Phillip’s modern, swanky penthouse adds more to the fairy tale nature of the story than the staid, dark wood-panelled mausoleum in the original. Bryan Cranston plays Phillip Lacasse, a savvy investor with cultivated taste. He has a good ear for music, an eye for art investments, and a taste for fine wine. This is just as well, as a paragliding accident that killed his wife left the rest of his body paralysed and longing to join his beloved wife.

Once the most independent of men, Phillip is now dependent on Yvonne (Kidman), a high flier who now serves as Philip’s financial manager; a physical therapist and a live-in carer. When the post of carer becomes vacant, Yvonne favours the sycophants with the rehearsed speeches and nursing experience, while Philip favours the candidate who is the least likely to keep him alive or resuscitate him.

Enter Dell Scott (Kevin Hart) a younger, black ex-con who owes his estranged wife child support and cannot even take care of himself let alone a quadriplegic. As a condition of his parole and in order to qualify for unemployment benefits, Dell has to find a job – or go through the motions. Dell says all the wrong things and does not hide his impatience when all he wants is his form signed. He is bemused when he finds himself with a luxurious living suite in the penthouse, gourmet meals and a job that pays more in a week than he would make in a year on minimum wage. 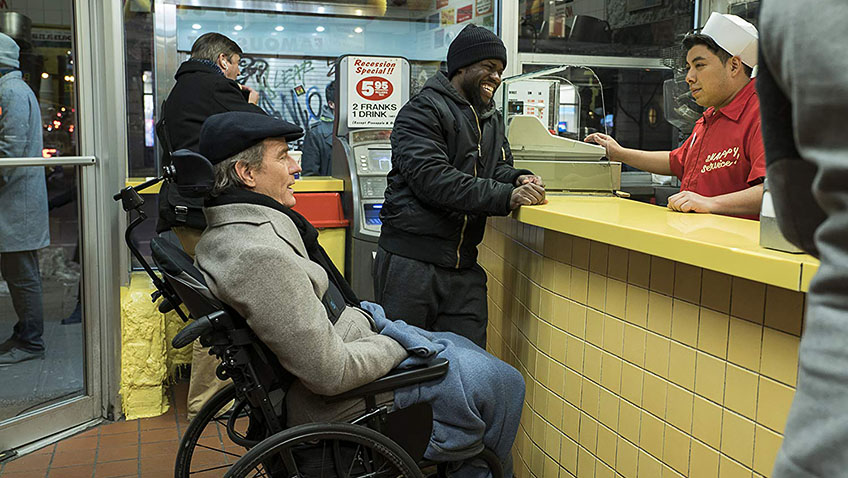 Bryan Cranston and Kevin Hart in The Upside

All this is, of course, as crowd pleasing as the story of a homeless guy who is given what turns out to be a winning lottery ticket when he was begging for change to buy drugs. There is a guilty pleasure in watching Dell’s reaction to this foreign way of life – until it becomes so formulaic that you forget it is based on a true story.

As in the original film, the film’s tension is the chalk and cheese relationship (complete with an excruciating scene in which a disgusted Dell has to change his employer’s catheter bag), and the story arc is how each man fulfils his respective potential by learning from one another. Here is where the stereotypes, inherent in the two men’s socio-economic starting point, gain momentum.

Whereas Philip is left to rot and wallow in self pity in his penthouse, Dell takes Philip for a spin in his Porsche (Philip has a garage full of expensive cars that he can no longer driver) and they end up fine dining on hot dogs from a greasy spoon, giving Philip a taste of real life. Observing how Philip spends thousands of dollars on a painting at a gallery, Dell – a budding Basquiat – paints a picture which Philip sells, presenting the astonished carer with a $50,000 cheque.

As in the original Dell does not continue painting and we here no more of his alleged talent leaving us to question the incident – is this taken from the real life story? – and what it is supposed to mean. Is it a parody on the art market (in which, as in the film business, ‘nobody knows anything’) or a chance for Philip to bring out the best in Dell and giving him the opportunities in life he never had?

In another example, again taken from the original, Philip takes Dell to the opera. He begins by annoying the audience and embarrassing Phillip and then ends up weeping to Nessum Dorma. Dell reciprocates by introducing Philip to Aretha Franklin’s version of Nessum Dorma. This kind of cross-cultural interchange continues until it feels contrived. Worse is yet to come when Dell gets a drab dinner party rocking with a spirited dance performance – because black people have rhythm and soul and are natural dancers. 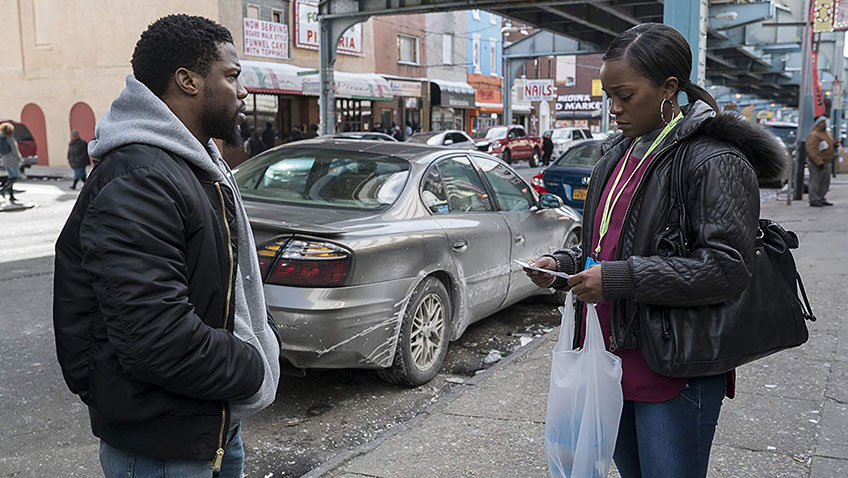 Kevin Hart and Aja Naomi King in The Upside

sub-plots and characters are added on in the American remake which feels dragged out at 125-minutes. While a nice love story is brewing under the surface between the long-suffering Yvonne and the emotionally stunted Philip, an interminable subplot is played out in which Philip, with Yvonne’s help, corresponds with a cultured, independent, but single woman named Lilly (Julianna Margulies) and the relationship is becoming serious. Naturally, Dell intervenes to move things along and engineers a lunch meeting. It is hard to know which is worse: the fact Lilly turns out to be a gold digger who has researched her blind date on the internet, but just can’t hack it with a man she has to feed, or Phillip’s sanctimonious reaction to his disappointment.

The addition of another woman, Dell’s ex-wife Latrice (Aja Naomi King) and their adorable son (Jahi Di’Allo Winston) adds little to the story and arguably detracts from any message about money buying not happiness. Latrice is so happy when the man who abandoned his family suddenly buys them a house that all is forgiven.

The addition of a third woman – Phillip’s late wife – is equally superfluous, only serving to add a heavy dose of bathos to a story that does not need it.

Another legitimate layer of objection has been raised by the disabled lobby in the on-going debate about able-bodied actors playing disabled characters. This is a tough one. The list is long (The Theory of Everything, Breathe, The Diving Bell and the Butterfly, My Left Foot, Skyscraper to list a few) because the reality of the business is simple: the film wouldn’t have been financed without someone of Cranston’s calibre and box office appeal and, to his credit, he is pretty convincing.