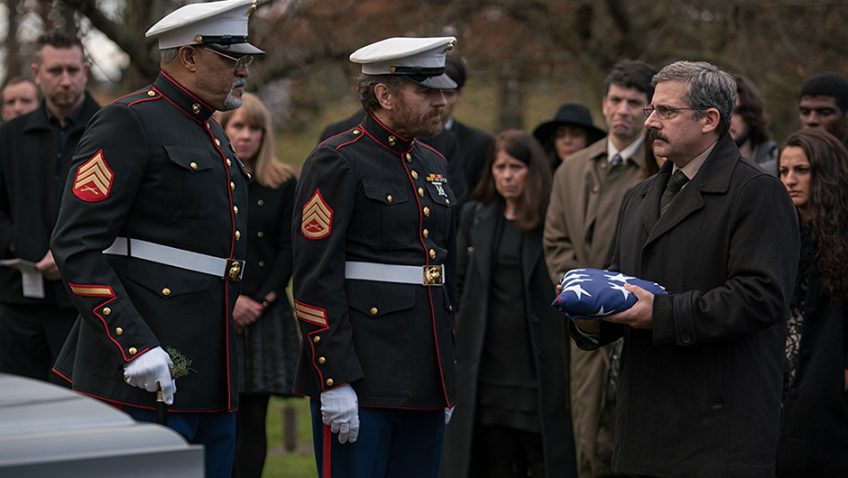 If Richard Linklater is best known to many for his gorgeous, romantic ‘Before’ trilogy, his last two films were coming-of-age comedies with autobiographical elements: Everybody Wants Some!! and Boyhood. Last Flag Flying, based on the 2005 novel by Darryl Ponicsan, who adapted his novel for the screen with Linklater, is not the filmmaker’s first political and issue-based film (A Scanner Darkly, Fast Food Nation), but it is his first film in which the protagonists are all over 55. It is also rare in being a movie about war, although here, the battles are in the hearts and minds of the veterans. A meandering road movie without much of a plot, Linklaker once again conjures up a bitter-sweet comedy-drama out of character-driven dialogue. 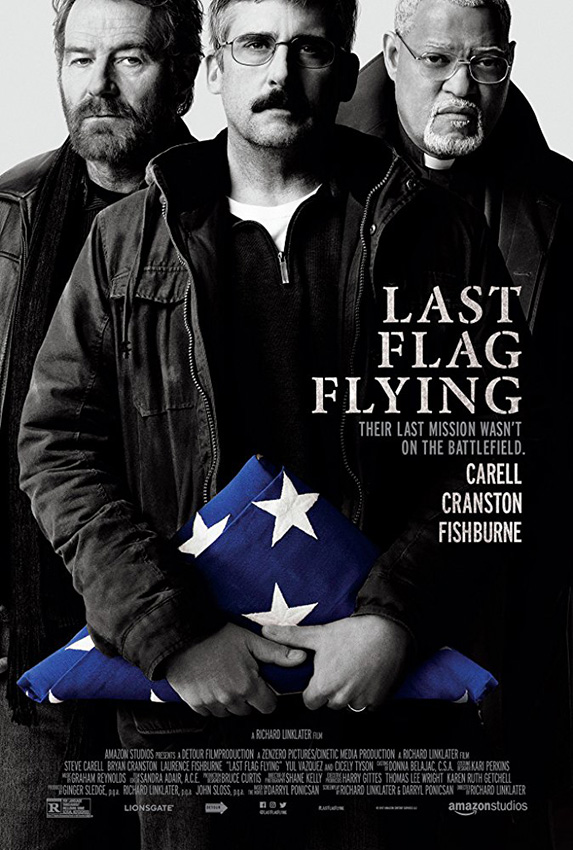 Recently bereaved former Navy corpsman Larry “Doc” Shepherd (Steve Carell) shows up out of the blue at the Norfolk, Virginia bar owned by Sal Nealon (Bryan Cranston), a former Vietnam Marine whom he has not seen in 30 years. Despite having only one customer in the bar, Sal does not recognise ‘Doc’, and is surprised to learn that Sal has used the relatively novel internet to track him down.

During the catch-up banter, a reserved and withdrawn Doc tells Sal that after his discharge for bad conduct and two-year incarceration, rather ironically, he worked as a supervisor in the stocking department at the Navy Exchange. After a night of heavy drinking, Doc tells Sal he wants to show him something, and is amazed that without asking any questions, Sal leaves the bar keys with a hung-over customer and drives Sal to his destination – a Baptist Church. There, Sal is astonished to see their old foul-mouthed, heavy-drinking marine buddy from Vietnam, Richard Mueller (Laurence Fishburne) known as The Mauler, for his use of prostitutes. Much to Sal’s delight, here he is on the pulpit, preaching fire and brimstone as Reverend Mueller.

Over dinner at Richard’s house, Doc mentions that in addition to losing his wife to cancer the previous year, he is on his way to bury his only son, Larry Jr, who was killed in action in Iraq. He has travelled from Portsmouth, New Hampshire looking for company in this grim task.

There is a palpable tension between Richard and Sal who is teasing Richard as tries to hide his past from his religious wife, Ruth (Deanna Reed-Foster). The last thing the reformed military man wants to do is spend another minute in the company of Sal. But it is Ruth who encourages Richard to accompany Doc to Washington DC in his time of need, as that is what holy men do.

The road trip is not without incident, some of it funny, some noticeably contrived. It is December, 2003, and a rent-a-car agent watching the capture of Saddam Hussein on the news, tips off the police to a large black man referred to as ‘Mullah.’ As in Everybody Wants Some!!, it is not the frequently random plot that holds your interest, but the interaction between the buddies and their often hilarious conversations that sound the way people really talk. Organically and gradually the men change in one another’s company.

That the characters are types might have been a problem, but it is precisely their recognisable pain and chemistry that gives the film is universal appeal. Sal has a metal plate in his head from an injury and is such a functioning alcoholic that it’s impossible to tell whether he can no longer get drunk – or is perpetually drunk. But the war has done something else to him. Sal has to have something in mouth or in his hands all the time, as though life is withholding something essential to him and he grabs what he can. He takes candies from waiting rooms and lobbies; eats a left over slice of cold pizza; and is always ready to have a drink in his hand or a meal in front of him. Richard walks with a cane to help his limp from a smashed leg. Doc has a broken heart. 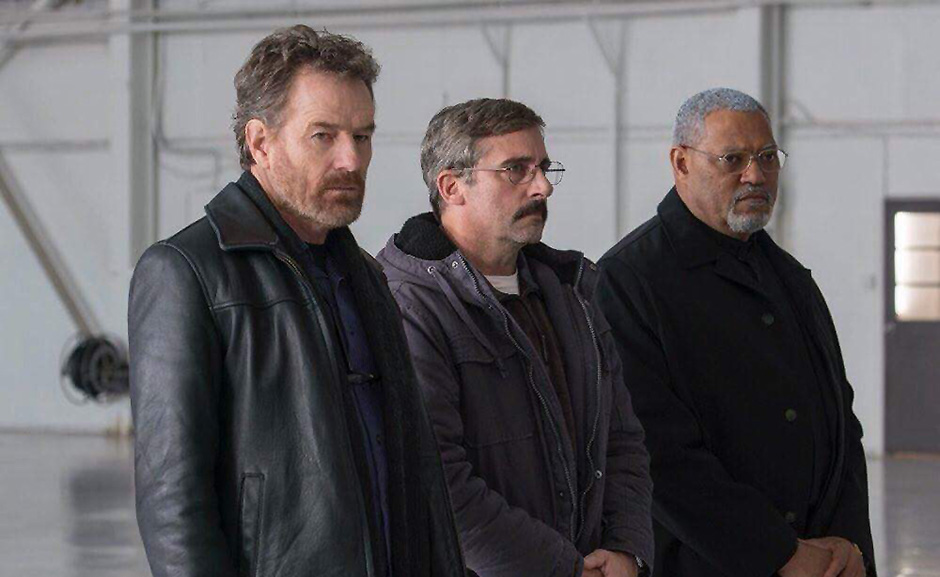 Sal’s bitterness about the lies and cover-ups during the Vietnam war (the subject of Spielberg’s The Post) extend to the Iraq war when, at Dover Air Force Base, a straight laced LtCol. Willits (Yul Vazquez) informs Doc that his son died a hero serving his country and should be buried in Arlington Memorial Cemetery. Through Larry Jr’s Iraq buddy, Charlie Washington (J. Quinton Johnson), Sal and Doc learn the real story and Sal believes that, much as it will hurt, Doc has a right to the truth.

But what is the truth of their own illicit experience, one that apparently left Doc with a blemished record and a stint in military prison? This is the truth that the former friends have to come to terms with as they decide to pay a visit to the mother of Jimmy Hightower, a boy who died without morphine. Can Sal’s crusade to pull the cobweb of lies away from his country’s disastrous foreign policy spare a fragile, lonely mother (a touching cameo from Cicely Tyson) who lost her son?

as a sequel to his novel, The Last Detail

, and so it is natural to assume that Linklater’s film is a sequel to Hal Ashby’s 1973 cult film. But aside from being a road movie in which one of three men is going to prison, the differences here are more striking than are the similarities.

If Linklater is critical of men in lofty positions who send boys to die in hopeless, foreign wars, the Last Flag Flying is not a black and white protest film. All of the men have a love-hate relationship with their wartime experience. They fully acknowledge that you were not fighting for their country, for democracy or for honour and glory, but for a buddy who had your back.

Docile, compliant, broken yet defiant, Doc decides to bury his son, not in Washington DC, but in New Hampshire, next to his mother. Linklater includes a shot of the New Hampshire licence plate with its moto: ‘Live Free or Die.’

So what leads Sal to drop his cynicism and resentment for the military and put on a uniform? Is it the scriptwriters’ sentimentality or a muddle of a characterisation? During a hilarious conversation about the absence of black singers named Richard, Sal tells Richard, ‘…I’ve never really identified in the white race.’ Richard laughs. ‘What race do you believe in?’ Sal answers, seriously for a change. ‘The Green.’ It’s the only race I understood.’

That unassuming conversation, one that is both funny and tragic, gets to the heart of the film.