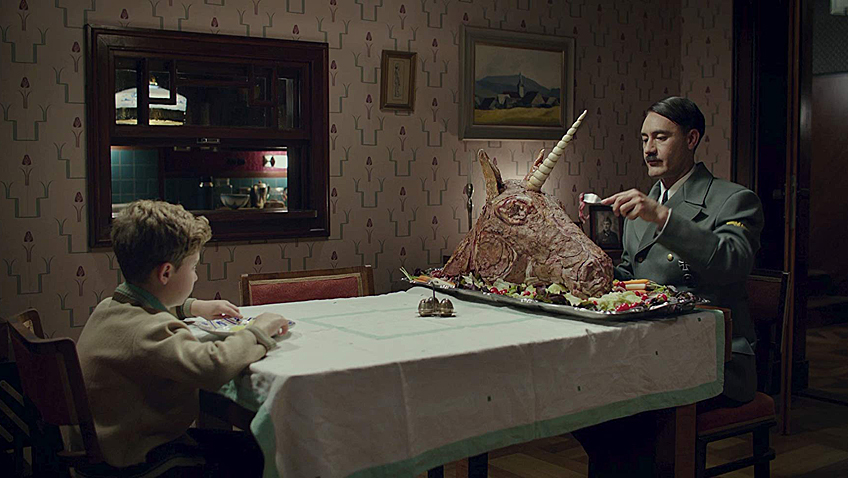 With Adolf Hitler as your imaginary friend, who needs enemies?

That one of the first films of the New Year is one of the most audacious and polarising, might not be a coincidence, particularly given its themes of populist rulers, brain-washing, propaganda, anti-Semitism and the understanding that comes from diversity, not from uniformity. Writer/director/actor Taika Waititi, best known for his charmingly off-beat 2016 Hunt for the Wilderpeople and his irreverent superhero movie, Thor: Ragnarok, combines charm and irreverence in an entertaining satirical black comedy about a lonely German boy at the end of WWII whose imaginary friend is a guy named Adolf (played by Waititi). Waititi is asking audiences to look hatred in the face and laugh at it as a form of exorcism. Some of the humour may be too on the nose, and a Jewish girl in the attic a bit contrived, but the concept works and the message, too timely to ignore.

With his father away, or dead, and his mother, Rosie (Scarlett Johansson), a busy official in the local Nazi party, ten-year-old Jojo Betzler (the amazing Roman Griffin Davis) is excited at the prospect of becoming a man. ‘It’s going to be intense,’ he tells himself in the mirror, as he inspects his uniform and prepares to join The Hitler Youth with his best (and only) friend; an overweight, be speckled kid named Yorki (Archie Yates).

After an enthusiastic locker-room-type motivation session with Adolf, topping one another with the Sieg Heil salute a buoyant Jojo leaps out the front door and skips down the street (past a queue of Jews) sticking his hand in the air as the Beatles Komm Gib Mir Deine Hand (I want to hold your hand) blasts into the cinema. Jojo’s dash to the training camp transforms into archival footage of huge military parades in which thousands of Germans extend their arms in the Sieg Heil salute as Hitler passes to ebullient Beatles’ tune.

When the army officer who runs the camp, Captain Klenzendorf (Sam Rockwell, Three Billboards Outside Ebbing, Missouri), tells the boys they will be learning how to blow things up, they cheer, although the girls are less vocal when Fraulein Rahm (Rebel Wilson) tells them they are going to learn to have babies for the Reich. But when it comes to strangling a rabbit to death, Jojo cannot do it. Accused of being a coward like his father, whom Jojo defends, saying he is fighting in Italy, he runs away to the jeers of his peers and instructors.

Waiting for Jojo in the woods is Adolf who comforts him. ‘The rabbit is no coward,’ he points out; ‘the humble bunny can outwit all of his enemies. Be the rabbit!’ Encouraged by these words, Jojo returns, galloping heroically into the grenade throwing exercise, where he is seriously injured and forced to recuperate at home. Limping, with a scar across his left cheek, Jojo is not the man he thought he was. 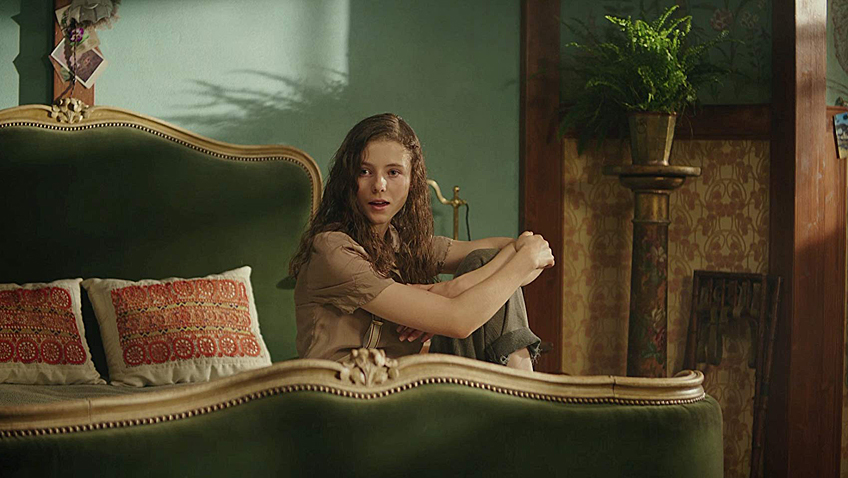 Wandering into his mother’s room one day, he is shocked to find a Jewish girl named Elsa (Thomasin McKenzie, Leave No Trace) hiding in a tiny room behind the wall. She has not broken in to kill them; Rosie is hiding her. Jojo’s world is turned upside down, particularly as Elsa has no horns and doesn’t smell like Brussel sprouts as he imagines.

Rosie’s loving relationship with her son is one of the marvels of the film with the theme of untied shoelaces and shoes playing a poignant and symbolic (we recall the piles of shoes, including baby shoes found in Auschwitz) role. They sing and dance together and Rosie teases him, but his discovery could turn a son into an enemy. Elsa refuses to believe a sweet young boy could be a Nazi. ‘You don’t know him, ‘Rosie warns her. ‘It took him three weeks to get over the fact his grandfather wasn’t blond!’ 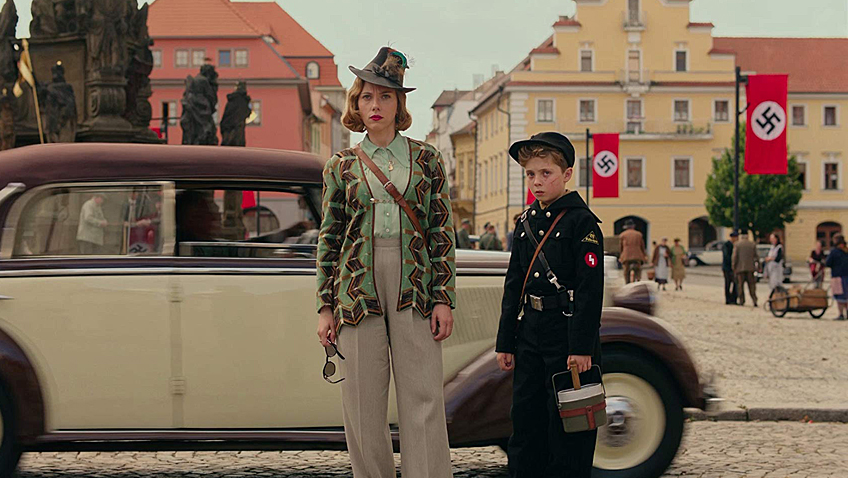 Jojo is even more concerned. If he betrays his mother, he will be an orphan, and if Elsa claims they both helped her, they will all be killed. But how can he fraternise with this dangerous enemy so close to Adolf?

Then he gets an idea from a chat with Captain Klenzendorf and Fraulein Rahm in which he mentions a hypothetical Jew. ‘I’m not sure I’d be able to tell one,’ he stammers, to which they reply, that’s the trouble. Someone should write a book.’ It’s a clever way of establishing their growing relationship. As Jojo interviews Elsa, she playfully presents the stereotypes only to subvert them. ‘Jews can read minds,’ Elsa states matter of factly. ‘But they cannot read German minds as they are too thick.’ As Jojo becomes increasingly jealous of Elsa’s elusive boyfriend, he is making illustrations and taking notes in a book that just might save their lives. 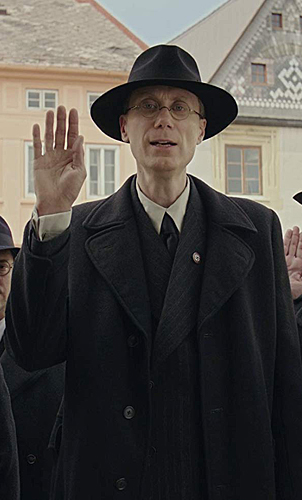 By telling his story through the eyes of an indoctrinated boy Waititi can then focus on opening that boy’s eyes to the obvious contradictions he discovers while questioning a live specimen who does not behave as he imagined. This is an obvious device to show how Jojo begins to think for himself, but it appears fresh and natural in the telling.

Waititi also uses the secondary characters for maximum effect. Hilarious Yorki illustrates, albeit with humour, how the German army were so desperate for cannon fodder they were conscripting boys (Yorki is 11 in full uniform with a rifle). If you haven’t observed the character of Captain Klenzendorf carefully, his self-sacrificial stance at the end might seem disingenuous, but he turns a blind eye to a discrepancy on a birth certificate, intervenes when a Gestapo agent (Stephen Merchant) searches Jojo’s house and is on intimate terms with his male assistant.

Though this is a comical allegory about the process of opening a closed mind, Jojo Rabbit

is also a coming-of-age story about how first love can be more powerful than the received wisdom of hate. But the humour never masks the dark side of the story; it helps Waititi appropriate it. Like the German post-war painter Anselm Kiefer who painted himself across Europe raising the Nazi salute as a way of confronting, rather than suppressing history, Waititi, who calls himself ‘a Polynesian Jew’, confronts the evil of the character he himself portrays. Passing by a row of Jewish resistance fighters or German sympathisers hanging in the public square, Jojo asks his mother, ‘what did they do?’ She answers solemnly, ‘what they could.’