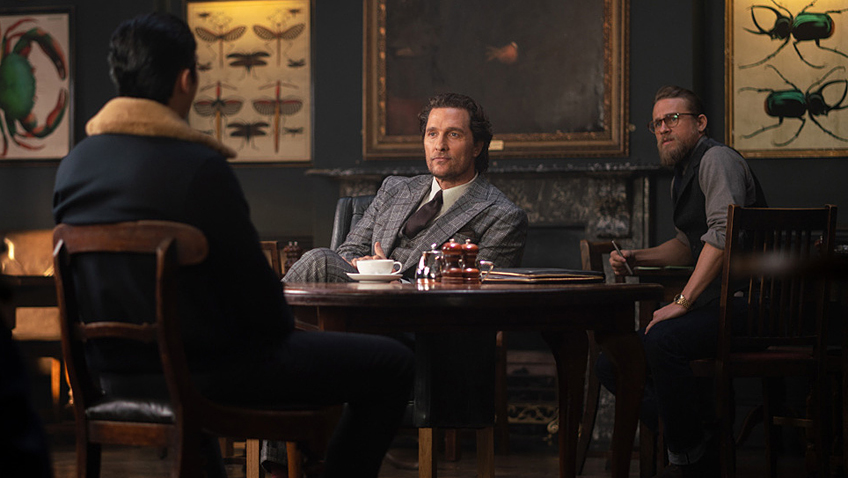 In 1998 Guy Ritchie burst onto the scene with Lock, Stock and Two Smoking Barrels, the cockney answer to Quentin Tarantino’s Reservoir Dogs (1992), each defining its brash, young respective filmmaker’s early, low budget, style and macho, lowlife gangster subject matter. Ritchie followed up his attention-grabbing debut with the more-of-the-same Snatch, while Tarantino gambled on a big departure from “Dogs” and delivered his masterpiece, Pulp Fiction. Both men’s careers since then have had their ups and downs, but it says a lot that in 2019 Tarantino gave us the terrific Once Upon a Time in Hollywood while Ritchie returns from directing Disney’s Aladdin with The Gentlemen, an artless, tasteless and soulless revival of his London gangster genre. 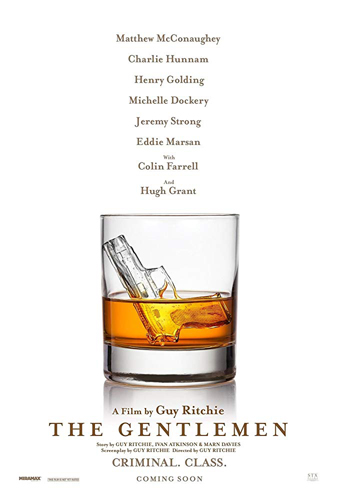 Both films are star-studded, but we’re here for The Gentlemen that, in the footsteps of Ocean’s 11, is aiming to get bums on seats with the coolest male cast the budget would buy. As if he could not return from Hollywood empty handed, Ritchie imports Matthew McConaughey as Mickey Pearson, a self-made multi-millionaire marijuana dealer. Perhaps this is a kind of in-joke about the trade talks with the USA that might exclude the NHS but not the drugs that have made Pearson rich and famous.

As though acknowledging the short attention span of his average audience, Ritchie’s first scene has the top billed McConaughey get a bullet through the head shortly after his character, Mickey Pearson, has ordered “a pint and a pickled egg” and shared a word of advice with the audience. “It’s not enough to act like the king; you must be the king. There must be no doubt, because doubt causes chaos.”

And chaos is what Ritchie is after. Pearson is sitting confidently in his local with his back to the door. He is calling his wife (Michelle Dockery) to arrange a date night, but something isn’t right on her end of the line which causes Pearson alarm. On Pearson’s end, it’s just as bad. We see a shadow with a gun approach him, we hear the shot and then cut to the egg and the glass on the table, shattered with blood. But a quick cut away creates that doubt, in this case about Pearson’s fate.

As well as this framing device, there is a story within a story that makes the plot seem hipper, cleverer and more substantial than it really is, which is self-reverential. For the story is narrated by a black-mailing journalist-and would be-script writer named Fletcher (Hugh Grant, bearded, with dark shades) and the story is a script that Fletcher is going to sell to a media company.

Fletcher has broken into the home of Pearson’s extremely able, but tired, right hand man, Raymond (Charlie Hunnam), who remains calm, if a tad unsettled at the nerve of this scumbag. Fletcher’s cockiness is the result of information which he deems worth £20 million. He not only knows more than he should about Pearson’s business, he knows more than Ray and Pearson do about Pearson’s business.

The yarn he spins is dramatised before our eyes, starting from an expository introduction to Pearson’s empire. While Pearson is a criminal who has made himself rich on ill-gotten gains (without paying tax) we know he is the good guy because he grows and sells marijuana which does not kill anyone. He also contributes to the British economy. Spotting a gap in the market, Pearson realised years ago that the English aristocracy were not only land rich and cash poor, but well connected and so unlikely to be raided. In exchange for a generous donation to the upkeep of a dozen stately homes Pearson established hidden marijuana farms on the land. 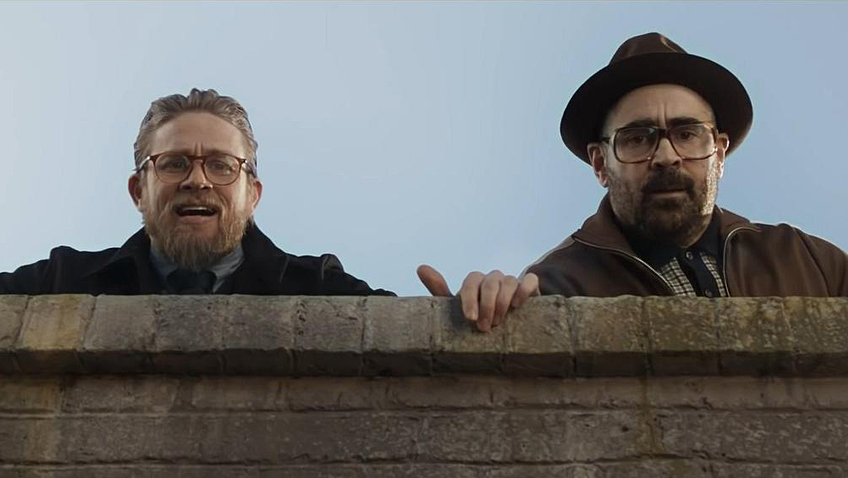 Colin Farrell and Charlie Hunnam in The Gentlemen

Now he is looking to cash-up by selling the going concern to another American, Cannabis Kingpin Mathew Berger (Jeremy Strong). Berger, however, has a secret plan to drive the price down before he concludes the deal. Much is made of the fact that Berger, who is a double-crossing, cheating, devious businessman, is a Jew, but lest Jewish audiences feel singled out, Fletcher has been spying on the real antagonist of the story, an Asian assassin named Dry Eye (Henry Golding). He also introduces us to Dry Eye’s suspected boss, Phuc (Jason Wong) who it’s okay to torture because he sells heroin and is less appealing than Pearson.

It’s also okay to make the upstart usurper Dry Eye a rapist as well as a murderer. Golding, who was the world’s most eligible bachelor in the cultural romcom Crazy Rich Asians, and the saintly guardian angel in the recent Last Christmas, outdoes Grant (whose romcom mannerisms Golding has down to pat) in terms of playing against type, both, here, with only minimal success.

The way Ritchie drags out a thin plot is to show us how one mistake in incident A leads to obstacle B further down the line. When Pearson is asked to do a member of the landed gentry a favour and rescue his drug addict daughter from an inner-city council flat, Raymond is reluctant but cannot refuse an order. Raymond explains that his expertise does not extend to inner-city low lifes, but he does his best.

The thugs with the girl are no match for Ray (who is so cool you never tire of watching him), but an unintended casualty is the son of a powerful Russian mafioso – just in case the Russians are feeling left out. And if you’re wondering what Pearson and Ray are going to do about the Russia mafia, Colin Farrell’s The Coach comes to the rescue, repaying a favour that keeps on being repaid. The Coach is legit, but his sports team has an unusual extracurricular activity that includes driving around in a van like an Irish SAS hit squad.

It’s hard to take Edie Marsan’s character seriously when he plays a Murdoch type media mogul chasing an incendiary front page. Although he is involved in dirty business, he confronts thugs on the street with no bodyguards or assistants.

After insulting every contingent he could squeeze into a movie with tired stereotypes, this shaggy dog story comes to an end. It is not boring, as the talented actors give it their all and look like they had more fun making it than we have watching it. But it’s not Once Upon a Time in London, either: it’s more like watching the realisation of the dog-eared script that Fletcher is peddling around.