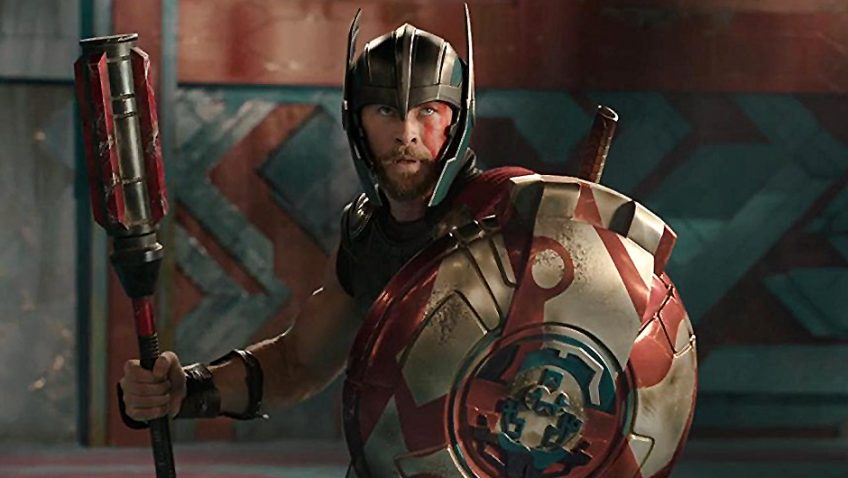 . Then again, maybe he could, for the 94-year-old Lee, the former editor-in-chief, publisher, and chairman of Marvel Comics, has a cameo in Thor: Ragnarok

and is one of its Executive Producers. Lee has been in the loop for all the permutations of his 54-year-old creation, including Kenneth Branagh’s 2011 Thor and Alan Taylor’s 2013 Thor: The Dark World. But credit for a sequel that sends up its ridiculous predecessors must go to producer Kevin Feige, who produced them all.

In the production notes, Feige explains that everyone, including, Marvel and The Walt Disney Company, which purchased Marvel in 2009, wanted, “to really push the envelope…experiment and take it to another level’ – and thank the Norse gods, they have. Mercifully, the writing duo Chris Markus and Stephen McFeely of the leaden Thor: Dark World has been replaced by Eric Pearson and Craig Kyle (Christopher Yost remains) and the director is also gone.

’s $180 budget, Feige has put his money on New Zealand director Taika David Waititi – who had never worked with a budget of more than $2.6. He also gambled on the first female villain in Marvel Comic history, and on staging a new battle of the sexes with both Chris Hemsworth (Thor) and Cate Blanchett (Hela), hailing from Victoria, Australia. Feige also wagered that Hemsworth, who showed us he was a talented dramatic actor in Rush and a comic actor in Ghostbusters, could switch between the two on a dime for over two hours.

The gambles have paid off, although, let’s face it, despite his good looks and muscles, Thor is pretty weak superhero. With its tongue-in-cheek, operatic script and references to biblical stories, Thor: Ragnarok

is a more grown-up super-hero film that tries to distinguish itself from the noisy video-games passing as blockbusters that we are subjected to year after year. Although any Marvel comic-based film is compelled to contain winks, nods and references to previous Thor and Avengers films, neophytes can enjoy Thor: Ragnarok

But it is Waititi who is the ultimate superhero here. He, too, had to stretch himself in a big way without losing himself in a corporate franchise. His best films, Boy, (a popular New Zealand coming of age story); What we do in the Shadows (a mock documentary in which he co-stars), and Hunt for the Wilderpeople (a troubled orphan and a grump, old man become targets of a manhunt) were low-budget, unpretentious cult hits that made money – just not in the billion dollar ball park.

First, the title. Opera lovers will recognise it from the final opera in Richard Wagner’s Ring Cycle: Götterdämmerung, which is a German translation of Ragnarok. Norse mythology prophesises a war by fire among beings and gods that ultimately results in the destruction of the gods, the universe’s immersion in water (think global warming); and ultimately, its renewal or resurrection.

Second, the link to the last Thor: The Dark World. As Thor (Hemsworth) departs Asgard to wander on earth (a favourite habit of Wagner’s god, Wotan), he says goodbye to his father, Odin (Anthony Hopkins). Or does he? We have cause to suspect that Odin’s duplicitous adopted son Loki (Tom Hiddleston) has transformed himself into Odin and now sits on his throne. Loki has such a bitter feeling of entitlement and giant chip on his shoulder that it seems that this sibling rivalry will spark the beginning of the end of Asgard (and none too soon you might be thinking). Blanchett is an Academy Award winning actress but there’s not a lot she can do with a one-dimensional role other than to work out with Hemsworth’s personal trainer while awaiting her dramatic entrances. In a battle that sees Thor and Loki banished from Asgard, Hela smashes Thor’s precious hammer, leaving him not only stunned, but in an existential crisis. Can he be a god without Mjölnir?

The hammer is not the only thing Thor loses in this instalment. Thor finds himself a captive on the planet of Sakaar, ensnared by Odin’s former Valkyrie (Tessa Thompson, Creed, Selma) with a digital tag implanted in his skin that regulates his movement and controls his power. This Valkyrie is now working for the hedonistic and sadistic, Grand Master (Jeff Goldblum, hamming it up, but without the comic character’s blue skin). The Grand Master has Thor’s hair cut in preparation for a gladiatorial fight with Sakaar’s resident champion – and former Avenger, the Hulk (Mark Ruffalo). If this all sounds a bit like The Hunger Games, the Grand Master is just a more open version of President Snow and the ‘games’ a lot cruder.

The act of cutting off Thor’s long, golden locks should signal the fate of Sampson, but both Thor and the Hulk (who united for a cause in the Avengers: Age of Ultron) have a tricky reunion in the ring and back in the locker room. Just as Dr Jekyll is ultimately taken over by Hyde, Bruce Banner has been all but consumed by the Hulk, in continual combat mode for the past two years. Thor now has to find his pal Bruce.

Who will win the battle? Will Loki and Valkyrie find their inner moral core? How will Thor get back to Asgard, and will he be in time to save it? A lot of people care about these things, so it would be a spoiler to say more.

One of the problems with the Thor franchise is that while Asgard is supposed to represent ‘home sweet home’, it is one of the least prepossessing places imaginable. In an epiphany, Thor finally realises that Asgard is nothing if not its people. Have you noticed, though, that the ‘people’ look like the illiterate, helpless, unwashed, malnourished peasants who inhabit the villages in films like Snow White and the Huntsman? During the big, climactic evacuation sequence, all of them file into a single space craft – like Noah’s Ark, but without the animals.