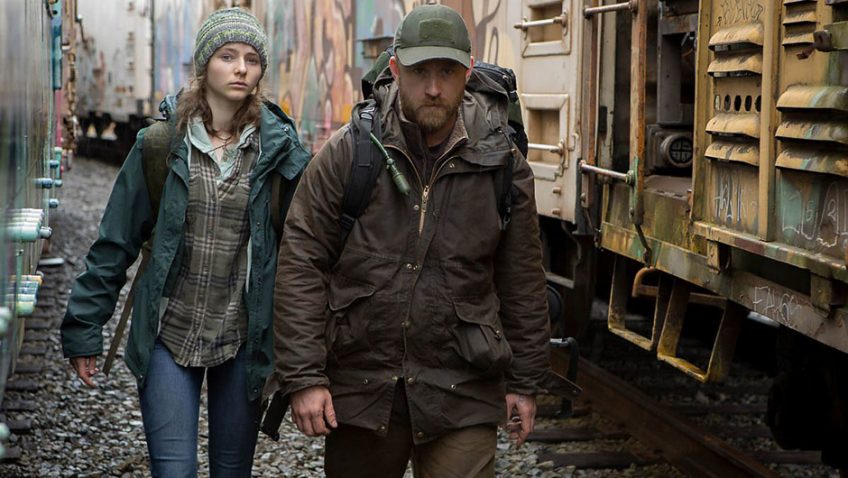 appears modest by comparison, but it has a slow burning power that makes it one of the best films of the year. And Granik can be credited for discovering Thomasin McKenzie who plays the film’s young heroine.

revisits the themes of self-sufficiency of those living on the fringes of society in America’s backwoods poverty and benefits from Winter’s Bone cinematographer Michael McDonough who so thoroughly immerses us in the woodland life that when we accompany Will (Ben Foster) and Tom (Thomasin McKenzie) into the hub of Portland, we feel a culture shock. The film also sees a daughter detaching herself from her father’s past and coming of age, but it is has none of Winter’s Bone’s self-conscious pretence. Some viewers might dismiss Leave No Trace

as too low key and one-dimensional, but to do so would be to overlook the power of understatement and a viewer’s unprompted sense of discovery.

Widowed war veteran, Will (Foster) and his teenage daughter, Tom (McKenzie) live below the radar in their camouflaged campsite in a Portland Oregon national park, which Tom, a surprisingly mature 13, considers home. They share a tent, but there is no suggestion of impropriety. Will loves his daughter. What we debate in our minds is whether Will is aware that he is putting his own needs over hers.

Like the father in Matt Ross’s more light-hearted film, Captain Fantastic, Will has an uncompromising need for control. Tom learns to survive in nature – how to build fires in the damp woods, collect rainwater; how to hunt and gather, and how to live with hunger. And, as we discover in one of the only unconvincing moments in the film, Tom is being home schooled by her father to a higher-than-average standard (as are the children in Captain Fantastic).

They strike a curious pair when they go into the city to stock up on provisions after Will sells his PTSD medication for cash. The grocery store shopping is a joint enterprise where together they question every purchase but allow themselves a treat.

was not inspired by films like Captain Fantastic (which also takes place in the Pacific Northwest) or French director Cedric Kahn’s Wild Life (based on a true story), but by Peter Rock’s novel (My Abandonment)

, based on the true story of a veteran and his 12-year-old daughter living in Portland’s Forest Park. This political angle remains in the background and is all the more poignant for not emerging from that position. 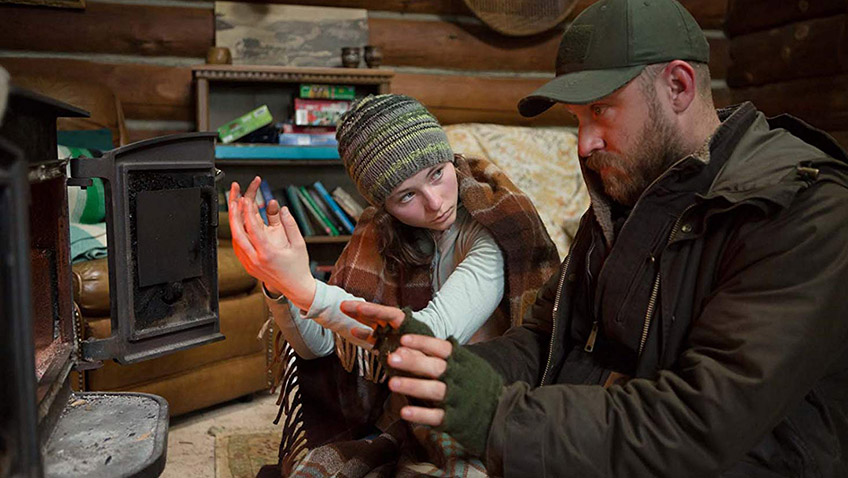 Ben Foster and Thomasin McKenzie in Leave No Trace

It is not only PTSD that causes Tom to fear being arrested by the authorities, but what we perceive as a pathological inability to feel comfortable in a sheltered community. Like writer/director Kelly Reichardt (Certain Women, Wendy and Lucy), Granik wants the story to tell itself, unhampered by a back story related in expository scenes or by intrusive narration.

Granik does give us an early clue about what drive’s Will when we see him drilling Tom in how to leave quickly and to leave no trace. In what looks like a game of hide and seek, Tom hides in the thick green undergrowth. ‘Your socks burned you,’ Will states as he ‘tags’ his daughter, in a tone suggesting that there is no winner.

When Tom’s second error in judgment leads to their eviction, she embarks on a journey of self-discovery.

Clichés evaporate and the Social Services employees depicted are not the unfeeling, tunnel-visioned bureaucrats of Ken Loach’s I, Daniel Blake. Satisfied that there is no child abuse, a sympathetic social worker (Dana Millican) naturally sees fit to house the father-daughter in a pleasant enough rural house where they can have privacy and neighbours. Tom thrives. She goes to school, has real showers, cooks meals in a proper kitchen, and meets a boy who seems the perfect friend for this lonely girl. But Will feels hemmed in and is miserable. It’s time they are on the move.

Anyone who saw Kill Your Darlings, The Program or Hell or High Water will know that Ben Foster is an intense actor who conveys a sense of both menace authority and a masochistic self-discipline without trying. Casting the unknown, ordinary-looking McKenzie next to him is superb casting, as she literally remains in his shadows until he wakes her up that morning in their new bungalow and tells her to pack her things. ‘I like it here,’ she says, not in defiance, but in recognition of a young woman’s awareness that she is not her father.

A lesson from a silver-haired beekeeper at the couple’s next stop is the metaphor the film needs and, like the ‘Volta’ in a sonnet, signals the climactic shift in the course of the film.