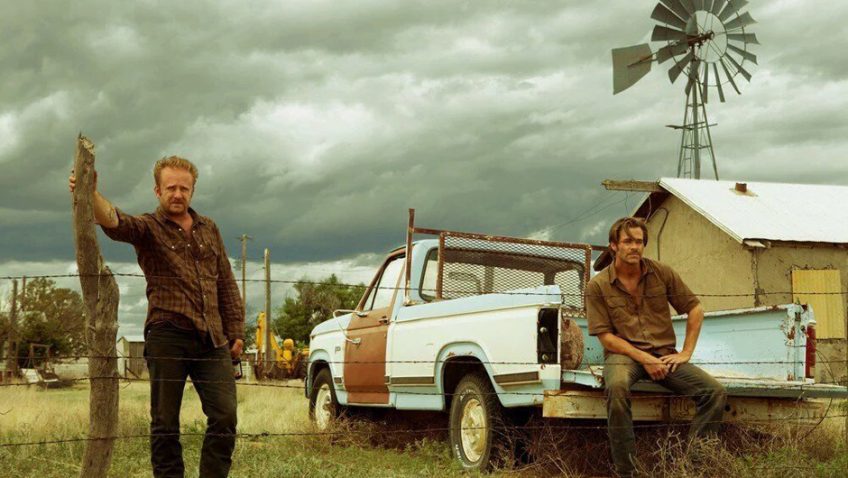 If the US western is not dead it is because the genre is as flexible as it is cherished. Armed with an Academy Award-worthy script by Taylor Sheridan (Sicario), Glasgow-based Director David Mackenzie (Starred Up, Hallam Foe) heads west (to New Mexico in fact) for Hell or High Water

, a compelling, character-based tragic-comedy set against the Texan ghost towns of the economic crisis.

The film opens with the robbery of a branch of Texas Midland Bank, reminiscent of those of Bonnie and Clyde only here the two masked bandits are not quite working in tandem. Toby (Chris Pine, Star Trek) and his brother Tanner (Ben Foster, 3:10 to Yuma) are two losers who have only known poverty. Their closeness, however, belies very different personalities.

Soft spoken, divorced father Toby is contemplative, low-key and sensitive. His clean record, handsome features and bedroom blue eyes make him more attractive to women than to the Texas Rangers searching for the robbers. A working girl in a casino might come away empty handed, but a sweet waitress at a coffee shop who stops to chat with Toby is handed a tip large enough to pay her monthly rent. Tanner is a borderline sociopath, an ex-con who seems unwilling to learn a lesson.

The loving, brotherly banter and Toby’s determination to leave a legacy for his two estranged children make these two bank robbers sympathetic to the viewer and cast a romantic aura around their multi-dimensional characters. When oil is found on Toby’s derelict ranch, he masterminds a string of casino laundered, ‘cash drawer’ bank robberies to prevent the bank foreclosing on their mortgage.

Tanner executes Toby’s plan with aplomb, if too much enthusiasm. Like a child playing a game, Tanner is enjoying the robberies far more than the cautious Toby for whom they are a one-off means to an end. If Toby wants to minimise the collateral damage, however, he is working with the wrong partner.

In addition to Tanner’s loose trigger-finger, the only obstacle in their path is old-school Sheriff (Jeff Bridges) Marcus, a dogged and shrewd detective: deep-throated, wide at the waist and fighting his imminent retirement. But if his mind works faster than his body, he is still a formidable foe and up to the challenge. Marcus matches wits with Toby in the vein of Agent Eastwood vs. Assassin Malkovich in In the Line of Fire, but with a balance of humour and wit.

Mirroring the Toby/Tanner relationship, Marcus masks a real affection for his steadfast Deputy, Alberto (Gil Birmingham), who puts up with Marcus’ insomnia and racist Comanche jokes. When Marcus chides Alberto, ‘Indians aren’t supposed to feel sorry for cowboys,’ he is referring to Alberto’s genuine concerns about his boss’s health. Alberto half-heartedly puts his boss in his place with a few mild ageist gibes. Handing Marcus the initial report on the robbery, he tells him, ‘you’re gonna’ have some fun before they send you off to the rocking chair.’ In fairness to Marcus, he’s an equal opportunity jokester and the Mexican Midland Band manager is not spared a Mexican slur.

Jeff Bridges and Gil Birmingham in Hell or High Water

If these friendly gibes tell us something about the characters, they serve another purpose. Hell or High Water

is a story that mixes genres, but is, at heart, a story about land. It has more in common with the superb 99 Homes, a film about the 2008 Florida housing crash; or There Will be Blood, a destructive feud about oil-rich land, than to the heist movie, Ant-Man. Like these two movies, Hell or High Water

is centred on a moral dilemma draws in the audience, forcing us to consider all sides.

While Hell or High Water

begins with oil on land under threat of foreclosure, it expands through the characters and dialogue to become a film about the changing face of the USA. Sitting at the otherwise deserted T-Bone restaurant (which employs the scariest waitress west of the Hudson) in a dust-bowl town that has known better days, Marcus and Alberto reflect on how, 150 years earlier, all this belonged to Alberto’s ancestors. Then it was taken by the white settlers and US Cavalry, only now to be taken by ‘these bastards there’, as they stare at the bank.

Foster, who was brilliant as William Burroughs in Kill Your Darlings and as the disgraced Tour de France champion Lance Armstrong in The Program is a great character actors, but the real revelation is Chris Pine. Pine leaves Star Trek’s Captain Kirk far behind as he conveys pain, regrets and a web of conflicting emotions in his face and body language. This isn’t the first time the great Jeff Bridges has played a sheriff (think back to 2010’s True Grit, and 8 Million Ways to Die), but here, the badge does not look like a prop.

’s moral palette is more grey than black and white as the long-awaited show down between Toby and Marcus makes clear. In this epilogue we can think back to an exchange between the brothers early on in the film when a nervous Toby accuses his brother of talking ‘like we’re not going to get away with it.’ Tanner replies, ‘No one gets away with anything.’