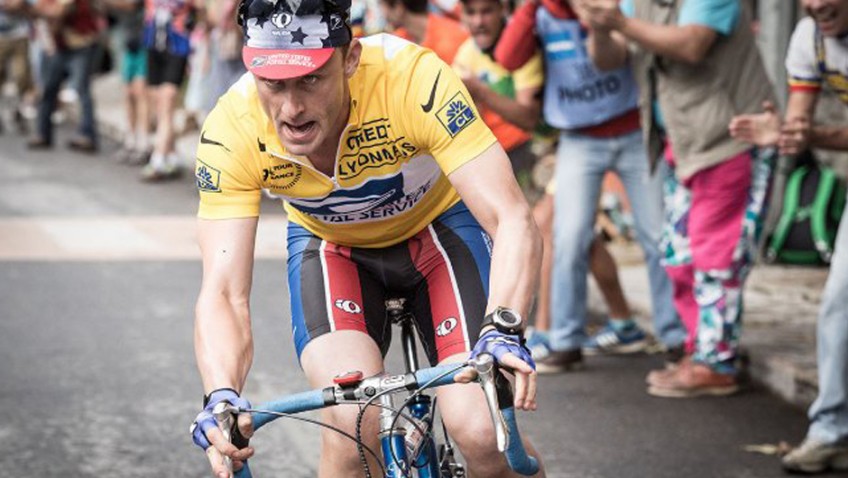 Ben Foster gives a brilliant performance as Lance Armstrong, in The Program

Who would have thought that Stephen Frears, 74, the revered British Director known for his British themed films, including Philomena, The Queen, Mrs Henderson Presents, Dirty Pretty Things and My Beautiful Laundrette would be interested in an American cyclist and drug cheat?  The Program

refers to cyclist Lance Armstrong’s infamous drug enhancement program.  Armstrong did make his name on the Tour de France, a country in which two of Frears’s period films, Chéri and Dangerous Liaisons, were set, but modern American sports?

and the filmmakers’ decision to make the film about both Walsh (Chris O’Dowd) and Armstrong (Ben Foster). The result is an awkwardly divided film that captures the essence and drive of neither man while failing to ask the key questions about what the L’Equipe newspaper called The Armstrong Lie.  Nor are there any facts or revelations that were not covered in more depth by Alex Gibney’s 2014 documentary, The Armstrong Lie that starred Armstrong himself.

One justification for making a feature of a book or documentary is the ability to dramatise the subject matter, making it more accessible to a wider audience.  But with the exception of the actual doping ritual and some behind the scenes shots of David Walsh struggling to be heard in the din of Armstrong mania and law suits, there is a curious absence of dramatisation in the film that is not present in the documentary.

In John Hodge’s (Trainspotting, Shallow Grave) script, the key episodes of Armstrong’s career (beginning with his confession on the Oprah show) get a few minutes each and are hurried through as one hurries through a wedding reception queue in order to reach the Bride and Groom.  Speaking of marriage, Armstrong’s courtship and marriage gets two minutes, and then we never hear about Armstrong’s wife again, and never learn about the pressure on his family of his public humiliation and loss of revenue.  His hospitalisation for cancer receives a little more time, but despite the importance of this event in his life, its function appears to be the opportunity to dramatise the moment when friend Betsy Andreu (Elaine Cassidy) and fellow Post Office Team cyclist Frankie Andreu (Edward Hogg) overhear Armstrong tell a doctor that he takes performance enhancing drugs. 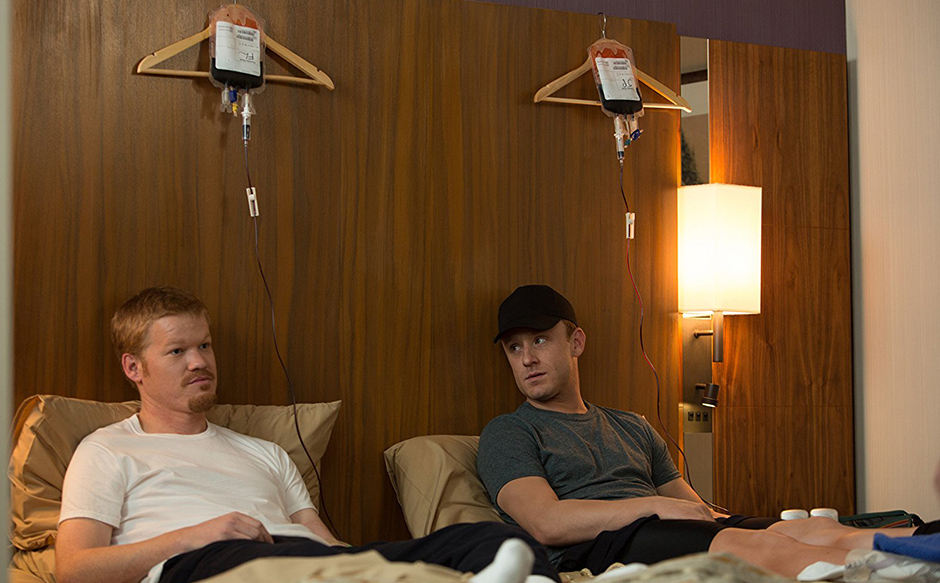 Ben Foster and Jesse Plemons in The Program

Both were keen to testify against Armstrong.  Less keen was Quaker Floyd Landis, who was pressured into doping by Armstrong, as was the rest of the team. Jesse Piemons’ portrayal of Landis is so sensitive and heart-felt that his guilt and frustration are palpable.  We can almost hear the cries of his conscience being torn apart.

There is also a touching scene in which the busy Armstrong, who raised millions for cancer research and treatment through his charity, interrupts his schedule to spend time with a young cancer patient.  This scene is crucial to showing us another side of the arrogant, defensive competitor, but it, too, feels dutifully slotted into a biopic that covers all the bases, but superficially.

And then there is Chris O’Dowd, struggling for his place in the film just as he struggled to convince his bosses, insurance companies and various sports bodies, of his evidence against Armstrong.  The real Walsh must have worked a lot harder than his counterpart in the film who seems to be waiting it out in sports’ pubs until Armstrong’s confession makes his life easier.  Right up to the end, we are never quite sure whether the filmmakers are making the story of a persistent sports’ journalist’s triumphant vindication, or the story of a driven sportsman’s amazing rise and disgraceful fall.

Whereas Alex Gibney’s documentary asks the question what made Armstrong, who managed to retire with all his laurels, risk everything to come out of retirement and race again, The Program

expresses this concern through a couple of lines of dialogue.   And while we watch the team dope up and then quickly ‘bleed’ themselves to avoid detection, little thought is given to notion that if all the teams in the Tour de France dope in a similar manner (Armstrong was not the first to use the services of Dr Michele Ferrari (Guillaume Canet), then Armstrong might well have a claim to being the best athlete.  The drugs enhance the athlete’s breathing capacity but can someone who is not a great cyclist win the grueling Tour seven times just with the help of EPO?