Home / LIFESTYLE / REVIEWS > / FILM REVIEWS / Not Reichardt’s best, but certain women are born to be filmmakers 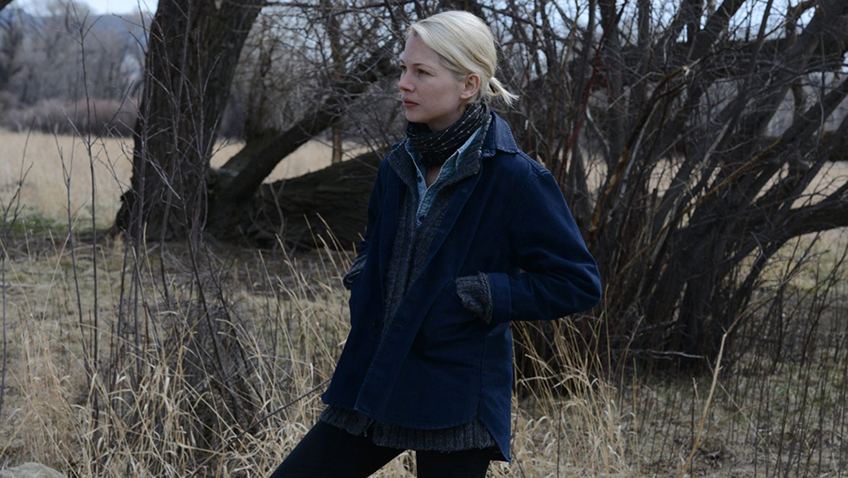 Not Reichardt’s best, but certain women are born to be filmmakers

There are only a handful of female American directors whose films are consistently worth seeing, but even fewer who have a recognisable style that is consistently compelling despite breaking many commercial ‘rules’.  Modern American films are not supposed to feature strong female leads or silent passages, lingering shots and subtlety. Nor are they supposed to put the natural world and physical space at the centre of a film or conjure tension out of apparent inaction. Kelly Reichardt does all this and something more as she seems to be questioning the reality of manifest destiny. Although her films never come across as political, her characters have a way of finding themselves at the centre of a situation that is often an allegorical reflection on disenfranchised America.

is not Reichardt’s first foray into welding a feature film from short stories, but it is the first of her five films that has not been written by Jon Raymond (who adapted his short stories for the screenplays that became Old Joy and Wendy and Lucy.)  Certain Women

is based on three short stories by Maile Meloy that connect ever so slightly.  The most obvious thread, aside from three independent women, is the Montana homestead to which they are tied.  In Reichardt’s previous films the protagonists have been travelling through nature (Old Joy); homeless; (Wendy and Lucy); pioneers travelling the Northwest passage (Meeks Cutoff; and activists in temporary lodging and on the run (Night Moves).

The film opens with a great beam of light and the mournful sound of a train emerging from the darkness into a vast valley. But it is not the kind of train that anyone is rushing to meet or that will be waiting to carry anyone off.

Middle-aged lawyer Laura Wells’ (Laura Dern) afternoon tryst with a married man (James LeGros) is about as romantic as her subsequent involvement in a hostage crisis is heroic.  Nothing in Wells’ small-town Montana life seems fulfilling where, with a mix of empathy and conscientiousness she deals with Fuller (Jared Harris), a needy, but increasingly stubborn and dangerous personal-injury client who refuses to take her advice.

Well-dressed and groomed Gina Lewis (Reichardt’s muse Michelle Williams) is determined to build a country house from authentic materials, in this, the slightest and most cryptic of the three stories.  When she comes across a pile of indigenous sandstone that belongs to septuagenarian Albert (René Auberjonois), Gina and her husband Ryan (whom we recognise as Laura’s lover) pay Albert a visit. Their teenage daughter (Sara Rodier), who can’t stand her mother, is uninterested.  Elated with the guilty pleasure of having obtained the stones so easily (Albert was not even interested in money), Gina collects them, but Albert, staring through the window, does not acknowledge her greeting.

In the third and strongest segment Reichardt’s magic casts its spell.  A stocky, plain- looking rancher (Lily Gladstone) feeds horses in a barn through which we perceive the snow capped mountains and wintery landscape surrounding the isolated ranch. 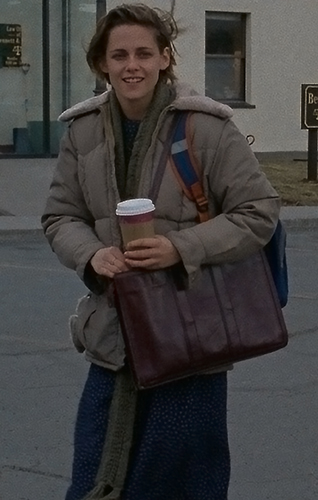 One night, on a whim, she enters an adult education class in the surrealistically arcane subject of school law.  The enervated, novice teacher, Beth Travis, (Kristen Stewart) does not ask to see the rancher, Jamie’s registration. Amazingly, the three or four students return for week two.  Jamie, returns, too, but not for the law.  She is infatuated by the thin, frazzled, pretty teacher and, after showing her to a local diner, remains.  Beth orders a lot of food that she barely touches, while Jamie, orders nothing, listening intently  as Beth complains about the gruelling four hour drive home.  She needs this part-time job as she does not make enough at the law firm where she works to repay her law school debts.

Up to this point the two women have remained in Beth’s world.  After the third class  Jamie brings a bit of her world to the town and invites Beth to the diner on her horse.  Beth awkwardly hanging onto Jamie, who is now in control, is a strong visual image, while the sound and rhythm of the horse hooves on the concrete remains complements the idea of conflicting worlds.  But when Jamie learns from replacement teacher that Beth will not be returning, she impulsively, makes the long drive, trying to track down Beth through the city’s law firms (including Laura’s).

In this achingly moving segment, shot primarily at dawn or at night in grainy 16mm film by Reichardt’s cinematographer Christopher Blauvelt, we are held in a spell of inexplicable tension that seems so fragile, it could snap at any moment.  Discomfort, disappointment, isolation, an austere beauty, exhaustion and physical distances that take on a metaphorical dimension, provide a sensory landscape in which two strangers from two different worlds come into contact and then retreat.

Is Gina building the perfect Montana house in hope of patching up her ailing marriage and her damaged relationship with her daughter; or to feel that she belongs? Or perhaps she is building this homestead in defiance.  Laura may have ended her dead-end affair, but when we last see her, her relationship with Fuller drags on as she visits him in prison.  Beth, defeated by the distances under Montana’s big sky (it is not called the Big Sky state for nothing) may continue in her law firm to become another Laura, while Jamie returns to her routine where there is no rejection or disappointment, only longing and memory.

These are the women selected as the nouns of the title, but what about that ambiguous adjective, ‘certain’? Is it a ‘some’ as in ‘some women do this or some women are like that?  Or are the women ‘confident’ and ‘very sure’ of something. ‘Certain women’ is a dependent clause no matter how you interpret the adjective and Reichardt leaves it to the viewer to complete the sentence – and her stories. Or not.