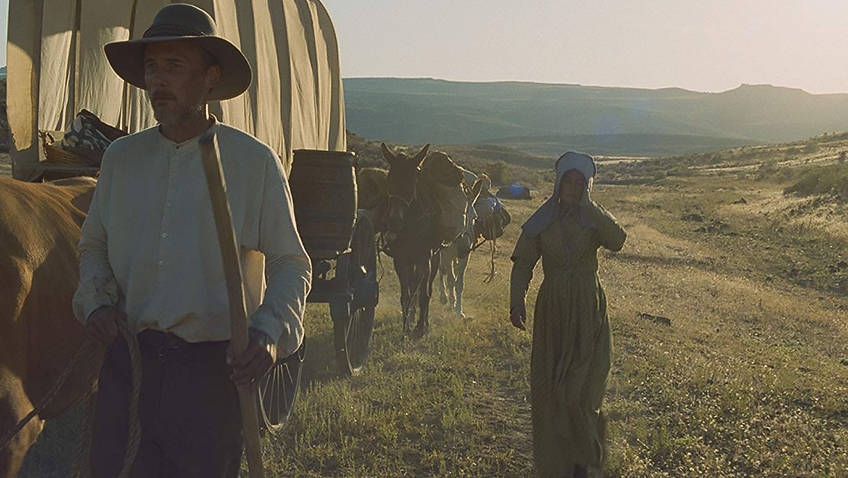 Writer/director Kelly Reichardt’s last film, Wendy and Lucy, was a beautifully observed and tender story of a down-and-out young woman (Michelle Williams) whose car has broken down on her way to Alaska where she had hoped to find summer work. Frustrated at being stuck in a small Oregon town, she and her loyal dog wait for the repair that may never happen.

, another story about a peripatetic young woman, this time travelling with her husband Solomon (Will Patton) and two other couples, stalled on the Oregon trail in search of a better life. But while Wendy and Lucy, a unique spin on the 20th century American road movie, was a small gem, Meek’s Cutoff

, an allegorical Western and 19th century road movie, is a masterpiece.

It is 1845, and a small wagon train comprised of the Tetherows and two bible reading couples (Zoe Kazan, Paul Dano, Shirley Henderson and Neal Huff), have hired Stephen Meek (Bruce Greenwood) to guide them on the Oregon Trail. After a long period of silent observation, we overhear part of the first conversation in the film.

A couple is whispering in the early evening darkness. It seems they are becoming increasingly concerned about Meek’s credentials and navigating skills. As the frightened group trudge ahead into the desert becoming dangerously short of food and water, they summon up the courage to confront him about their whereabouts.

When Meek attempts to kill a lone Native American (Rod Rondeaux) whom he had captured along the way, Emily and Solomon object, arguing that he is their only hope of finding water. As an uneasy relationship, born of fear, hope and curiosity grows between Emily and the captive, conflict arises between Emily and Meek over the Indian’s fate. Solomon, Emily’s second husband, reluctantly gives her his support and is probably as impressed with his new wife as is the audience. 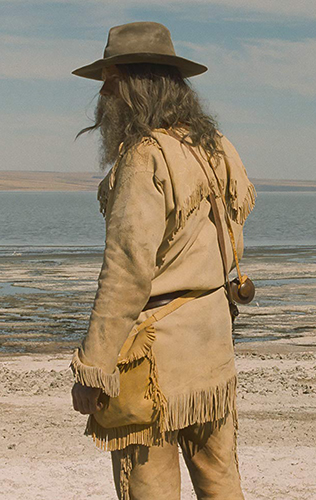 It is apparent that Meek is not only a racist but a misogynist and his ongoing conflict with Emily is one of the joys of the film. The other pioneers, frightened by Meek’s stories of Indian savagery, become convinced that he is leading them into an ambush. The Tetherows, however, gamble that he is leading them to water. Our thirst for the answer keeps us glued to the screen and our personal views will colour the brilliantly ambiguous ending.

In reality, Stephen Meek was a fur trapper and explorer in the Rocky Mountains who also made his living as a wagon train guide in Oregon. In one ill-fated expedition in 1845 he led a splinter group that wanted to avoid the Blue Mountains where, rumour had it, dangerous Cayuse Indians were on the war path. Many wagons were destroyed during the steep, rocky area near the Malheur River and many pioneers died of illness and thirst in the Oregon High Desert.

Reichardt’s adaptation of this little-known historic event is one of the marvels of the film. She does include a scene where a wagon is damaged but reduces the number of wagons from 200 to 3 and is not interested in the historic particulars. Reichardt focuses instead on the battle of wills between Emily, the new frontier woman, and Meek, who she turns into a villain. She also develops, with heavy irony, the theme of trust so necessary on the Oregon Trail. The pioneers’ blind trust in God and Meek have got them to a place where only their willingness to trust a desperate Indian can save them.

Both Wendy and Lucy and Meek’s Cutoff

were written by Jonathan Raymond and Reichardt who prefers to let the visuals do the talking. They build tension with a slow-burning, measured pace that some audiences might find off-putting, but which pays huge dividends. If Wendy and Lucy is relentlessly claustrophobic by its small town setting, Meek’s Cutoff

, shot by Christopher Blauvelt in the same square, Academy ratio, rather than in widescreen, becomes so, despite the shots of big sky sunsets and expanses of sage brush. The claustrophobia here stems from the small mindedness of the other pioneers and the arrogant and bigoted Meek; from the limited vision of human beings against the intimidating expanse of the unforgiving desert.