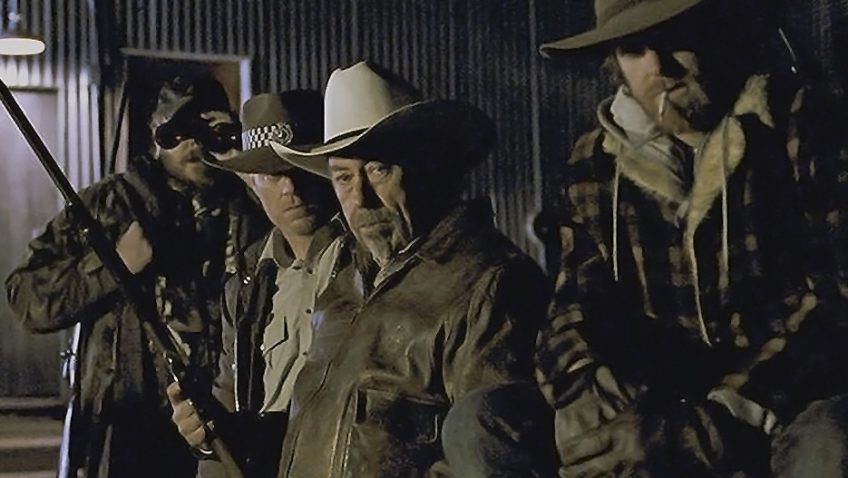 This modern day Australian Western is a labour of love: written, produced, directed and edited by one man who waited years to make his first film, Patrick Hughes. Unlike too many auteur films that desperately cry out for an objective eye and additional talent, Red Hill

is an absorbing, well-acted suspense movie, even if its debt to the Coen Brothers’ No Country for Old Men is overstated. Otherwise, Hughes’ low budget indie only falters at the very end with a series of explanatory flashbacks that disrupt the flow of the action.

Shane Cooper’s (Ryan Kwanten) first day of work as a policeman for the small, and largely deserted, town of Red Hill doesn’t start well. With all the unpacked boxes in his new house, he can’t find his gun and his tyrannical, controlling boss, Big Bill (Steve Bisley) isn’t the patient or welcoming type.

Shane tells the suspicious Bill that he’s relocated from the city because his pregnant wife, Alice (Claire Van Der Boom), already miscarried at six months and the doctor prescribed a quieter, less stressful life for her second pregnancy. We’re probably meant to believe this explanation, but it’s odd that the couple made the strenuous move when Alice was already (from the looks of her) seven months pregnant.

In any event, Shane’s explanation is full of dramatic irony for he soon discovers there’s a wild panther and a convicted murderer on the loose and both are on a killing spree. Jimmy Conway (Tom E. Lewis) has escaped from jail and Cooper’s colleagues know that he’ll be seeking revenge on those who put him there. What transpires at Red Hill that day, while Cooper’s wife naps in ignorant bliss, is more harrowing than anything he encountered as a city cop. Ryan Kwanten (primarily known through American and Australian television drama) might not be the most charismatic actor, but he’s completely believable as the courageous and well-trained policeman, isolated and in over his head, but determined to keep his moral compass. Bisley is equally good, gradually revealing the truth behind the façade of the respected town leader and head of police.

When the police force discovers that Conway has escaped from prison, Bill takes charge with a firm-handed professionalism that makes us re-evaluate his harsh treatment of Shane. Now it seems like no more than his way of imposing discipline on his men. The relationship between Shane, his fellow officers and the town folk (all men), is well handled and convincing as is the subtle way in which Shane realises that there’s more to the Conway story than meets the eye. Hughes’s intelligent script ensures that we know no more about Conway and the town than Shane does and that we discover everything through is eyes.

Although the similarities between this film and No Country for Old Men are obvious, Hughes cleverly turns the disfigured killer, a representative of Australia’s persecuted indigenous community, into a more interesting character. But he then overdoes it by using melodramatic flashbacks to explain and show more than we need to see. Since we can’t feel anything emotionally from the flashbacks, they have the effect of turning Conway’s horrific past into a cliché.

The film is set in the breathtaking scenery of Australia’s high country without a beach, barrier reef or Alice Rock in sight. Tim Hudson’s cinematography is impressive, particularly as this appears to be his debut feature, too. Considering the large number of night shoots and the violent shoot outs, both Hughes and Hudson get the most out of their clearly minimal budget.