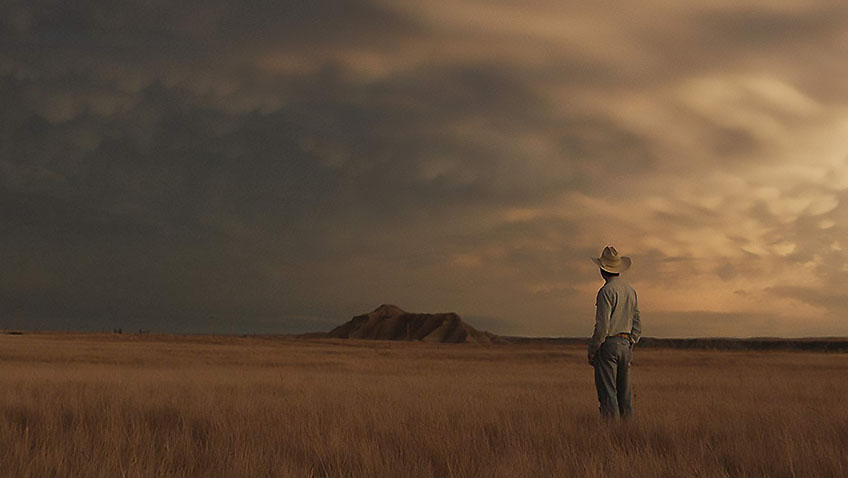 There are some films that are hard to shake off. They keep surfacing in your thoughts long after you leave the cinema. Burnt by the Sun, Brokeback Mountain, Moonlight and last year’s Call Me by Your Name are some examples of films that win you over with their humanity, beauty and poetry. The Rider, written and directed by Beijing-born, California based filmmaker Chloé Zhao, is one of those movies, despite its low budget, lack of plot and completely unknown, first time actors. In fact, all the actors are real people in the world of Brady Jandreau (Brady Blackburn in the film) a South Dakota rodeo rider who had to give up his vocation, his identity and his way of life to find a new dream – that may lie in acting. 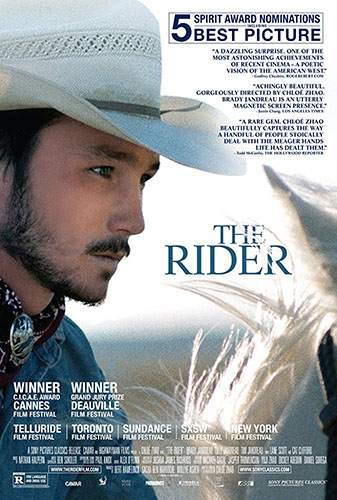 The film opens with striking close-up images of a horse. A hoof, a mane and wide brown eyes emerge from the dark. The wind howls and the horse snorts, dragging its hoof in the dust. A young man with delicate features and a half shaven head wakes up in a stark bedroom, startled, as if escaping from a nightmare. The connection between the young man, Brady Blackburn (Brady Jandreau) and the horse is established there in that first series of dialogue-free images, but there’s another link.

When Brady gets up the first thing he does is feel the metal staples (sutures were not strong enough for an inch deep gash) running along the right hand side of his head. He undoes the still bleeding bandage and wraps his head in cellophane while taking a shower. It is a horse that was responsible for this life-changing injury.

Nonetheless, the second thing Brady does is walk out to talk to his favourite horse, Gus, who is soon to be sold to finance, according to Brady, his father Wayne’s (Tim Jandreau) drinking and reckless life style. The two love one another but have a trying relationship, each afraid of seeing themselves in the other.

We soon meet Wayne who pulls up at the ranch in his truck and accuses his son of stubbornness in leaving the hospital. We also meet Brady’s younger sister, Lilly, a mentally-challenged fifteen-year-old who refuses to wear a bra. Brady is protective of Lilly, who lacks a mother’s touch and they are very close. In the film Lilly is being brought up in a man’s world as their mother is dead (The Jandreau’s are divorced).

In a lovely scene that feels improvised, Brady and his rodeo mates build a fire on the prairie, drink beer and talk. We learn that the bucking bronco Brady was riding in a rodeo threw him and stepped on his head. The injury affected three regions of his skull and caused significant brain bleeding. He had a seizure and was put in an induced coma. This is a simplified version of what happened, and, amazingly, the accident occurred four months before Zhao began filming. 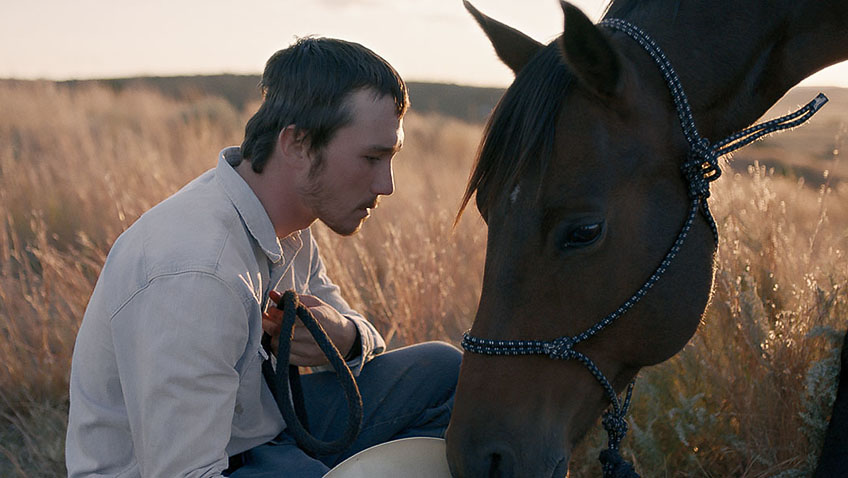 Brady Jandreau in The Rider

Zhao had met the family before as the filmmaker had been living on the Pine Ridge Native American reservation where she had made her debut feature, Songs My Brothers Taught Me. After that experience, she found it difficult to readjust to NYC, where she had been living and returned to South Dakota. The film with Brady was going to take a different route when the accident occurred and Zhao realised she had found the film she wanted to make. How does a cowboy who can’t ride readjust, let alone find the will to live?

Brady, who never graduated from high school, has to find a way to earn some money while healing sufficiently to return to training, if not to rodeo riding. In the film he takes a humiliating job at a supermarket where a fan requests a selfie with Brady.

About 60% of the film is true. Brady never worked in a supermarket and continued to earn a living training horses during the filming process. He would train until 1 PM and then play a version of himself in front of the camera, for a pretty gruelling day. What comes across that is very true is Brady’s obsession with riding.

He and his friends watch videos of their rodeos and Brady plays and replays the moment when his life changed forever in the ring. Unable to follow his doctor’s orders, Brady returns to training – and hence, to riding. He sees a beautiful, but wild, horse called Apollo that belongs to a neighbour and wants to buy him, but is broke.

Brady Jandreau in The Rider

Brady is surprised to learn that his father had bought him the horse, probably at a discount as no one could ride him. Brady can. One of the joys of the film is watching Brady training horses with his horse whisperer technique.

In other hands this could easily have been a saccharine biopic about a man and his horse or a hospital drama. But the combination of the sensitive, charismatic Brady, the gorgeous cinematography and Zhao’s poetic, unhurried and unsentimental documentary-fiction style turn The Rider into an elegy to dreams cut short.

We hear about Lane Scott (who plays himself) before we see him, for Lane was a champion bull and horse rider (a notch up from Brady it seems) of almost mythical status. Brady drives across the border to Nebraska to visit Lane in a rehab facility and it is a shock to see the very young rodeo legend, reduced to a paraplegic in a wheel chair who speaks to Brady by spelling out words with one hand.

It is a shame that we are left to assume that Lane was hurt in a rodeo fall like Brady. In fact, he was the victim of an avoidable car accident with a group of other young people, most of who had been drinking. There is an irony to this – a boy who rides bulls is undone by a friend driving recklessly – and there is an important warning.

There is irony, too, in the connection between the macho rodeo culture and Brady himself, who is far from tall, of slight build, and comes across as wistful and caring. There is no talk of a girl friend. He showers affection on his sister and on horses.

Horses and men are linked again toward the end of the film when Brady finds Apollo has wounded his leg on a barbed wire fence. ‘Any animal that was hurt like I was would be put down,’ he reflects, as though feeling guilty that no one would finish the job for him. ‘God gives us each a purpose. For a horse it is to run across the prairie and for a cowboy, it’s to ride.’