Home / LIFESTYLE / REVIEWS > / FILM REVIEWS / Springsteen is still The Boss, but his directorial debut is less persuasive than the music 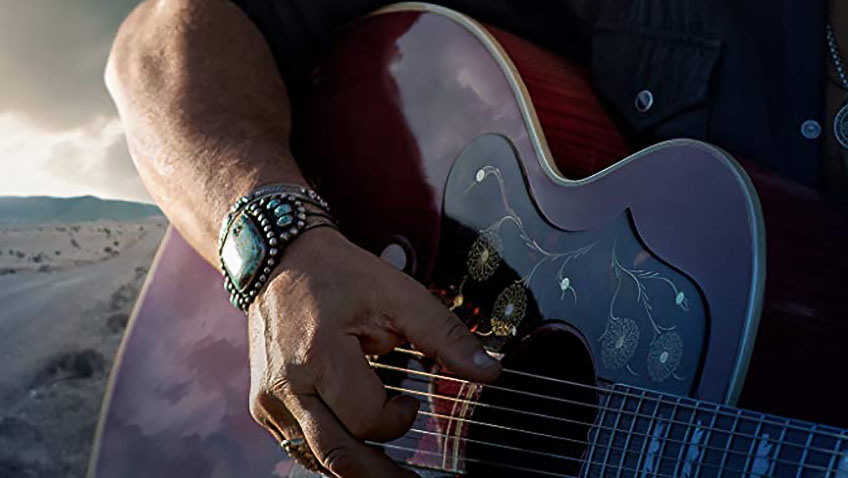 Springsteen is still The Boss, but his directorial debut is less persuasive than the music

Bruce Springsteen’s first studio album in five years is probably good enough for him to remain The Boss, despite this eponymous, self-indulgent, prolonged advertisement for the album, Western Stars

. The setting for Western Stars

(the movie) is a renovated barn on his ranch in New Jersey, one of three homes which the multi-millionaire shares with his wife of 30 years, (and onstage co-singer, guitarist) Patti Scialfa, their three children who are now grown, and their horses. He’s no longer the Rhinestone cowboy – the song that wraps the film – but the diamond ranch owner. With a few exceptions, these are lovely songs, beautifully sung, but the character-driven stories and homespun philosophies that separate the songs are far removed from his opulent surroundings and, given the lyrics, redundant. If the myth of Springsteen is best left inchoate in our hungry teenage imaginations, the struggles through his life are already reflected in the songs.

This is a concert film, and on stage with Springsteen and his red C & W acoustic guitar are Scialfa, with her guitar; backup singers; Springsteen’s band, and a large orchestra of younger looking musicians. For this album features sweeping orchestral arrangements that Springsteen wrote with co-director, editor and co-producer Thom Zimny. The orchestration is beautiful, and most of the songs are, too.

Springsteen begins by telling us about the venue for this filmed concert – an 18th century barn conversion. ‘We’ve had barn dances and weddings here’ he tells us, and we half expect him to direct us to a website where we can book our next family event. The barn, with a bar running down the left side and tables and chairs where the concert audience is seated (although we never really see them) is like an alternative set for the big finale in Michael Curtiz’s film, White Christmas.

Springsteen’s narration is illustrated by still and video images, old and new, a recurring motif being a car driving through an arid western landscape on a modern, empty road. The first song, Hitch Hikin’ fits right in. Springsteen is aware of the myth, although his early albums are also motorcycles. ‘This is my 19th album and I’m still writing about cars,’ he reminds us, while he supposes that they are a metaphor for ‘freedom and the open road.’ While it’s safe to say Springsteen spent more time in concert venues, recording studios and on world tours with his entourage than driving solo on the open road, he sings the melancholy, The Wayfayer, with its fabulous beat, followed by Tucson Train with its uplifting orchestration.

The beautiful, metaphorical Wild Horses, sung like a confession, refers to Springsteen leaving friends behind without saying goodbye, and to his bad temper.

Guess it was somethin’ I shouldn’t have done,
Guess I regret it now,
Ever since I was a kid,
Tryin’ to keep my temper down is like,
Chasin’ wild horses…

Springsteen was a rebel and a loner as a kid, but was he ever a lonesome cowboy in California? He followed his parents there when he was in his early 20s and moved there again with his future wife, Scialfa, in the early 1990s. They left California to raise their young children in New Jersey away from the public eye. Two of the character-driven songs sound like they were written, not about Springsteen, but about the two protagonists in Quentin Tarantino’s recent film, Once Upon a Time in Hollywood. That wonderful film is about the relationship between a has-been television cowboy who has not adapted with the times, and his sidekick, a famous stuntman shunned by Hollywood over rumours that he killed his wife. The last two lines of Drive Fast (Stuntman) are: I got two pins in my ankle and a busted collarbone/A steel rod in my leg, but it walks me home.

But most of the songs are about regret, loneliness and loss, and these, while Springsteen stops short of getting specific must, you suspect, be about his relationship with Scialfa. He asked her to join the E Street Band for his tour of the hugely successful Born in the USA in 1984. While as you’d expect, the tour brought the two musicians together, there was something wrong. And that’s probably where the songs of guilt come from. In 1985, after a short romance, he married an actress/model named Julianne Phillips and Scialfa left the E Street Band.

Perhaps that’s the origin of the rousing ballad or lament, There’s Goes My Miracle:

Here goes my miracle,
Walking away, walking away.

There is no doubt from watching Scialfa and Springsteen together today that she was his miracle. At the end of the song Springsteen repeats the line: Look what you’ve done some ten times, as though he cannot believe how he screwed up. Springsteen owns up to being the cause of this split, although he is feeling the pain.

And the short and unhappy marriage to Phillips, which ended in divorce in 1988, is reflected in the 1987 album, Tunnel of Love

. Perhaps it was looking back on his mistake in letting Scialfa go that was the prompt for Sundown:

I’m twenty-five hundred miles from where I wanna be,
It feels like a hundred years since you’ve been near to me,
I guess what goes around, baby, comes around,
Just wishing you were here with me, in Sundown.

In 1988, though Scialfa was starting her own solo career, Springsteen persuaded Scialfa to re-join his Tunnel of Love Express Tour, telling her it would be quick. And this time, there was no doubt that they had fallen in love.

The first and last verses of the song Stones are explicit, and interestingly, Springsteen and Scialfa sing this as a duet:

So, a lot of soul searching and soul bearing, but different from earlier lyrics, and the pervasive orchestration also marks a shift. This isn’t Springsteen’s best album, but it’s a treat to hear him perform the album in this film. It would have been even better live, on a stage.