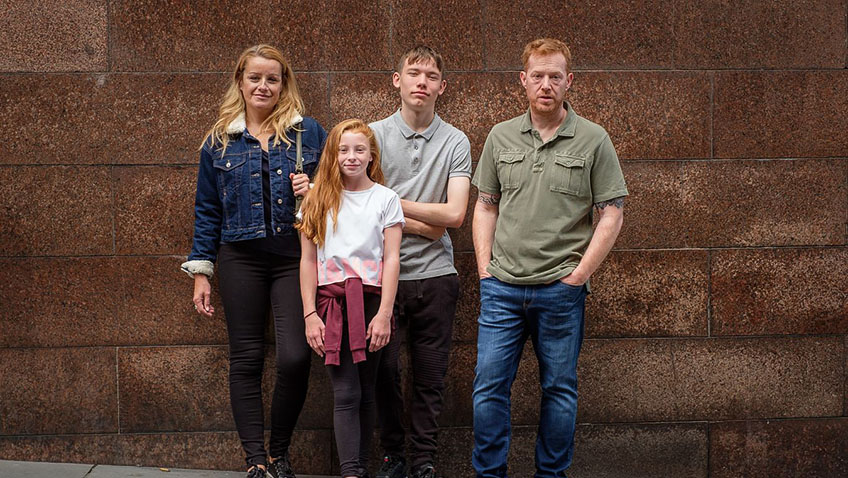 Thirty-three years after being forced to retire from Oxford at 65, scientist John Goodenough, who went to work at the University of Texas, won the Nobel Prize, age 97. Fortunately, after the success of I, Daniel Blake in 2016, a film about unemployment and the Kafkaesque welfare system, Loach did not have to retire or want to: what he learned in his research for I, Daniel Blake made him angry enough to want to send another clear message to the country. He might not win the Nobel Prize, but Sorry I Missed You is arguably 83-year-old Loach’s best film yet. 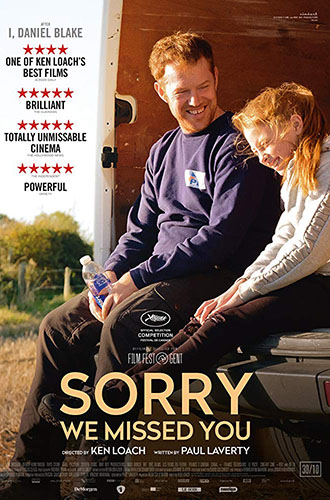 The nightmare of Daniel Blake’s unemployment looms over the world of those precariously employed in the gig economy in a film that makes no effort to mask its political message. Again, set in Newcastle-upon-Tyne, a loving family is torn apart when 40ish former builder Ricky (Kris Hitchen), in the hope of buying a house, becomes a ‘self-employed,’ parcel delivery driver, leaving his wife Abby (Debbie Honeywood), a home carer, without a car.

Right away the filmmakers are quick to inform us that Ricky lost his relatively well-paid and steady job as a result of the financial crash (greedy capitalist City boys in collusion with banks, and under the blind eye of regulators, etc) that took its toll on the construction industry. Loach wants to give faces and consequences to the headlines about the collapse of Northern Rock in 2007, too.

When the bank collapsed, so did their mortgage, and Abbey’s dream of having a family home that is really their own. So, when Ricky comes home buoyant after a job interview with a franchised parcel delivery company, he can only see the potential and the bright side. He will be his own boss and will not be slowed down by others.

Ricky feels like he has a bond with the tyrannical franchise owner, Maloney (Ross Brewster) who asks him if he’s ever been on the dole. ‘No’, Ricky proudly answers, ‘I’d rather starve.’ This is the kind of man who won’t expect holidays, sick pay or days off for doctors’ appointments. ‘You’re a trooper’, Maloney replies, satisfied he has found a man who won’t cause him problems like another driver we see explode with pent-up frustration and lose his lucrative route.

But almost immediately we, if not the wilfully blinkered Ricky, see the compromises and obstacles ahead. When a fellow driver explains the importance of a bottle to Ricky, he begins to understand that his real boss is an automatic tracking device that Maloney hails as the core of his business. There is no time for urinating when a customer can track the driver every minute and know exactly what time he should be at the door, regardless of traffic, parking, roadworks, need to eat, or buy petrol. 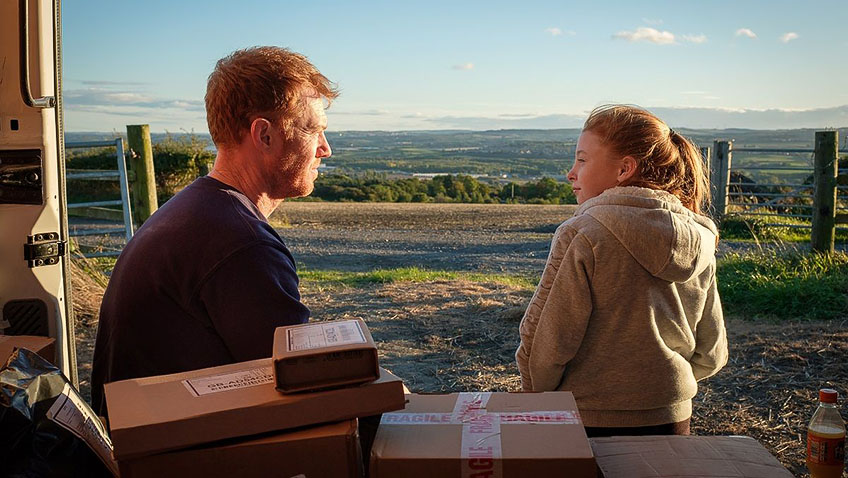 Katie Proctor and Kris Hitchen in Sorry We Missed You

Then there is the matter of the van. Ricky considers renting a van from the company, but a fellow driver points out that that eats up £65 a day, every day, and he is still responsible for insurance.

That night, he persuades a reluctant Abbey that it’s a short-term sacrifice for a long-term gain. In two years, they will have saved enough for a mortgage. Now Abbey is forced to go on her rounds by bus, spending so much time in transit that she ends up telephoning messages to their children, instead of being there for them.

Over the course of the film we observe the Catch 22 effect of two stressed out parents working long hours and falling asleep in front of the TV that they used to enjoy with their family.

The talented graffiti artist Seb (Rhys Stone) is getting into trouble at secondary school and going off the rails, forcing his parents to lose money by taking time off work to show up at the school. Seb’s super-bright kid sister Lisa Jane (Katie Proctor, an amazing discovery), the family peacemaker, is unable to sleep due to anxiety. It is hard to invite school friends home, too in these circumstances, and these are the years when learning to socialise and having friends is so critical.

Loach gives us all a break on a special, bright, sunny day when Ricky takes Lisa Jane, a redhead like her dad, with him on his rounds. He loves her company and assistance, and she is thoroughly enjoying the experience, not to mention the rare quality time with her father. Although Ricky is self-employed and the van is his own property, Maloney tells him that a passenger is against company rules.

We spend time with the kind and compassionate Abbey, too, who cares for the disabled, the bedridden, and a woman with Dementia. Unlike Abbey, Ricky has a hot-temper and he cannot show restraint when Seb pushes his buttons.

As tensions escalate at home, so they do at work, and Ricky realises that even putting his schedule over his children, his health (he is afraid of taking time off to go to the hospital) and his marriage will not be enough. When the van is broken into and items stolen, Ricky has to pay what the insurance does not cover.

It might be nit-picking, but in the last quarter hour or so the film loses a bit of its overall intensity, while Abbey’s saintly perfection as carer, mother and wife is too conspicuous. You don’t have to be perfect to be done in by the gig economy. And you might want some reference made to Seb’s artwork. That no one is trying to channel his talent into something more constructive could be cultural, or it could be another consequence of his preoccupied parents’ fatigue, but the matter never comes up.

According to the TUC, the gig economy employs 4.7 million workers, and while many claim zero-contract hour jobs suit them, Loach sees its spread as a duplicitous and sinister capitalistic ploy to exploit the working class at the expense of the fat cats. These people are propping up the employment figures, while lacking any security and shopping from food banks. You might think you don’t need to see this film, particularly if you share my dim view on films masquerading as polemics. But everyone should see Sorry I Missed You, because it’s a timely, well-made, satisfying and thought-provoking film.