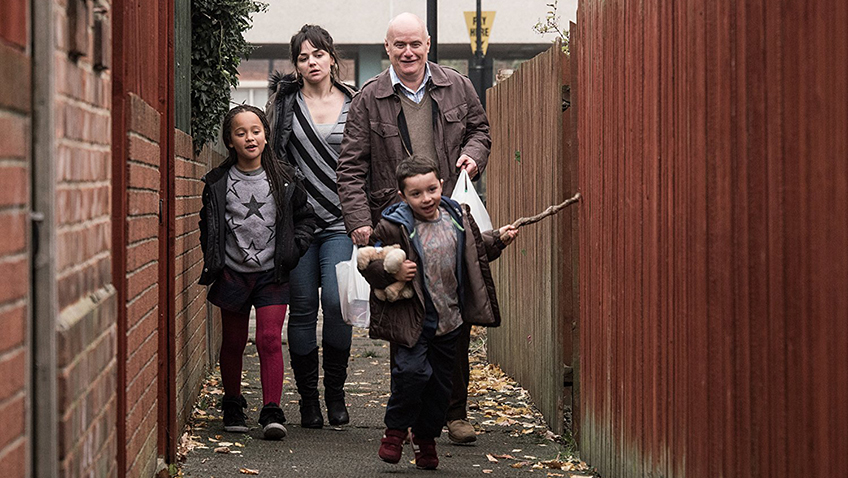 The appeal of Ken Loach’s I, Daniel Blake

– which won the Palme D’Or at the Cannes Film Festival – is clearly not restricted to the victims of the Kafkaesque bureaucracy that is the UK’s welfare system. It’s doubtful that any of the jury members have been on the dole here or have fed their kids from a food bank. But everyone can empathise with a story about two good people who are stripped of their dignity by a counterproductive, soul-destroying system.

Nearly 50 years after his breakthrough drama Cathy Come Home gripped viewers with its gritty depiction of the dysfunctional welfare system, Loach, now 80, is not in the mood to beat around the bush. Written by Loach’s scriptwriter for the past twenty years, Paul Laverty, I, Daniel Blake

is unapologetically polemic, self-righteous, one-dimensional and didactic. But there’s no denying that it is also a gripping, cathartic experience that might, as The Big Issue postulates, have the power to change the system.

is, in a sense, an Everyman’s Odyssey. Newcastle upon Tyne resident Daniel (comedian Dave Johns, terrific), a 59-year-old, skilled carpenter, led an honest, uneventful, tax-paying life, but has recently been to the wars. While working, he cared for his wife who was dying of cancer, and after burying her, had a heart attack.

Warned by his doctor that he cannot work, his return to his solitary council flat is a bewildering, bumpy ride through the welfare system where obstacles that Homer could hardly imagine are designed to wear down the applicant rather than get him back on his feet.

The hero’s first battle takes place over the titles in an off-screen conversation with the robotic, disembodied voice of a health-care worker and is so absurd, he chuckle. Daniel falls short of being given disability allowance by three points and learns that his only option is to apply for job seekers’ allowance.

Laverty is determined to push his normally calm and patient Everyman to the breaking point. We have the interminable wait on the phone and the requirement that he apply on-line. ‘I’m a carpenter; I’ve never been anywhere near a computer,’ he pleads to deaf ears. Ann, a rare sympathetic middle-aged employee (Kate Rutter) is publically reproached by her supervisor for helping Daniel. Students lend a hand on the library computer, but Daniel is frozen out of the time-limited programme.

Fortunately, a helpful neighbour is on hand to help, but the next step, the Job Centre interview is pure theatre of the absurd. Daniel: “I’ve been told by my doctor that I am not supposed to work” and he has the medical evidence. Job Centre: I’m afraid that you must continue to look for work or your job seekers’ allowance will be frozen.’ 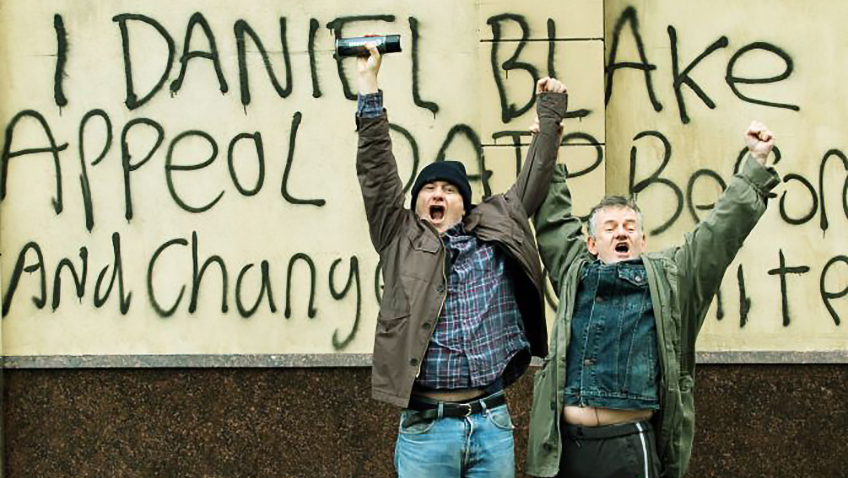 Dave Johns and Malcolm Shields in I, Daniel Blake

While swallowing a full set of pills to keep himself ticking, he reads the letter that he is not eligible for employment support. He is told cannot appeal until he receives a call from ‘The Decision Maker’ and he heads back to the queues.

There, he observes a young mother with two children being told to return the following day as she was late for her appointment. She explains to deaf ears that she just arrived from London to be re-housed in Newcastle and did not know the city. When Daniel intervenes, and a man offers her his place in the queue, they are both kicked out. This is the start of Daniel’s friendship with Katie (an excellent Hayley Squires).

Since Daniel is childless, and not yet homeless, Katie’s absorbing story is there to shed light on another facet of the system. Katie was evicted from her flat in London for filing what was a legitimate complaint against her landlord. In order to be re-housed she had to move to Newcastle. ‘The kids had to be taken from the school they loved,’ she adds, just to hammer home that children need stability.

Luckily for Katie, Daniel is handy with the DIY in her new flat and he enjoys child-minding. To thank him, Katie invites him to dinner in what is starting to resemble a family unit.

A devastating scene at a food-bank where a starving Katie breaks down in front of her children is uncomfortable viewing, but the film totters on the edge of Dickensian melodrama when Katie takes up prostitution to feed her children and pay the rent.

Meanwhile, Daniel awaits that elusive call from the Appeal’s adviser (a bit like waiting for Godot). There is the obligatory CV Workshop, where, bemused, he learns that many companies now require video CVs and applications via Smart Phone) and the job-search. When he comes across a rare employer who is interested (‘You got a lot of experience; To be honest, I’m sick of the young ‘uns,’), Daniel has to turn down the offer as his doctor insists he cannot work.

Daniel gives up, a broken man. ‘When you lose your self-respect, you’re done for,’ he tells an adviser before going outside and spraying the life affirming I, Daniel Blake

on the job centre wall (for which he is arrested).

Loach is probably well aware that he is going to annoy a lot of people, including those, who, like the civil servants in the DWP assume that anyone dependent on the welfare state is a dim-witted skiver. While this crowd might not be the film’s target audience, you have to wonder how many Katies and Daniels can afford to hear their own anti-austerity rallying cry.