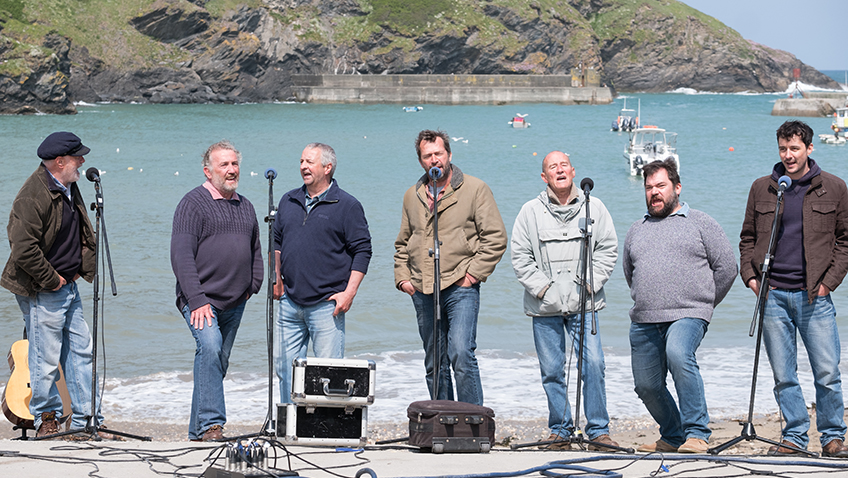 Since 1995, a group of (mostly) fishermen have gathered on the harbour of the picturesque town of Port Isaac, Cornwall, to sing sea shanties for charity. Hearing these traditional songs in the salty air blending with the sounds of the sea, sung by the strong and not displeasing voices of ten hearty seafaring men has a nostalgic appeal, as if they were hymns to camaraderie and a more connected way of life that is fast disappearing. In 2010 these singers were ‘discovered’ by an independent record producer, Danny Brown (played by Daniel Mays) who recorded enough songs for a demo album in the town’s church. Island Records signed the group to (a reportedly) million dollar deal. The album, Keep Hauling

, is available on 15 March when the film is released.

The writer/producer team Meg Leonard and Nick Moorcroft saw the Fisherman’s Friends perform live on This Morning, contacted the group’s manager and optioned the film rights. And who could blame them, as this sweet and genuine story has the makings of a feel-good film that with some directorial skills and imagination and good writing, could have been a British comedy, if not in a league with The Full Monty, then at least an antidote to all the British gang and families-on-welfare movies.

Some of these qualities remain, and the film is a pleasant enough diversion. But four decisions were made that have sucked the warmth, laughs and authenticity out of the film and replaced these qualities with something formulaic and contrived.

The first is the producers’ decision to appoint themselves scriptwriters. This is the duo behind Finding Your Feet, a film that wasted the talents of half a dozen of Britain’s best actors over 50 in a series of improbable, predictable and hackneyed situations using every cliché in the book. Moorcroft co-wrote 2010’s Burke & Hare which the show business magazine Variety called an ‘amiable, creaky comedy.’ 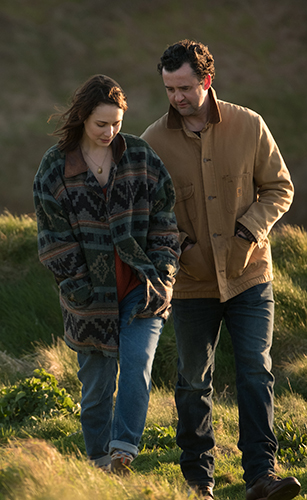 That is what Moorcroft and Leonard and first time director Chris Foggin have given us, here, too. Foggin might be error two, but he was not given much leeway.

The third mistake was casting character actor Daniel Mays in the lead, romantic role, particularly as (fourth mistake) this role dominates the fishermen’s story, although it is 99% fiction. Mays has contributed to ensemble casts in Mike Leigh’s All or Nothing and Vera Drake, and the affable Made in Dagenham, but he lacks the charm and charisma necessary to woo a wary fisherman’s daughter and hold our interest as he defies the patronising city suits in backing this unlikely boy band.

Filmed on location in Port Isaac and using the real Golden Lion pub (the object of another fictionalised sub-plot) where the friends gather, the locations are indeed a bonus. It’s just a shame filming had to take place in cold weather (probably to avoid the tourist season), leading us to wonder about the stag party – that brings Danny to Port Isaac – planning to spend the weekend boating.

The pub owner, Rowan, is played by Sam Swainsbury who has a lovely voice. There is a subplot about the finances of his pub. Danny’s well-meaning attempt to help him sell it backfires when his commission as broker is discovered, confirming a wary Jim’s worst suspicions about the real motives of this outsider . James Purefoy’s Jim also does some credible singing and is the main fisherman character with a small back story explaining why he is single and so protective of his daughter.

Jim’s father in the film, Jago (David Hayman), is the butt of the cynical British music industry’s ageist jokes about the ‘boy band’. But the filmmakers cannot avoid their own ageist contribution and Jago, a rugged and seemingly healthy man of only 71, is sentenced to sudden death for no apparent reason. Trust me, this is not a spoiler. 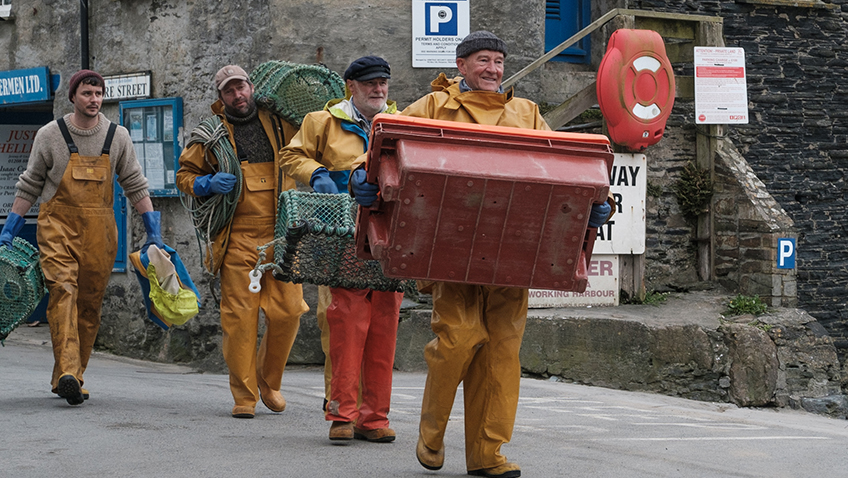 Although the real Fisherman’s Friends sing in the film, and have cameo parts, Jim, Jago and Rowan are a composite of several of the fishermen as the film can only realistically focus on four of the ten. You could say that is because, for commercial reasons, most of the time is taken up with Danny Brown’s romance with single mother and B & B manager Alwyn, Jim’s daughter. No such person as Alwyn existed in real life, but it’s nice to see Tuppence Middleton on the screen (she was good in the TV remake of The Lady Vanishes), albeit in a thankless role.

is at its best when the men go to London to ‘sell’ their demo and become fish-out-of-water in their own right. But they have an advantage of provenance and win over everyone they meet. A sing-along in a London pub is delightful, and you can just imagine it happening in real life. A rainy afternoon in the city: a few regulars and tourists become curious when a group of ten men from Cornwall with submariner jumpers and blue jeans, downing the overpriced lager are bursting into song. In a nice touch, they stop in front of a restaurant window marvelling that one serving of the fish they catch by the boatload sells for £30.00. They calculate that if they dispensed with the middleman, they could get rich.

Whether or not they do get rich, Fisherman’s Friends turned into a gold disc

, becoming the first traditional folk act to land a UK top ten album. Captions tells us that the group continue touring (two members were killed in 2013 in a tragic accident on tour) and even made it to the Pyramid Stage at Glastonbury.