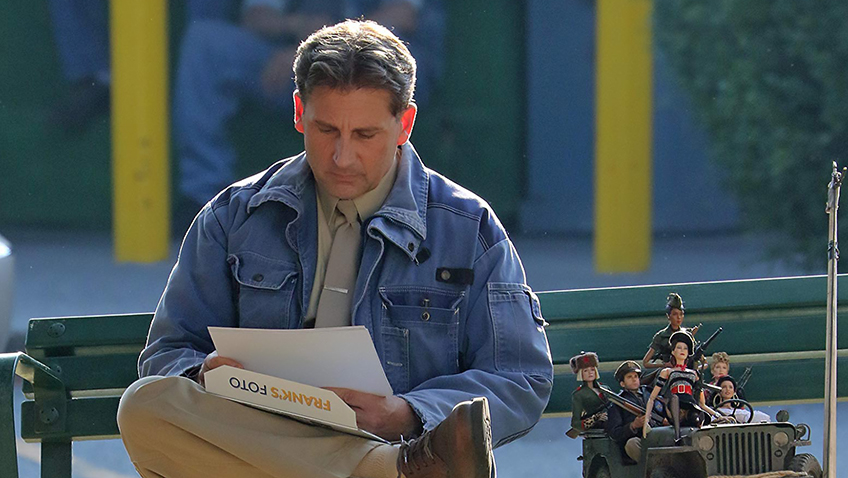 If the human body has proven to be an astonishingly resourceful instrument for recovering from trauma, it is nothing compared with the mind. In 2000, Mark Hogancamp, a 38-year-old divorced alcoholic, retail showroom designer, and closet cross-dresser with an honourable discharge from the navy was savagely beaten by five white thugs outside a bar near Kingston, New York. He was left for dead. When the insurance money and physical therapy ran out, Hogancamp began constructing a miniature village set in WWII Belgium, complete with handmade shops, furniture, guns and enhanced model figurines. And then he began photographing the daring exploits of his alter-ego, Captain Hogie (Steve Carell) and the Barbie-doll army who protect him from the Nazi enemy. In time, the New York art world came calling and Hogancamp was given a solo exhibition of his photographs.

Hogancamp’s brain was transposing his trauma into an active plan in which he could reverse his victim status and his alternative reality became his way of coping. It is the stuff that psychiatrists, neuroscientists, behavioural therapists, documentary filmmakers and special effects gurus alike would love to sink their teeth into and the story has that human element to fascinate us all.

Following Jeff Malmberg’s 2010 documentary Village of the Dolls AKA Marwencol, it was perhaps inevitable that American director and special-effects supremo, Robert Zemeckis (The Polar Express, Beowulf, Forrest Gump, Back to the Future Part II and Part III) would go one step further. Unfortunately for Hogancamp and anyone buying a ticket, it is Zemeckis’ first massive misfire.

In Welcome to Marwen

Zemeckis not only animates Hogancamp’s photographic stories, but makes them hyper-real by digitizing real actors and then turning them into plastic dolls with incredibly detailed costumes and features, but disturbingly visible joints. In the first disorientating sequence we watch as Captain Hogie’s plane is hit and he lands it with skill in enemy territory. His boots are caught alight in the fire that engulfs his plane as he bails out and he is relieved to spot, conveniently placed on an abandoned German tank, a suitcase with a pair of woman’s high heel shoes. Hogancamp was never a full cross dresser like that other artist who will come to mind, Grayson Perry, but owns a sizeable footwear collection. 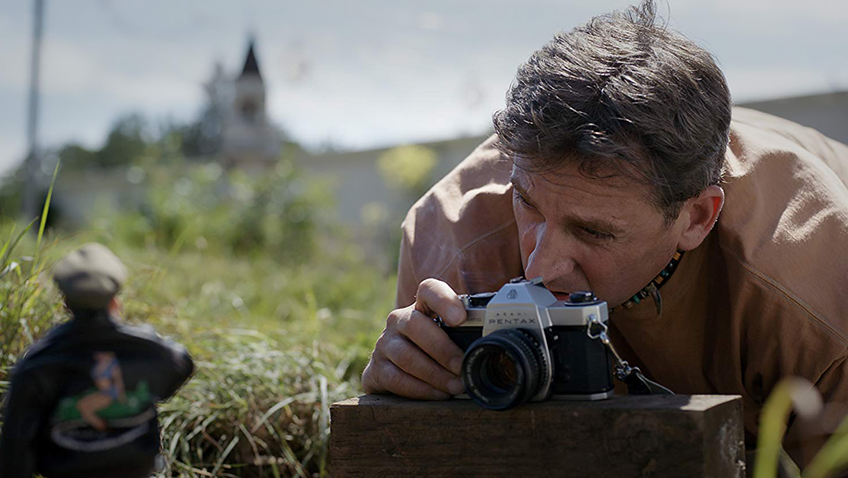 Steve Carell in Welcome to Marwen

Making his way across a field in his new shoes, he is ambushed by five Nazi’s. Just as he is about to be executed, a group of scantily dressed, beautiful Barbie-babes emerge from the long grass and fell the Nazis in a blaze of gunfire.

might also remind viewers of Quentin Tarantino’s WWII film Inglourious Basterds in its sometimes deadly serious, sometime cartoon depiction of a dedicated squad of Jewish heroes with a personal commitment to destroying Hitler. If that film was similarly short of emotional involvement, it did provide some fine ensemble acting and a lot of suspense. Welcome to Marwen

offers only a bewildering performance from the very versatile, talented Mr. Carell.

The problems begin when we have to reconcile Hogie with Hogancamp, for the protagonist’s imaginary world is far more interesting than his real one. The real Hogancamp lives in a cramped caravan which in the film becomes a spacious, relatively uncluttered bungalow.

A story framework is created around Hogancamp’s overcoming his fear of facing his assailants in court with his ability to break free from the witch Deja (Diane Kruger) – a pill-dispensing predatory figurine who imprisons him in his imaginary world like the angel of death. His relationship with her is made out to be an unhealthy dependency – as opposed to his other relationships which are therapeutic. This dramatic arc does not really work and seems prescriptively facile as a resolution. 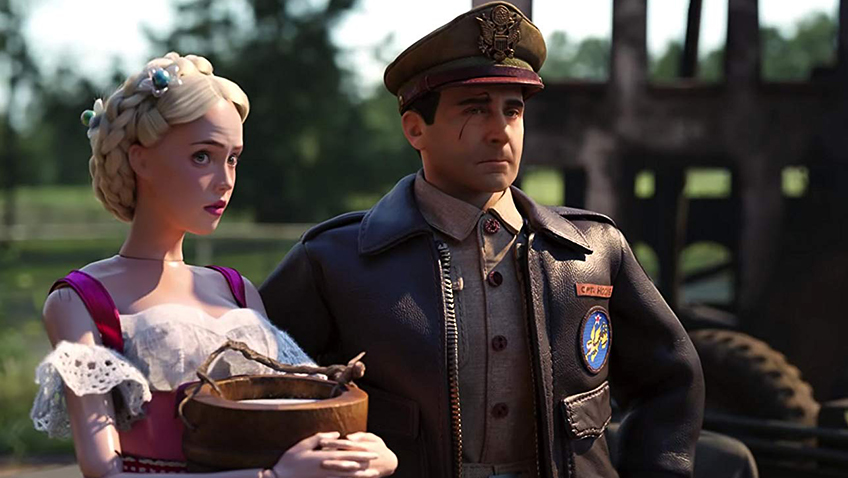 Steve Carell and Siobhan Williams in Welcome to Marwen

Carell plays Hogancamp like a victimized Forrest Gump whose conception of women resembles that of a 12-year-old boy who has found a stash of girlie magazines and plays too many video games. The script is surprising in that Zemeckis co-wrote it with Caroline Thompson, the talented writer (or co-writer) of such dark, unsentimental and non-sexist scripts as Edward Scissorhands, The Addams Family and Corpse Bride.

We gradually realise that the women in the town, and the Nazi attackers, are modelled after real people (Marwen, later changed to Marwencol, is named after Mark, Wendy and Colleen, women he had crushes on) transposed of course.

Alarm bells ring from the get-go when we see the Marwen babes in their sexy outfits (no uniforms here) with their impossibly skinny legs, large breasts, perfect skin and machine guns strapped to their chests. The all-female inhabitants of Marwen protect not only Hogie, but any woman who forms an emotional attachment to him. Early on a young milk maid succumbs in this manner. 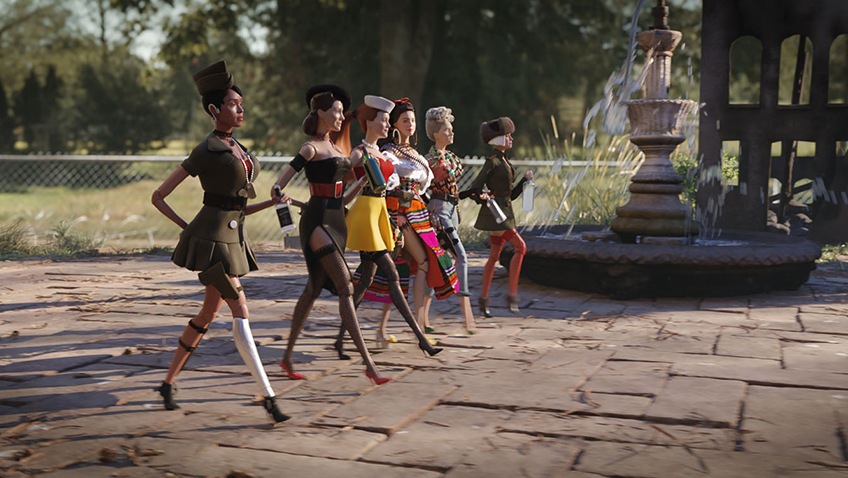 Then we meet the long-suffering model-store manager, Roberta (Merritt Wever) who has been turned into a Marwen character who runs around with her top split open and her breasts exposed after an assault. That Roberta is aware of this association and still chases after a romantic relationship with Hogancamp is way outside of most female viewers’ comfort zone.

But Roberta has to wait for the film’s cringe-worthy happy ending, for she is too plain and home grown to be the frontrunner. First Roberta has to sit around listening to Hogancamp talk about his new neighbour Nicol (Leslie Mann), a single woman who ends up in the middle of nowhere, pursued by her abusive ex-boyfriend (you can never imagine the two had anything in common), who becomes the film’s most dangerous and persistant Nazi perpetrator.

In a painfully drawn out relationship, sweet Nicol becomes inexplicably chummy with Hogancamp and he interprets her neighbourly interest as love. It is difficult enough for us to feel much for Hogancamp as a protagonist, but the thought of him as a love interest, dejected or not, is nothing short of creepy.