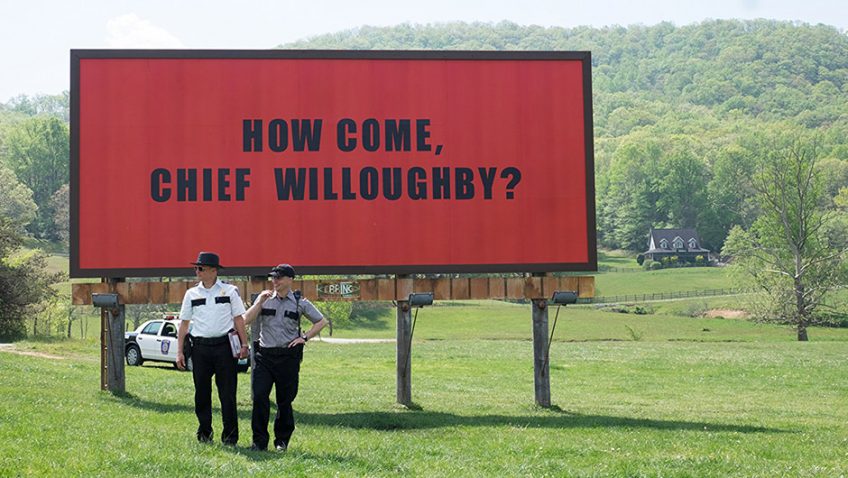 As unpredictable as the human heart

is is already gathering awards. Frances McDormand, who won an Oscar for her relentless, pregnant police chief in the Coen Brothers’ 1996’s film Fargo, now portrays 60-ish grieving mother Mildred Hayes, determined to expose the inept police department of Ebbing, Missouri. Few would begrudge McDonagh a second Oscar here. For the film soars on an intricately woven, poetic script borne by her, and Sam Rockwell’s charisma, but when McDonagh self-indulges, scenes misfire.

Weathered and running on adrenalin, Mildred Hayes (McDormand) is a plain-speaking, foul-mouthed, wronged mother, who, like the wrath of god, slams $5,000 on the table of Red’s (Caleb Landry Jones, excellent) pokey advertising company. ‘What’s the law on what you can and cannot say on a billboard?’ she asks Red, an easy-going, gay, young man. Not that Mildred cares much what the law says, but she plans to rent three abandoned billboards on a little-used road near her home.

After a tip-off, Chief Willoughby (Woody Harrelson) drives along that road, reading, in black capitals on a blood-red background: RAPED WHILE DYING. STILL NO ARRESTS? HOW COME, CHIEF WILLOUGHBY? It’s obvious to the whole town that Mildred is referring to the brutal murder of her teenage daughter Angela (Kathryn Newton) seven months earlier.

Subtly and diplomacy are not Mildred’s weapons of choice. In justifying her anger and the billboards, she says, ‘it seems like the local police department is too busy goin’ round torturing black folks to be bothered doing anything about solving actual crime. I thought these here billboards might, y’know, concentrate their minds some.’

It does that, but the billboards provoke a trail of reactionary and unintended consequences that isolate Mildred in her guilt and grief. The billboards also lead to unlikely relationships as McDonagh reveals hidden dimensions to characters we think that we have pinned down. 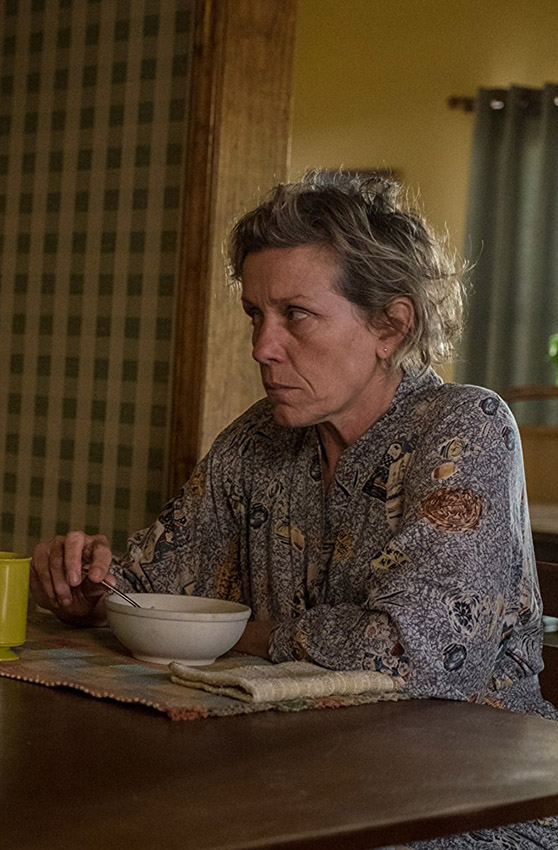 The billboards polarise the town, but McDonagh creates characters and situations that confound our expectations. Mildred point-of-view dominates the beginning of the film, rallying the audience behind her indignation. Her righteous anger sets the stage for a showdown between the negligent cops and the grieving mother.

But no sooner does McDonagh set up a collision course then he bends the road. Willoughby pays Mildred a visit, not in anger, but in sympathy. He is not only genuinely desperate to find Angela’s killer, but he has spent months following up dead leads while dying of cancer. Mildred might be shaken by this news, but she must maintain her steely stance if she is to deflect her own guilt.

Sadistic, racist, homophobic and impulsive, Officer Jason Dixon (Sam Rockwell, in an Oscar-worthy performance) is a thorn in everyone’s side, though Willoughby alone recognises his potential. Unmarried, he still lives with his mother (Sandy Martin, superb) a sedentary redneck with a butch hair-cut and a face like a brick wall. Mama Dixon goads her son and belittles him in equal measure, and never gives him sound advice. But through the clever device of a posthumis letter, we learn that Dixon has a back story that makes a tender gesture so moving and helps explain his situation. If nothing excuses his psychopathic conduct, Dixon pays his dues

McDonagh has a talent for creating quirky, but not annoying, characters. Some of these we can put in Mildred’s camp, even if no one condones her uncompromising tactics. No one is superfluous. Each character holds a key that unlocks a different aspect to Mildred as she deals with her grief.

There’s James (Peter Dinklage) a height-challenged, kind-hearted salesman who is, unlike Mildred, not isolated in society by choice and who finds himself the brunt of Dixon’s off-colour remarks. Charlie (John Hawkes), Mildred’s ex-husband, is living with a sweet, 19-year-old air-head (Samara Weaving) who is, perhaps his way of dealing with his pain. The break-up of their marriage followed Angela’s death, and from Charlie (and a flash-back scene) we learn of Mildred’s inadvertent role in Angela’s death. Robbie (Lucas Hedges, from Manchester by the Sea) is Mildred and Charlie’s level-headed son, torn apart by mixed allegiances. He runs to his mother’s defence, but is embarrassed by her extremism and resentful that she seems to forget that he, too, misses his sister.

Curiously, in the production notes, McDormand says of her character: ‘I think it’s important that the only weapons Mildred ever uses are her wits.’ Has she seen the film? Mildred slaps her daughter, kicks two of Robbie’s school mates in the groin and throws several firebombs into the police station. And while Woody Harrelson gets top billing over Sam Rockwell, after his sympathetic talk with Mildred, Willoughby has served his purpose. Yet McDonagh insists on giving him a long, quirky family outing during which he swears like a sailor as his little daughters smile back adoringly. This is followed by a maudlin scene with his much younger wife (Abbie Cornish, wasted) and the execution of a selfish, violent act that no loving, family man would commit.

Though all of the characters’ lives intertwine, Mildred and Dixon have more in common than either would care to admit. Mildred refuses to accept what Willoughby tells her – and then writes to her in a note- about the nature of the crime, while by some cross pollination, Dixon gets it. And because of that, Mildred arrives, in a roundabout way, in Willoughby’s shoes: following dead leads and realising (though she isn’t dying of cancer) that nothing will relieve her pain. As for Dixon, even this loser, horrifically and metaphorically scarred for life, goes on a heroic journey that is as unpredictable as the human heart.