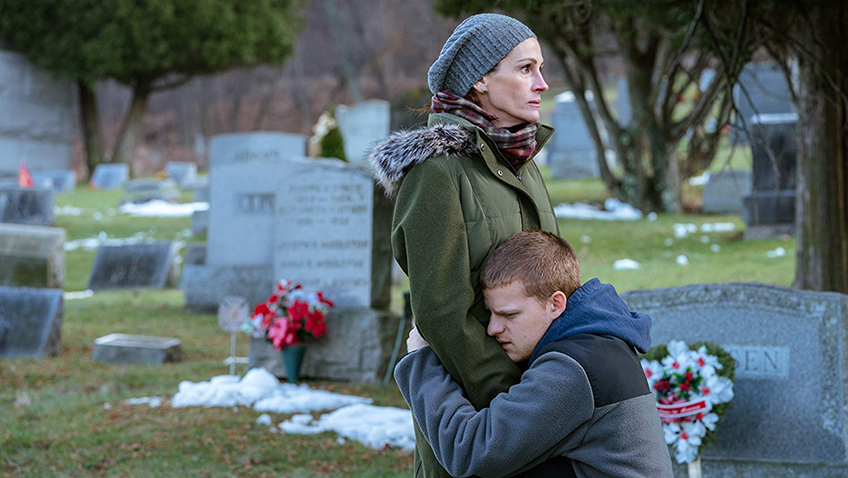 Movies on topical issues often come in pairs, and even when two films that deal with two different topical issues, are released within months of one another, that’s not usually a problem. Such is the case with the topic of gay conversion therapy: The Miseducation of Cameron Post (9/18) and Boy Erased (2/19) and the topic of teenage drug addicts: Beautiful Boy (1/19) and this week’s Ben Is Back

. Things only get confusing when a certain Lucas Hedges shows up as the central character in two of the films, covering both issues: Boy Erased and Ben Is Back

. Both Ben Is Back

and Beautiful Boy focus on the impact of a son’s drug habit on his family. Fortunately for Ben Is Back

, Julia Roberts is back, and her performance as the mother who won’t give up on her son is something to behold.

You don’t need to worry about a script half as much with Roberts registering on her expressive face and in her body language every emotion we are meant to receive when Holly, Ben Burns’ mother, and her two mixed-raced children from her second marriage, come home from Christmas shopping to find Ben in front of the house. He proclaims that he’s been clean for 77-days and his sponsor is delighted. But why is he back from the rehab centre without advance notice from the sponsor or doctor?

You don’t need to worry about a script half as much when it is written by Peter Hedges, either. While Hedges (What’s Eating Gilbert Grape, About a Boy and Pieces of April, which he also directed) can write with a heavy hand and Hollywood conventionality, it is only toward the end that this script stumbles. If Lucas looks remarkably like Peter, it is because they are father and son. A lot of a father’s anguish comes out in the script and is channelled into Roberts’ role convincingly.

Ivy Burns (Kathryn Newton) 19-year-old Ben’s kid sister is apprehensive as we are given the impression that her life has been disrupted by her brother’s lies, cajoling and false promises of new beginnings. A brilliant student, Ivy is university bound and sings in the Church choir, but she is not the obnoxious know-it-all sister. It is just that her compassion and sisterly love have been replaced by suspicion and fear.

Holly’s second husband, Neal Beeby (Courtney B. Vance) is even more wary with their two young children around. We get the sense that Ben has wrecked more than one family holiday. “If he were black, he’d be in jail by now,” Neal argues, and Holly, who knows that it is Neal paying for her son’s drug rehab, has to put his pragmatic reason over her hopeful heart. 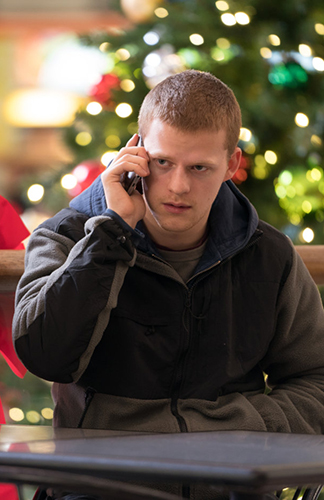 Lucas Hedges in Ben Is Back

Sensing he is losing the battle, Ben declares, ‘you’re still afraid of me; you should take me back.’ If that is a manipulative ploy, it works. Neal submits to his wife’s accusation that ‘you are giving up on him.’ Holly and Ben make a deal. He gets 24 hours with the family during which time he will never be out of his mother’s sight. First, she administers a drug test, which he passes.

This is a great set up for a film that could otherwise be predictable, sentimental, static and lacking in suspense. First, it guarantees Roberts a major role in a position akin to that of Clint Eastwood when he is assigned to escort a cagey witness from Las Vegas to Phoenix in The Gauntlet. Second, the time frame is known and is tight. To put it crudely, Ben Is Back

becomes a ‘will he or won’t he’ kind of film, but it’s more too, as cheesy as it might be, Hedges turns Ben’s stay into a dark thriller.

Ivy notices her mother is hiding anything resembling a drug in the house: removing temptation. You can tell that Holly knows almost as much about drug addiction as her son, and the film is, to some extent, a battle of wits and wills. When Ben asks to go to the shopping mall to buy his siblings gifts, Holly pre-empts him: she has bought them gifts for him. But Ben persuades her that he wants them to know the gifts are personal. In the mall there are two significant encounters. One is when Ben sees a former dealer/junkie lurking with repercussions in the film’s second half.

The other is when Holly bumps into a hypocritical, smug retired couple. Civil, at first, she points out her son, whom the man, a doctor, claims not to remember. ‘When he was 14 he had an injury and you prescribed painkillers and kept upping the dose,’ she says, her voice rising. After wishing the old man a horrible death, she drags Ben home. This is a clever way to give us the back story while avoiding expository dialogue. We will learn more about Ben’s past when the family dog, Pons, is stolen.

So far, Hedges has kept us hooked by suspense and tension. When the family return from Church where Ivy sings a beautiful hymn that leaves Ben in tears, they discover that their beloved dog Pons is missing. Ben immediately suspects it is revenge from the drug community, hidden behind the façade of the sleepy, snow-covered suburban, middle-class, commuter belt-town in up-state New York. 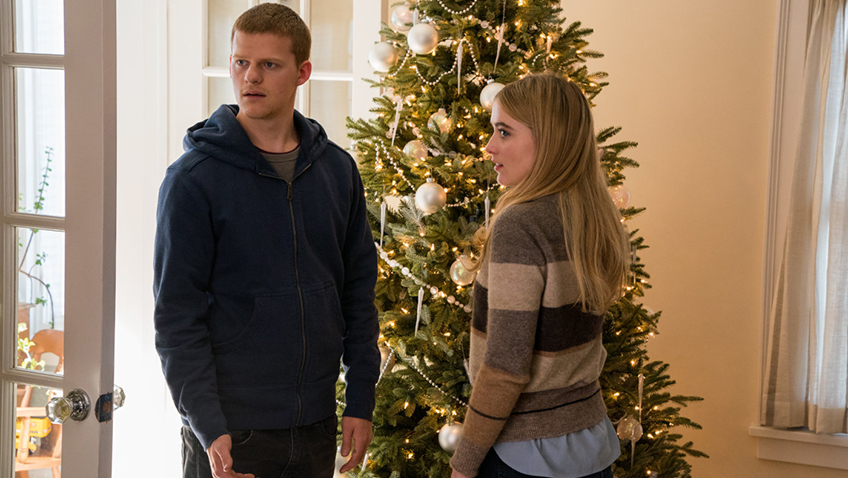 Kathryn Newton and Lucas Hedges in Ben Is Back

The rest of the film is a thrilling tour of the town’s nightmarish underground as Ben, with Holly driving, look for Pons. Each door that Ben knocks on provides the increasingly faltering Holly with a snapshot of a boy she can hardly recognise. Ben, wisely, spares her (and us) the details, but it’s clear he is not just a victim.

After Hedges burst on the scene with an attention grabbing performance in Manchester by the Sea, he is the actor to call when you need a ‘troubled youth’, hence his casting in Boy Erased, based on a true story. Directing, as Peter Hedges does, his own son in such a painful role cannot have been easy. Lucas might be a millionaire at age 22, with a strong work ethic, but as the deaths of River Phoenix, Heath Ledger, Robin Williams and Philip Seymour Hoffman make clear, money and success at any age do not guarantee immunity to drug addiction.

A scene in which Ben is made to honour an old debt seems far-fetched and contrived, and you feel egged on with the focus on a pill in Ben’s hand. A confrontation with a dealer seems artificial, even clichéd, perhaps because we are veering too far from Holly’s point of view. If the ending turns melodramatic, it is, perhaps inevitable, and is preferable to sentimentality. This is arguably Roberts’ best role since Erin Brockovich, a film that will always evoke memories of her co-star, Albert Finney, who died in February.