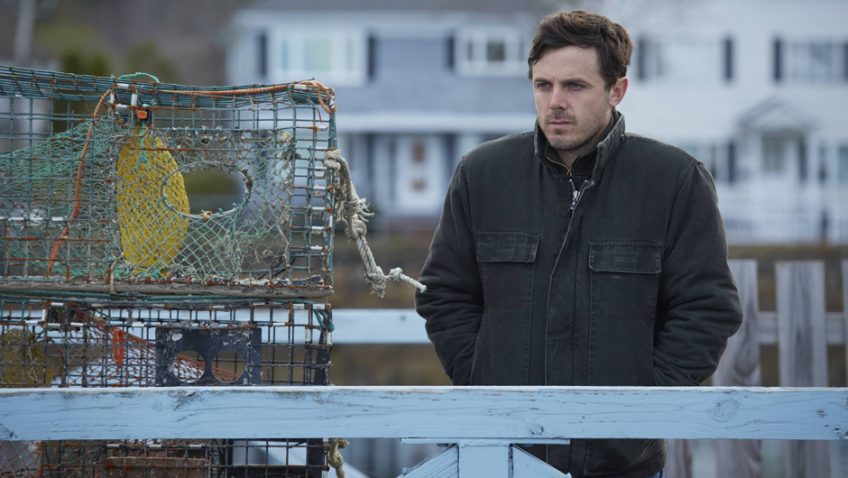 Until the very end, it is only in flashbacks that we see Manchester by the Sea

, a picturesque coastal town on Cape Ann, Massachusetts, in the summer time, when this fishing village and beach resort comes to life. For most of Kenneth Lonergan’s (Margaret, You Can Count on Me) film, beautifully shot by cinematographer Jody Lee Lipes, we see the town off-season when the ground is too cold to bury a corpse. At the centre of Manchester by the Sea

is a tragedy about unspeakable loss and guilt, but the film is also about an emotional thawing when the past can be, if not forgotten, then at least buried.

In the film’s opening scene, set in the distant past, it is a glorious summer day and a young boy named Patrick Chandler (Ben O’Brien) is fooling around with his Uncle Lee Chandler (Casey Affleck) on his father Joe’s (Kyle Chandler), fishing boat, while Joe steers up front. When Lee asks Patrick who he would be happiest with on a desert island, Patrick or Joe, Patrick does not hesitate before choosing his dad. It is only later that we learn how prescient this banter proves to be.

As with You Can Count on Me (which would be an apt, if tonally inappropriate title for this film), a troubled, and nearly penniless young man returns to his hometown where his sibling and nephew still live. Lee is a janitor working in Quincy, Massachusetts where he lives alone in a dingy, depressing, grace-and-favour basement room. He is a reliable and skilled worker, but is full of pent-up anger, answering back the demanding residents of the two apartment buildings under his care and starting fights in his local bar.

Then one snowy day, he receives news that his brother, Joe is hospitalised. Lee takes leave and makes the two-hour drive to his hometown, Manchester, where he learns that Joe has not survived. Fortunately, a close family friend, George (CJ Wilson), offers to help with the notifications and funeral arrangements. In a flashback we learn that Joe had been diagnosed with heart disease, a diagnosis that prompts his hysterical, argumentative wife, Elise, (Gretchen Mol) to leave the hospital room.

Lee is surprised and annoyed to learn that Joe’s will has made him legal guardian of his nephew Patrick (now played by Lucas Hedges). Joe has left money for Patrick’s foreseeable needs and Lee is to live in Joe’s home which is held in trust for Patrick.

Lee is uncomfortable with the arrangements, but the alternatives prove equally problematic. Patrick refuses to leave Manchester where he has friends, two girlfriends (whom we meet), hockey, a music band and school. In a confrontation with Lee he points out with the cruelty of a wounded youth that Lee can be a janitor anywhere. Despite Lee’s attempts to find a surrogate family for Patrick he does not want Patrick to live with his estranged, alcoholic mother Elise. In a tense and compelling scene, Patrick has lunch with his mentally unstable mother and her manipulative, oppressive Born-Again Christian fiancé (Matthew Broderick) Casey Affleck and Lucas Hedges in Manchester by the Sea

When Lee goes to collect Patrick from hockey practice the reaction of the coach and students suggests what we suspect: that Lee has a dark past that caused him to leave Manchester and might explain his dead eyes and dead-end job. The mystery also explains why Lee would find it so difficult to live there again, let alone find a job. While typecast, Affleck is utterly convincing in a role that is difficult to get right.

The mysterious past is a tragic one that separated him from his wife Randi (Michelle Williams). It has changed him into a self-loathing man with nothing to live for. As flashbacks explore the tragedy from which Lee will never recover, his relationship with Patrick carries us forward into the unknown territory of the heart. The relationship is not always easy but provides the film with much need humour. The contrast between the lonely, secretive uncle and his extroverted popular, but also vulnerable, nephew is as beautifully written as it is acted.

Michelle Williams (Blue Valentine, Brokeback Mountain), who plays Lee’s ex-wife, has been nominated for a Best Supporting Actress BAFTA award on the basis of a three-minute encounter with Lee toward the end of the film. She appears briefly in two earlier flashbacks, but this intense, real-time two-hander in the film’s present will bore a hole through your heart.

That this scene will leave you in tears where many others do not is not only down to the spontaneity of the dialogue (which sounds adlibbed) and precise acting, but to the fact it occurs in the present. And that is the problem with Manchester by the Sea

But Lonergan rejects the tragic label by balancing the misery with humour, redemption and forgiveness, and, generally, with enough subtlety that the balancing emergences organically and does not appear contrived. In Manchester by the Sea

, as in his previous two films, Lonergan refuses to wrap up loose ends and deliver neat, happy – or unhappy – endings. In his director’s statement, he claims to have found the idea for the film from watching swans on the Essex River in Cape Ann protecting their young. That might have been the spark behind the film, but it is where Lonergan goes with this idea that makes all the difference.