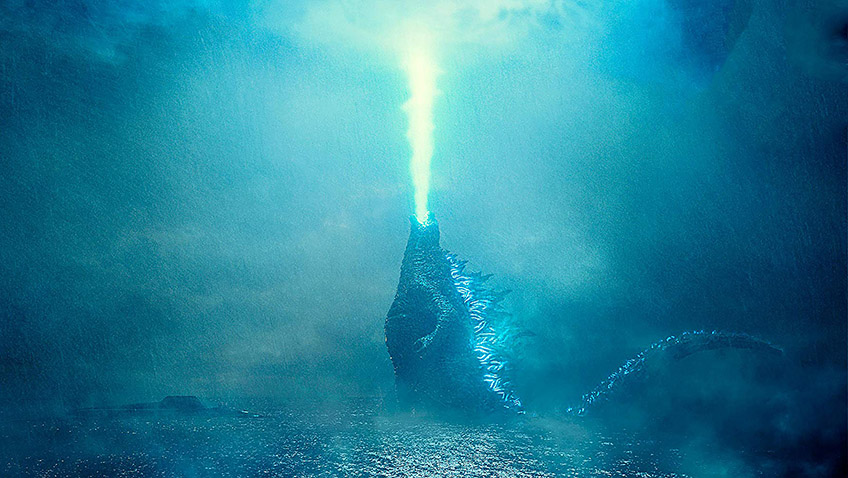 Two of the West’s biggest Japanese imports are kaijū, a genre featuring giant monsters attacking big cities and one another; and Tokusatsu, a movie heavily dominated by special effects. Arguably the most famous film in the genre is Gojira (Godzilla) co-written and directed by Ishirō Honda in 1954. That date is significant, being just 9 years after Hiroshima and Nagasaki. In the film, scientists conclude that the monster Gojira has been disturbed from its deep underwater natural habitat by underwater hydrogen bomb testing and a robust allegory is born. To say there have been countless films and television series based on this original would be an understatement, but it wasn’t long before America took over both genres and turned them into ‘the summer blockbuster.’

In 2014 Legendary Pictures and Warner Brothers (companies that represent two of the largest chemical polluting nuclear powers on earth, China and the USA respectively) rebooted the franchise, and indeed the genre, with two entertaining revivals: Gareth Edwards’ ‘Godzilla’ and Kong: Skull Island. The relatability of the new franchise is the current urgency about climate change and the revolt of nature, an allegory present, if more muddled and less entertaining, in co-writer/director Michael Dougherty’s (Krampus) Godzilla: King of the Monsters

The excellent acting and Max Borenstein’s layered script that allowed us to empathise with the characters and care about them in Godzilla (2014) has been eclipsed by the addition of new monsters, brought to life with painstaking detail right down to the sound these Titans might have really made, and the predominance of a organisation called Monarch. The actors and characters in this sequel are reduced to reaction shots of awe and fear, sometimes nuanced with finer emotions, such as defiance, doubt and regret. But there’s no avoiding the number of wide eyes.

The new plot centres on respected palebiologist Emma Russell (Vera Farmiga, Up in the Air) who enters into an uneasy coalition with a demented eco-terrorist (a humiliating role for Charles Dance) in an ideological battle with her ex-husband, animal behaviour specialist Dr Mark Russell (Kyle Chandler) that sees their daughter, Madison (Millie Bobby Brown in her feature debut) torn between the two.

If the 2014 Godzilla featured a father-son relationship this sequel features a mother-daughter relationship. Madison grows sufficiently during the course of the film to see her parents not as people to follow blindly, but as flawed human beings. 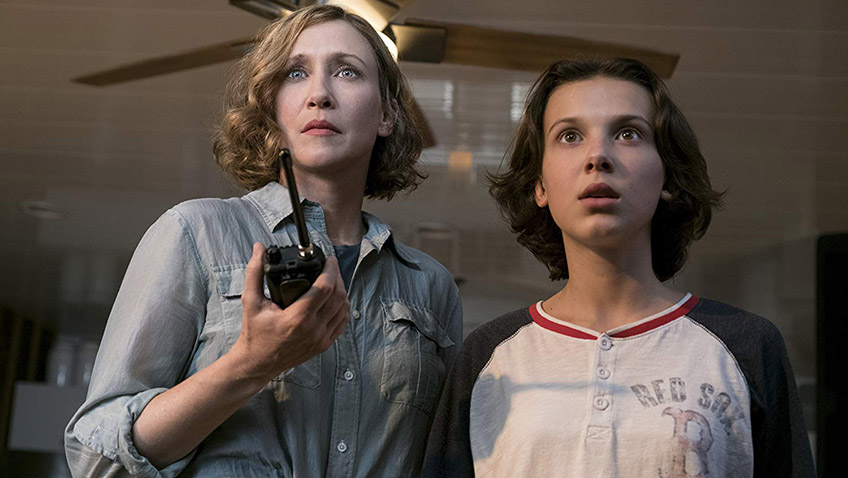 Vera Farmiga and Millie Bobby Brown in Godzilla: King of the Monsters

Reprising their roles in the 2014 film, is John Sayles muse David Strathairn (Good Night, and Good Luck, Limbo, Matewan) here shamefully underused as Admiral William Stenz; and Ken Watanabe and Sally Hawkins (who will be identified forever for her affinity with water-based monsters after her starring role in the Oscar winning The Shape of Water). It is ironic then that Hawkins is given a non-role here with nothing to do. Despite his big moment and self-sacrificial gesture towards the end, in a key scene adapted from the 1954 original, Watanabe joins the rest of the cast in being reduced to a number of reaction shots.

Gareth Edwards was due to return to direct the sequel, but dropped out, and his absence is felt. He had a way of shooting the characters from the human point of view that put us there and there emotional involvement in the story felt real. In Godzilla: King of the Monsters

, the emphasis is on the Monsters and Monarch, a crypto-zoological organisation whose mission is to track down and study Titans (its term for all these monsters). What is curious is that despite their multi-billion dollar facilities around the world that are holding various monsters with the capacity to destroy the world (picture a chain of Guantánamo Bays for Titans), Monarch seems to be run independently of the world’s governments. That is probably a good thing, as when any group of men with guns appear, their inevitably heavy-handed tactics aggravate the situation. We have an example of this shoot-first policy when Dr Emma Russell successfully experiments with an invention she developed (at first with Mark), the Orca, to control a monster using bioacoustics on a sonar level.

Nonetheless, with such an enormous budget, Monarch depends on some military, or NGO support and international backers. There is little evidence, however, of the USA, or the German and French battling the Russians and Chinese on the big environmental decisions that form the basis of Emma Russell’s rebellion. 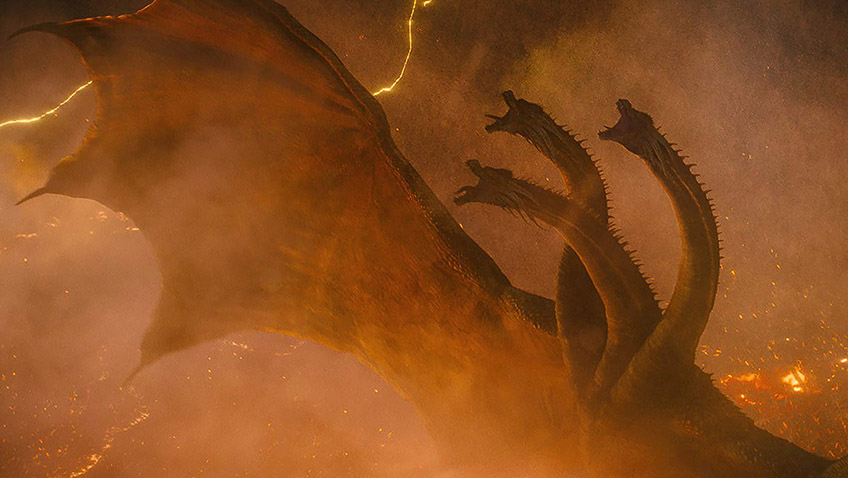 King Ghidorah in Godzilla: King of the Monsters

Emma is facing the same conclusion as super villain Thanos in Avengers: Infinity War, and her solution is just as blunt, politically incorrect and counter-productive. This might not be the reason for her divorce from Mark, but her ‘for the greater good’ thinking is cause for concern. Tied in with this population reduction strategy is some discussion about scientific proof of the monsters regenerating the earth, but it is not easy to make sense of it.

The second half of the film focuses on the endless battles between Godzilla and an array of traditional Japanese monsters, benevolent Mothra, rogue Rodan and its ultimate nemesis, Ghidorah a vindictive, fire-spewing, burgundy-coloured, three-headed dragon with golden scales and two tails. Children and fans of all ages will love this no doubt, but as it goes on and on, mature audiences, mindful of the cost to society of all this Transformers-type destruction, might grow wary. We see the world (curiously reduced to the Eastern seaboard of the USA) being destroyed by those fights. The finale reduces Boston Massachusetts, with its 100 universities, renowned art museums, historic buildings and libraries and its atmospheric fishing and manufacturing towns – not to mention its population – to ruins. Somehow we get the odd news broadcast coming from somewhere.

The mythical origins of these monsters is present and expounded upon in the film by Dr Ilene Chen and her twin sister (both played Ziyi Zhang, Memoirs of a Geisha) who are third-generation Monarch workers and mythologists. As these monsters are ancient something is to be learnt apparently from deciphering their mythological back stories. Nothing much comes of these efforts or of Ishirō Honda’s interest in learning from Gohira how to make human beings resistant to radioactivity.