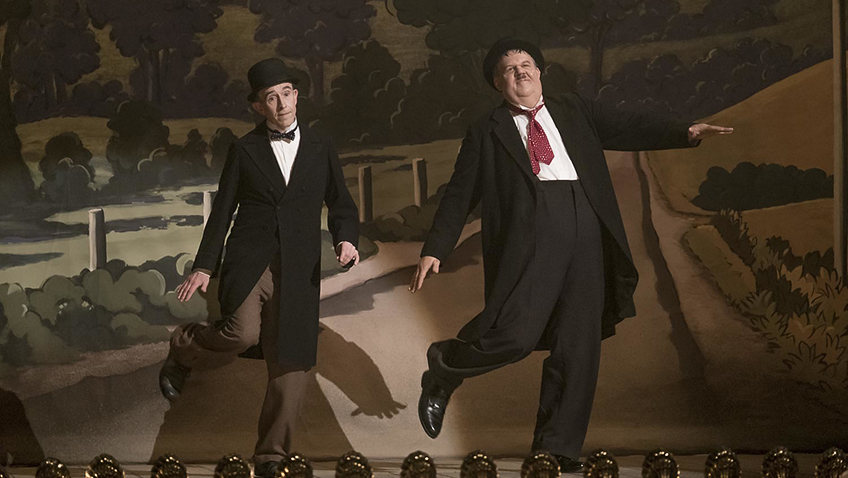 Laurel and Hardy are back in Britain for a final tour

Stan & Ollie (Entertainment One). This gentle and affectionate tribute to the great comic double act of the 20th century concentrates on their tour of Britain in 1953 when they were no longer bankable. Jon S. Baird’s film draws directly on two music hall sketches (The Hospital Visit and The Station encounter) and their little dance. The gags and routines (with hats and bells) refer to their films. Steve Coogan and John C. Reilly are very convincing and get the business absolutely right. Coogan as Stan proves yet again what a good actor he is. Reilly is brilliant as Olli: so perfect physically and vocally he could be Hardy. Hopefully, the film will encourage audiences to see the real Laurel & Hardy. The classic farce The Music Box, in which the duo attempt to carry a piano up a long flight of stairs, is their masterpiece.

Sauvage (Peccadillo) observes a 22-year-old French hustler, addicted to drugs and prostitution, and unable, physically ill though he is, to give up either. He sees no reason to do so. He can’t imagine another life. He enjoys working the streets and park. Homeless and lonely, he longs to be loved. He has no name, no back story; he is a wild animal and not reared for domestic life. Camille Vidal-Naquet’s film shows some of his encounters, ranging from tender to dark, harsh, sordid and one so violent it had audiences leaving the cinema when it was shown at the Cannes Festival. Félix Maritaud’s raw and charismatic performance, with his penetrating gaze and his determined rolling gait, is extremely watchable. His body language says it all. He won the Rising Star Award at Cannes.

Vice (Entertainment One) is a strange, confusing, too-clever-by-half satirical biog of Dick Cheney, Vice President to George W. Bush. Cheney was the power behind the throne and the power behind him was his wife. He lived a life of alcohol, fishing, mendacity, heart attack and transplant surgery. He was no respecter of democracy. Prosthetics transform Christian Bale, face, body and performance. Amy Adams is the wife with whom he communicates in Shakespearian language. Sam Rockwell is Bush. Steve Carell has fun playing Donald Rumsfeld. One of the high spots is the “power dance” sequence, which was strangely deleted but is made available here as an extra.