Home / LIFESTYLE / REVIEWS > / FILM REVIEWS / Jim Cummings’ tour de force performance is a knock-out, even if he is wearing too many hats 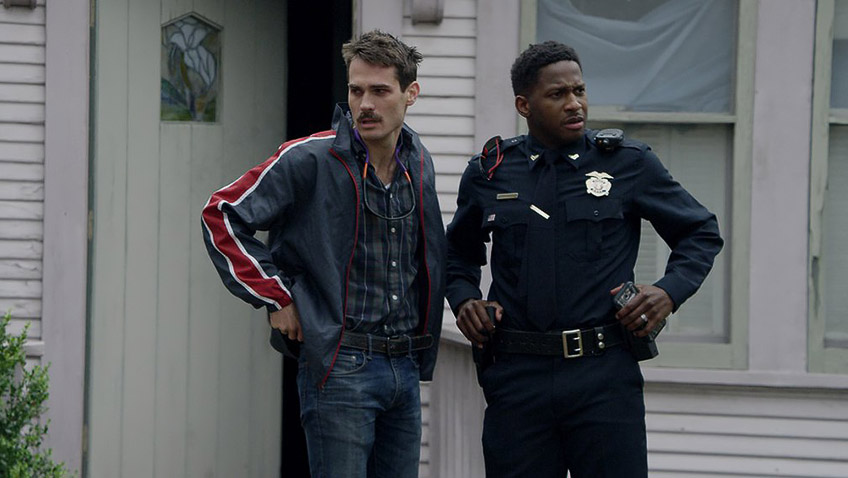 Jim Cummings’ tour de force performance is a knock-out, even if he is wearing too many hats

, are almost identical to a 12-minute short film he made in 2016. Shot in one long take, a good looking, lean, thirty-something uniformed officer Jim Arnaud (Cummings) gives a eulogy at his mother’s funeral that is like no other eulogy you’ve heard. Unable to contain himself, he sobs his way through increasingly incoherent praise and anecdotes about his mother, mentions his absent siblings and then dances to his mother’s favourite song, Bruce Springsteen’s Thunder Road

. Cummings not only directed, wrote and starred in the short, but co-edited it and was responsible for the music, a precarious feat of multi-tasking that he brings to the feature with less success. Despite a powerhouse central performance tied to an intriguing portrayal of a mental breakdown, other characters suffer while the script throws out intriguing threads that it fails to develop and bring together.

, here the CD player does not work. The viewer, who by now is squirming in his seat along with the mourners, cringes at the painful spectacle of Jim dancing awkwardly, but energetically, without the music. That’s just the reaction Cummings is after.

After the funeral Jim returns to work, but when he assaults a spaced-out tramp he is ordered his Captain (Bill Wise) to take the remainder of his compassionate leave. We assume that his belligerence was a result of the loss of his mother, but contradictions in his eulogy and aspects of his life cause us to question whether Jim was looking back through rose tinted glasses.

Divorced from Rosalind (Jocelyn DeBoer), Jim has joint custody of his daughter Crystal (Kendal Farr) whose strained relationship with her father has either been soured by her mother, by Jim’s quirks or both. One morning when Crystal is staying with Jim, he orders her to remove the make-up she is going to wear to school. Is this a matter of fitting in at school, pre-teen rebellion or is Jim missing the underlying reason for her low esteem? Jim adores Crystal and there are moments in the portrayal of the father-daughter relationship that are both truly funny and moving and feel too real to have been fabricated.

Later in the film a brilliantly directed scene at Crystal’s school sheds a bit more light on Crystal – and Jim. In a parent/teacher meeting, the teacher (an excellent cameo from Macon Blair, the star of the great film Blue Ruin) informs Jim that Crystal is to be moved to another homeroom due to her bad conduct. Our anticipation of some loss of control provides tension while Cummings turns the encounter into an absurdist comic act as Jim and the teacher square off in children’s chairs and Jim, who has grabbed a pair of scissors, attempts to pocket them before being noticed.

But, in a pattern we are beginning to recognise, the teacher touches a raw nerve when he mentions that Crystal has difficulty reading. Jim, who may be dyslexic, also has reading difficulties and with feelings of guilt, he blurts out that ‘she got that from me.’ Pained at this legacy to his daughter, he starts acting strangely, using the very expletives that the increasingly alarmed teacher had accused Crystal of using in class. 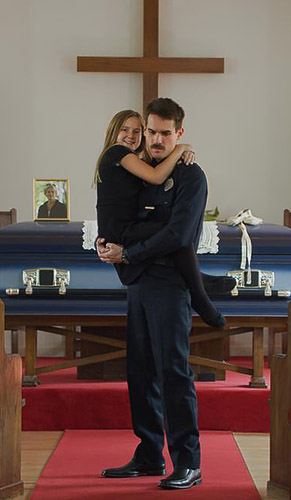 Arriving in family court with a good prospect of success, Jim’s overly sensitive and defensive nature causes him to antagonise the judge. The judge has seen the footage from Jim’s mother’s funeral and deems him unfit for custody. Broken and dejected, Jim, dishevelled and half-dressed, creates a scene in the police station car park which is clearly a cry for help. He turns violent, accusing his partner and best friend Nate (Nican Robinson) of failing to destroy all the evidence of the eulogy. Cummings the co-editor and writer seems unaware that this self-indulgently long-drawn-out scene is, for Cummings the actor, too much of a good thing.

Cummings wants to increase Jim’s ostracisation with this attack on his loyal friend. That’s fine, but Jim’s relationship with Nate, an African American, is underdeveloped. Later, in a Dr Jekyll and Mr Hyde shift, a humbly apologetic and sincere Jim tells a sympathetic Nate, ‘I’m sorry if I committed a hate crime against you.’

In an interview commenting on the creation of Officer Arnaud, Cummings said: ‘I knew it had to be a tough guy like a cowboy…and I knew I had to make him Southern because that was just so much more pathetic and harder to admit that you have problems in the south when you’re in this masculine tribe.’

While Cummings’ detailed, nuanced and incredibly convincing portrayal of a policeman with mental health issues cannot be faulted, the direction is at times at odds with the message. Some members of the audience were laughing out loud throughout the eulogy scene. Moreover, the film, which is constructed around a series of vignettes rather than a plot, gives us heavy doses of Jim’s histrionics while tugging us away to explore, with little help, the truth behind his mental breakdown.

Jim pays a visit to his estranged sister who suggests their selfless and generous mother was not such a saint after all, at least not with her own children. She invites Jim to stay overnight, but he leaves and that’s the end of the sister. Is it significant that Jim alone retains a memory of his mother that might not be accurate? We have seen that he is hyper-sensitive about his reading problems. Did his mother ignore this to pursue her own agenda or was Jim beyond help? And if he has such difficulty reading that he cannot help his young child, how did he pass the police exams?

Just when you are wondering where the film can go, Cummings delivers a climactic event out of left-field. This jolting contrivance was perhaps the easiest way to give the film a welcome uplift and to give the father, denied custody in law, a chance at redemption through his daughter. But it seems disingenuous to even suggest that, with all of their emotional baggage, life will suddenly change for Jim and Crystal. Or perhaps we are seeing things through the unreliable eyes of Jim Arnaud as he and his girl escape down Thunder Road, without the music of Bruce Springsteen.