Home / LIFESTYLE / REVIEWS > / FILM REVIEWS / Based on a riveting true story, Clint Eastwood’s film is as entertaining as it is problematic 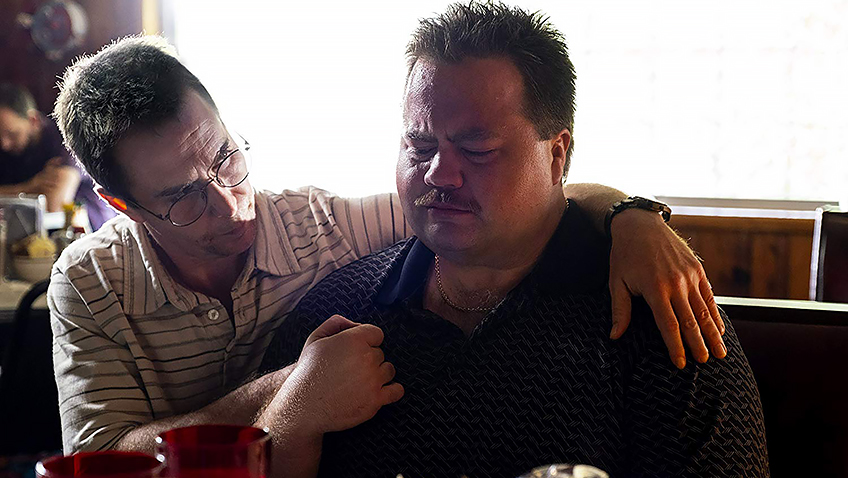 Based on a riveting true story, Clint Eastwood’s film is as entertaining as it is problematic

, a film that reignites Eastwood’s fascination with true stories in which ordinary men (and it is always men), doing their job, become heroes.

As he did in his more recent films, Invictus, American Sniper, Sully and The 15:17 to Paris, Eastwood also highlights the price that heroes have to pay for their glory. In the case of the little known (at least in this country) Richard Jewell, Eastwood gets to engage in some heavy-handed press and FBI bashing that would please America’s current President, who has been busy doing the same thing since his election.

We are in Atlanta, Georgia in 1986. Obese, creepy, twenty-four-year-old Richard Jewell (Paul Walter Hauser, I, Tonya, BlacKkKlansman), a post room assistant at the Small Business Administration is lingering around the office of stressed-out, bureau lawyer Watson Bryant (Sam Rockwell). He has put a stash of Snickers’ bars in Bryant’s desk drawer, and when Bryant, somewhat taken aback, asks him how he knew he liked Snickers, Jewell replies, ‘because I saw the wrappers in your bin.’

Jewell, who shares his dream of a career in law enforcement with Bryant, might be proud of his detective work, but Bryant is annoyed at anyone rifling through his bin. Later, the two meet up in the local pinball arcade. Jewell has no friends and seems delighted that Bryant, who relaxes by playing the games, talks to him.

When we next see Jewell, he is standing in the dean’s office, being sacked from his post as a campus security guard at Piedmont College for his heavy handed and overzealous interpretation of the school’s clampdown on drinking on campus. The dean has checked Jewell out and reveals that he was sacked from his previous job at the Habersham County Sheriff’s Office.

Jewell who is still living with his protective, devoted mother, Bobi (Kathy Bates), an insurance claims administrator, reassures her son who is starting a temporary job watching a camera crew’s equipment at the Georgia Olympics. ‘Maybe if I do a good job, they’ll take me back on the police force,’ he rationalises, reassuring himself that ‘it’s still law enforcement, even if it is just watching over some stereo equipment.’ 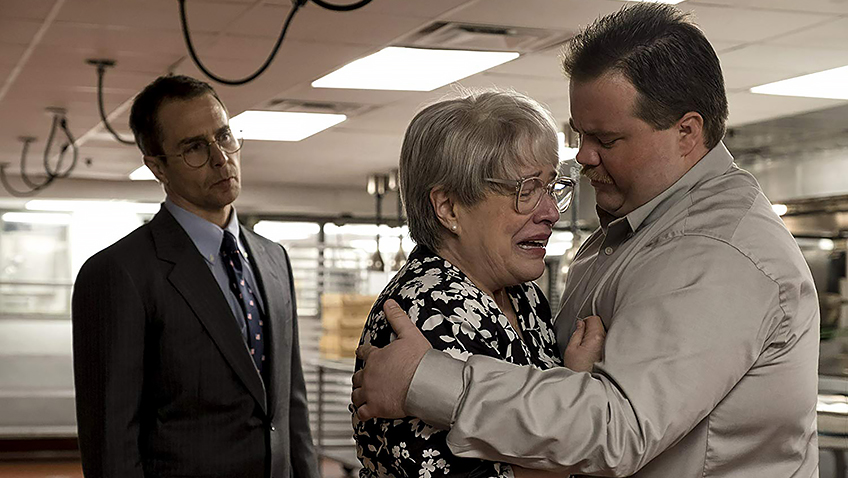 Jewell is the boy who cries wolf among the security guards and police who know him. He is so suspicious and diligent that he alarms his colleagues for what turns out to be a few inebriated teenagers. So, when Jewell notices a large bag under a bench where the kids had been, everyone shrugs it off. Jewell, however, manages to get a professional over to the site who confirms what Jewell feared. Jewell then takes it upon himself to clear the area, no doubt saving thousands of lives before the bomb explodes.

Two characters who will play a major role in Jewell’s fate are also present, and, until the bomb explodes, bored. One is FBI Agent Tom Shaw, and the other is the competitive, sexy reporter Kathy Scruggs (Olivia Wilde) known to do whatever it takes to get her story.

The invisible, tubby little man whose only wish in life is to excel in law enforcement, and who has struggled all his life to make his mother proud, suddenly finds himself an international hero, celebrated by the media. There’s even a lucrative book deal in the works. But for Shaw, there are no other suspects but Jewell, whose status as a lonely, single man seeking attention, and who is obsessed with law enforcement, fits the profile of a bomber to perfection. A quick visit to the Dean of Piedmont College adds grist to the mill.

Then, in a bar where Shaw is known to retreat after work, Scruggs uses her charms and wile to trade sex for a scoop on the investigation. The next day The Atlanta-Journal Constitution breaks the story on the front page. Scruggs laps up the applause from her glowing editor and jealous colleagues.

But, as scriptwriter Billy Ray shows in a script based on Marie Brenner’s 1997 Vanity Fair Article and Kent Alexander and Kevin Salwen’s book, The Suspect

, Richard and Bobi Jewells’ lives are all but destroyed. The three-month media circus and FBI investigation strips them of their possessions, their privacy and their dignity. 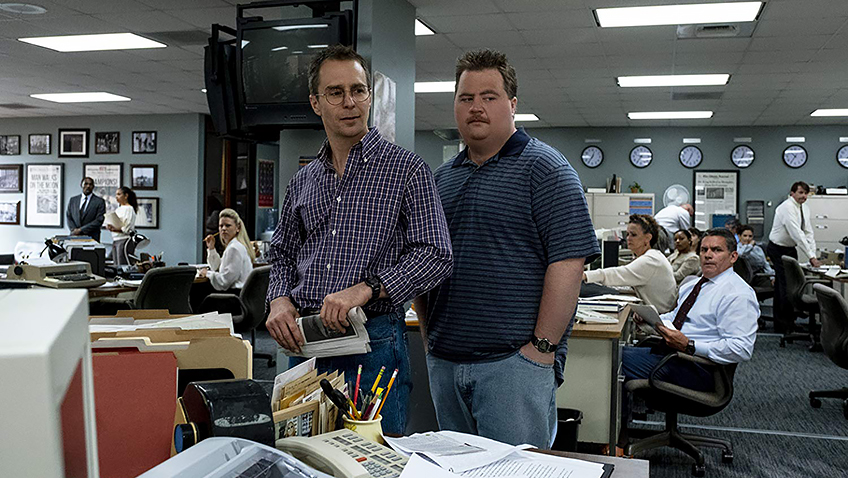 Ten years after Bryant, said goodbye to Jewell, who had gone off to become a police officer, the maverick libertarian who does not like bureaucracy, has started his own law practice with his efficient and devoted (and not just professionally) assistant, Nadya (Nina Arianda). One day, when business is slow, he receives a call from Richard who needs a lawyer. Jewell is the only suspect for planting a bomb in July 1996 at the Centennial Olympic Park during the Summer Games.

The interaction between Bryant, who stands up to the heavy-handed FBI with courage and great skill and Richard Jewell, who cannot help implicating himself by ingratiating himself with the officers searching his mother’s apartment is brilliant and adds humour to this tense and intense film. Equally wonderful is the close relationship between Bobi, who has always had to protect her son (who might have a learning disability) and her son, who believes he is the one responsible for protecting his mother and has failed her.

Less wonderful is the depiction of the media, as represented by Scruggs, a sexist characterisation that is not as accurate as the rest of the film. As Eastwood demonstrated in his film J. Edgar, and in many others, he is sceptical of authority, and he must have enjoyed showing how easy it is for the FBI, coupled with the media, to ruin an innocent, ordinary man’s life. Was he also thinking of the FBI’s role in destroying – and shortening – the life of Jean Seberg (as depicted in the recently released biopic, Seberg). Eastwood, who co-starred with Seberg in Paint Your Wagon, and allegedly had an affair with her, must have followed the media and FBI- generated propaganda and the scandals that drove her to the edge of insanity.