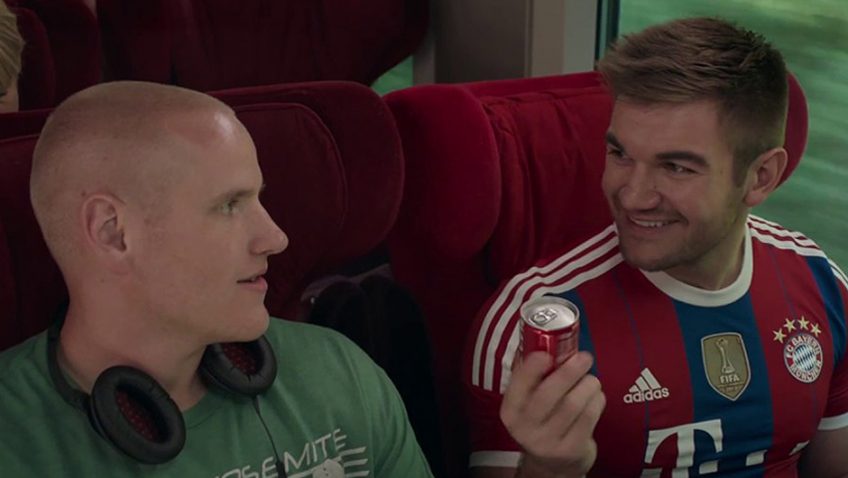 From The Outlaw Josey Wales to Gran Torino as actor and director Clint Eastwood has been attracted to stories about heroes who do what has to be done – even if it means flouting the system. The heroes of High Plains Drifter, Dirty Harry, Tightrope, In the Line of Fire and Flags of our Fathers are associated with law enforcement or the military. Eastwood’s last two films – American Sniper and Sully – are about two very different real-life American heroes pulled from the headlines: one, 35 and a military man and the other, 58, and a commercial pilot. The 15:17 to Paris

is another story of three real-life heroes (two in the military) that is pulled from the headlines, but it is like nothing Eastwood has ever done before.

Given Eastwood’s patriotic pride and interest in dramatising topical news stories (the Hereafter was based on the 2004 Indian Ocean Tsunami), it is not surprising that he would have been attracted to the story of the three young American friends who, on a backpacking holiday on 21 August, 2015, tackle armed Moroccan terrorist Ayoub el-Khazzani, possibly saving the lives of all on board their French train.

But casting was a problem as there were three major lookalike roles to fill for the widely recognisable friends. As late as 2017, in preparation for shooting, Eastwood was questioning Spencer Stone (then 22); Alek Skarlatos (22) and Anthony Sadler (23) about the details of their takedown of the gunman with casting still undecided. Eastwood had used non-professionals in Gran Torino, but during this interview with the young men, he decided to cast unprofessionals as the three lead roles.

In Ang Lee’s recent war drama Billy Lynn’s Long Halftime Walk a slimly film producer tries to convince hero Billy and his unit to sell their story by throwing out the names of celebrities they would attract to glorify them. Having quickly published (with a ghost-writer) a book about their experience, Stone, Skarlatos and Sadler did not need convincing when Eastwood wanted the film rights. But like Billy Lynn and his comrades they were speculating about who would represent them on screen when Eastwood amazed them by offering them the roles.

Eastwood was clearly going for spontaneity and authenticity when he made the additional decision to ask Mark Moogalian – who clearly recovered from his gunshot wound to the neck – and his wife to recreate their traumatic experience on the train in a reunion with their saviours. This might be the first time in cinema history that a non-documentary film has recreated history with the original participants.

But this isn’t a documentary and the film, adapted from the ghost-written memoir by first time feature scriptwriter Dorothy Blyskal, is about more than ordinary people doing extraordinary things. While flash forwards help keep up the tension for the first 75 minutes of the film’s taut 94-minute running time, the uncertain trajectory of the three friends emphasizes the role of destiny leading to this momentous event. When Spencer asks Anthony, ‘Do you ever think that life is pushing us toward something..?’ it sounds melodramatic, but this might be what keeps Spencer motivated through rejection and his dashed dream of being a rescue pilot.

The single mothers of best friends Spencer Stone (William Jennings) and Alek Skarlatos (Bryce Gheisar) react with hostility to a teacher’s suggestion that the boys have ADD and should be medicated. When they meet Anthony Sadler (Paul-Mikel Williams) in detention, the principal warns them to stay away from Sadler, who is trouble. Naturally, the three become fast friends and there is enough trouble for Alek to be sent to Oregon to live with his father. Although Spencer is always polite and affectionate with his often exasperated mother (Judy Greer), you expect all three boys to end up as wastrels or career criminals. It is a story with instructive irony.

Working in a fast-food joint after high school graduation, Spencer, now played by himself, is inspired by a customer to become an Air Force rescue pilot. He gets into shape and studies hard, but fails an eye test and is relegated to Lockland Air Force Base in Houston for alternative training. There is a certain tension in watching Spencer’s formation as you half expect him to implode with in a Columbine rage, but instead, committed to saving people, he tries harder and learns more.

In one classroom session there is a ‘shooter on campus’ alert, and the class is instructed to hide under their desks. Spencer, 6’4” and brawny, grabs a pen and rushes to the door ready to pounce. When the teacher later asks what he thought he would do with the pen, he says, ‘I don’t know, mam, but I just didn’t want my family to find out that I died hiding under my desk.’ Anyone with prior knowledge of the story might be asking themselves, ‘did this really happen?

There are other lines like this pointing to the climactic event. When Spencer gets leave, he persuades Anthony and Alek, who is, at the time, deployed in Afghanistan, to join him backpacking in Europe. We follow them on their ‘Americans abroad’ holiday as Anthony (who we hardly get to know at all after grade school) and Spencer visit Italy before meeting handsome Alek in Berlin. During a tour, a guide corrects Spencer on the facts about Hitler’s death, adding, ‘You Americans can’t take credit for everything every time evil is defeated.’ This incident rings very true.

One night in a bar they are persuaded to put off their trip to Paris to visit Amsterdam. Hung over after an all night rave in an Amsterdam nightclub, they board the 15:17 to Paris and Spencer dozes off. He is awoken by a screaming woman, a man bleeding on the ground and a bearded man with an AK-47 pointed down the carriage.

Does Eastwood’s big gamble pay off? It certainly does when we see the actual footage of la legion d’honneur ceremony, which will bring a tear to the sensitive – or patriotic – eye. Otherwise, it’s hard to tell. The 15:17 to Paris

is always engaging, but it seems that Eastwood is more focused on recreation than on the creation of a drama for those who don’t the story or who the actors are.