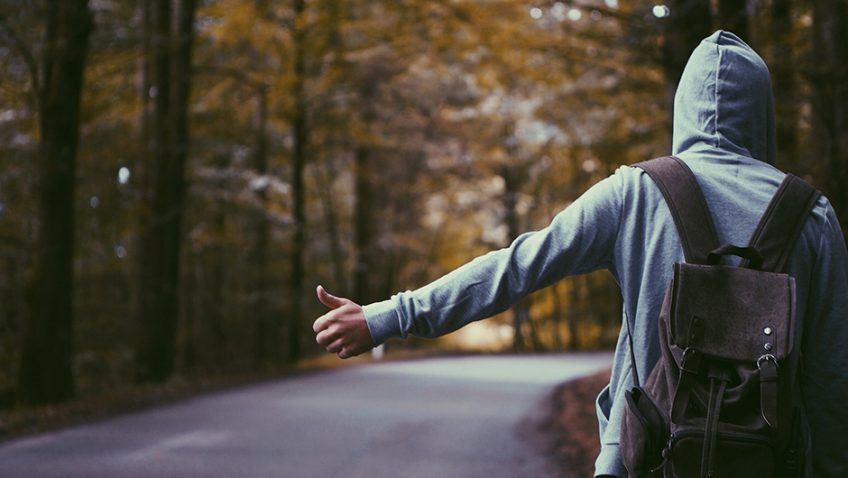 “I can’t take you far, but I can get you away from here”

Occasionally it crops up in conversation with my peers: where have all the hitchhikers gone? Because you hardly see any these days. When young I must have travelled thousands of miles, both in the UK and abroad, just by standing on the side of the road and sticking my thumb out. Back then it seemed like less hassle than virtually any other form of transport. Nothing seriously untoward ever happened to me, and I was struck – time and again – by the kindness of strangers. Such was my passion for this method of getting from A to B, I promised myself that one day, when I owned a car, I would return the favour by stopping for every hitchhiker I came across. I kept my word, but over the years, the supply of people wanting lifts has all but dried up.

Friends who also hitchhiked in their youth have tried explaining to me the reasons for the disappearance of this mode of travel. One view is that young people today are more affluent, so don’t need to try and hitch a free ride. Are they really more affluent? After all, they no longer get their student fees paid, nor do they get maintenance grants. Another theory is that the young are too risk-averse. And yet they’re not too risk-averse to experiment with legal, or even illegal, mind-altering substances. A further argument put forward is that Megabus has rendered hitchhiking irrelevant. But we had an earlier equivalent, Magic Bus (remember that, anyone?), and that didn’t succeed in killing off our enthusiasm for hitchhiking.

Indeed, none of these explanations convinced me, so I decided to investigate. Once I started looking, I found out that sociologists in the US had got there before me. In fact, the decline in hitchhiking has been a subject of debate in the States for some time now. Apparently I was hitchhiking during the golden era of the late ‘60s and early ‘70s; hardly surprising, then, that I was so enamoured. It is claimed that hitchhiking was emblematic of a much larger cultural consciousness that embraced openness, adventure and togetherness. This was replaced in the 1980s by an epidemic of fear, distrust and isolation, fuelled by the popularity of films such as the 1986 horror movie ‘The Hitchhiker’. It seems the practice of hitchhiking just could not survive in that context. Julian Portis, an American college student, argues, furthermore, that hitchhiking was inextricably linked to the hippie lifestyle. When that collapsed, hitchhiking inevitably followed. If it is true that there has been a cultural shift in our thinking, and that this has swept hitchhiking away in its wake, then we are all the poorer.

From time to time hitchhiking shows signs of a revival. A few years ago, a journalist, Stephen Moss, decided to try hitching to the Hay festival. It took him an entire day, and he subsequently wrote about his experience. He was taken by the diverse nature of the people who stopped for him and came to the conclusion that in this day and age only really interesting people are mad enough to pick up hitchhikers. He confessed that, though he may not make a habit of doing it, he had got the bug, and would like to return to hitchhiking in the future, possibly trying out a longer trip across Europe. Of the reasons people gave for stopping, most said that they just wanted to do someone a good turn, but some were so surprised to see someone hitchhiking that they couldn’t help themselves. All this suggests that hitchhiking is now such a minority interest activity that its practitioners have acquired the status of an endangered species.

More recently, artist Will Urmston used hitchhiking as the inspiration for an artwork. He set off from Edinburgh on a hitchhiking road trip, travelling to wherever the driver happened to be going. He then photographed the roadside pick-up point and the lift-giver, and quoted – alongside this – their reasons for pulling over. All the quotes rang true, but two, in particular, struck a chord. The first is the title of this piece, spoken by a middle-aged man. The second, by an elderly woman, went like this. “I saw you with your instrument, your beard and wool hat and it took me back to my past.” It took me back, too, for it echoed something that was that was said to me about 40 years ago: “I don’t usually stop for hitchhikers, but when I saw you on the side of the road, you reminded me of my late wife when she was young.”

These newcomers to hitchhiking are discovering something we old hands knew all along: hitchhiking was never just about getting from A to B. It was a life-affirming adventure, and underpinning the practice was an implicit belief that strangers were essentially good people who would do no us harm. Occasionally someone will come along and get a glimpse of what it was like in its heyday, and broadcast its benefits. Although it hurts me to admit it, I think it unlikely, however, that we will see a full-blown revival. Hitchhiking lives on in our collective memory, and in the fullness of time it will exist as a mere footnote in social history. But if you are lucky enough to see someone thumbing a lift by the side of the road, don’t drive by: the experience could make your day.