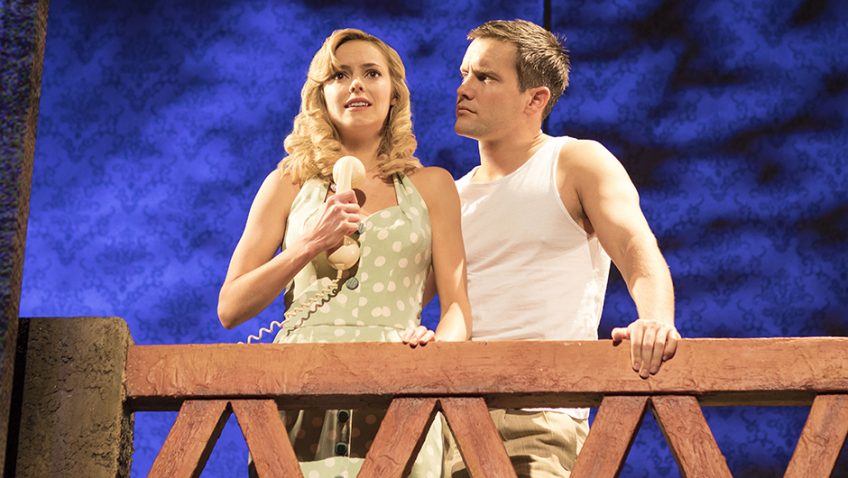 The powerful interplay of the characters makes for compelling entertainment

Given the Hitchcock film treatment in 1951, Strangers on a Train was written by Patricia Highsmith in 1950, her Corgi publishers describing it as “a novel of an evil man…and a weak one… and their terrible bargain.” In psychological dramas like this, the focus is not on the whodunnit murder mystery as it might be in Agatha Christie but, as in Dostoevsky, on the characters themselves, and how the workings of their minds shape their behaviour and, ultimately, their own fate. Craig Warner’s stage version, premiered in London in 2013, might benefit, perhaps, from being more sharply honed in the latter parts of the play, but all the same, it works grippingly well.

Two Americans meet by chance on a train and discover each has a person close to them whom they regard as an encumbrance to their future happiness. A tit-for-tat murder swap is mooted, but is this just an amusing thought, or could the idea become reality? As main protagonist Charles Bruno, Chris Harper (the chilling child-groomer, Nathan, in Coronation Street), gives a superb performance. His thoroughly convincing, many-faceted character is certainly detestable in his manipulative schemings, in his psychotic lack of conscience and morality, and in his monstrous inhumanity; yet the laid-back earnestness, charm and vulnerability of this damaged alcoholic, this repressed homosexual, who’s so utterly dependent on the love of his mother (played confidently strong yet tender by Helen Anderson), elicits a degree of sympathy, too.

In contrast, Jack Ashton’s Guy Haines is a quiet, gentle chap, carefree, optimistic and amused at the outset, then increasingly cowed, numbed, stunned and bewildered by Bruno’s relentless psychological onslaught of torment, and by his own conscience. He’s read Plato’s philosophy that says each of us has both a black horse and a white horse to control through life, a balance of good and evil. But while Charles Bruno (forerunner to Highsmith’s spine-chilling psychopath The Talented Mr Ripley, written four years later) tries to keep firmly astride the black horse in his determination to avoid leading a grey life, Haines, a more ordinary mortal, can’t quite hack it. 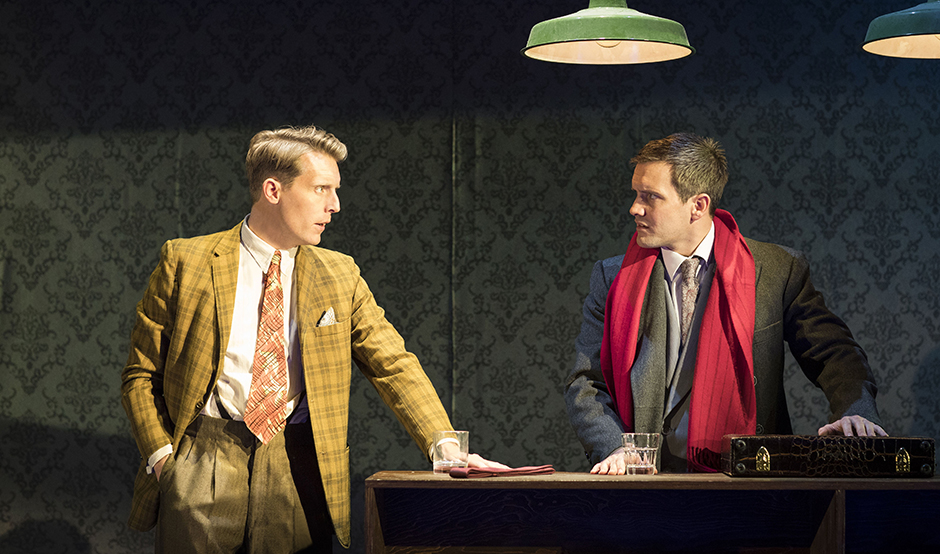 Chris Harper and Jack Ashton in Strangers on a Train

Dialogue and character interplay are first and foremost in propelling the momentum of this play, yet equally exciting, gripping and important to the play’s success is the role played by David Woodhead’s masterpiece creation – the set. His marvellous, aesthetically pleasing, work-of-art panels – which form, at the start, a subtle US flag that develops alarming blood-rich, red stripes – are ingenious. With multiple, neat configurations of the segments, scenes are enacted in different spaces at two levels, all front stage and given a boxed-in, claustrophobic quality that reflects the lives of the trapped characters. The sets within the compartments, like the wonderful costumes, are meticulous, impressively creating a train journey with a flash and clatter of tunnels, and moving us from office to bedrooms, old-fashioned study, modern house or grand mansion with special staircase that moves to other places. It comes as quite a shock to the audience when the stage opens out to full depth and apparent freedom for the final scene as train ‘smoke’ billows into the auditorium.

Sturdy, heartfelt applause attests that the intrigue of the storyline and the powerful interplay of the characters makes for compelling entertainment.