Laughter, so this show says, is the best medicine

Adaptations of the novels of Victor Hugo (1802-1885) have always been able to fill opera houses, theatres and cinemas. Think of the continuing success of Rigoletto, Les Miserables and The Hunchback of Notre Dame.

The Grinning Man is based on L’homme qui rit, which Hugo wrote when he was in Guernsey in exile, following Napoleon III’s coup détat. His Republican views were not acceptable. 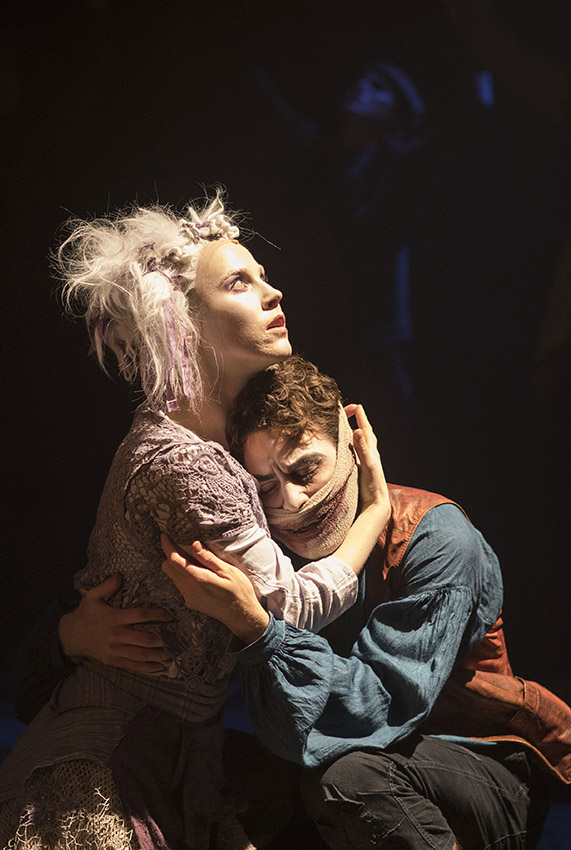 Sanne den Besten and Louis Maskell in The Grinning Man

The novel was published in 1869. The hero is Grinpayne whose face was slashed from ear to ear when he was an orphaned child and left him with a grotesque grimace. He wants to know who committed the crime.

The story has been turned into a musical. The book is by Carl Grose. The lyrics are by Grose, Tom Morris, Tim Phillips and Marc Teitler. The music and orchestration are by Phillips and Teitler.

What is special about this dark musical is not the story, not the music but the actual staging. The director is Tom Morris, artistic director of the Bristol Old Vic, where the production premiered.

The puppetry design and direction are by Finn Caldwell and Toby Olié for Gyre and Gamble, famed for War Horse. This time round they provide puppets for Grinpayne and the blind girl he loves, Dea, and a wolf-hound called Mojo.

The right mood is immediately established on entering the auditorium which has been designed by Jon Bausor to look like one of those 19th century French theatres which staged macabre dramas. The proscenium arch is a gaping mouth.

Grinplayne, a character to inspire disgust and delight, is said to have been the inspiration for The Joker in Batman.

Louis Maskell, his face half-covered with a blooded handkerchief, is cast as Grimplayne. Sanne den Besten is sweet innocent Dea unfazed by incest. The most magical moment is when they take their final exit, climbing over the audience, row by row, with the audience’s helping hand.

Julian Bleach (still remembered for his wonderful performance in Shockheaded Peter) is the evil court jester. Amanda Wilkin is a bawdy Duchess.