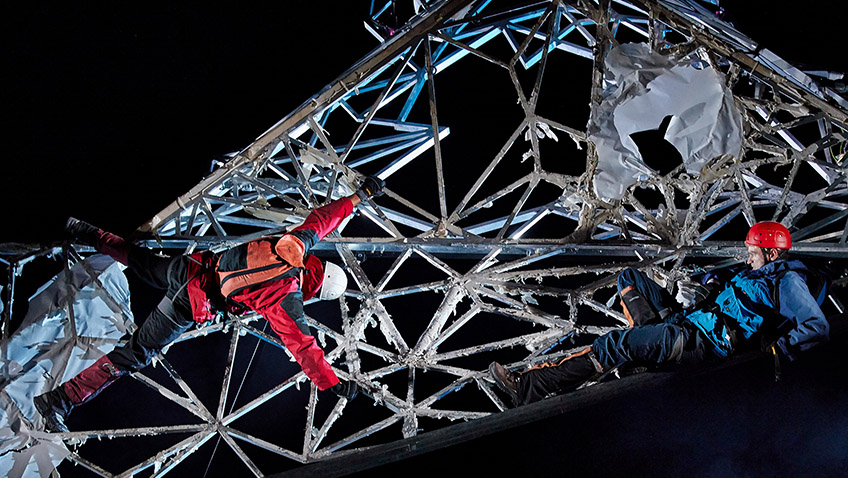 Joe Simpson’s best-selling memoir published in 1988 sold over a million copies. A BAFTA award-winning documentary, a great tribute to human endurance and physical and moral courage, was released in 2003. 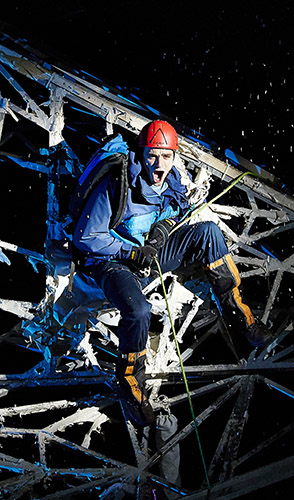 Angus Yellowlees in Touching the Void

Now this famous story of survival against the odds is a stage play. It’s a difficult challenge for any playwright and theatre director. How can they possibly compete with the film?

David Greig, the adapter, decides to go inside Simpson’s mind and record the voice in his head which helped him survive.

Simpson (Josh Williams) and Yates (Angus Yellowlees) reached the summit. Simpson broke his leg during the descent. Yates lowered Simpson with ropes down the steep slope, unintentionally leaving him suspended by the rope in mid-air.

Yates could not see what had happened and could not hear Simpson because of the roar of the wind.

Unable to pull Simpson back, Yates assumed after an hour and a half that Simpson must be dead and cut the rope connecting them.

But Simpson was not dead and crawled back to base camp across glaciers and rocks, despite his excruciating pain, exhaustion, frostbite and dehydration.

The perilous journey and the epic survival are recreated on stage by director Tom Morris and the actors with a couple of tables, lots of chairs and a huge broken climbing frame covered in paper which hangs above the stage to represent the mountain.

Chris Davey, the lighting designer, Jon Nicholls, the composer and sound designer, and It Green, the set designer, play a major role in the success of this amazing venture.

It’s a highly physical production and tension remains at a high level throughout. Josh Williams and Angus Yellowlees, performing eight times a week, must be exhausted.

The voice in Simpson’s head is his sister’s voice (a David Grieg conceit approved by Simpson). It is she who bullies, beats and eggs him on. Fiona Hampton, who plays the fictional sister, also has to climb up the proscenium arch.

If you were trapped inside a glacier with a broken leg and all alone, would you survive?