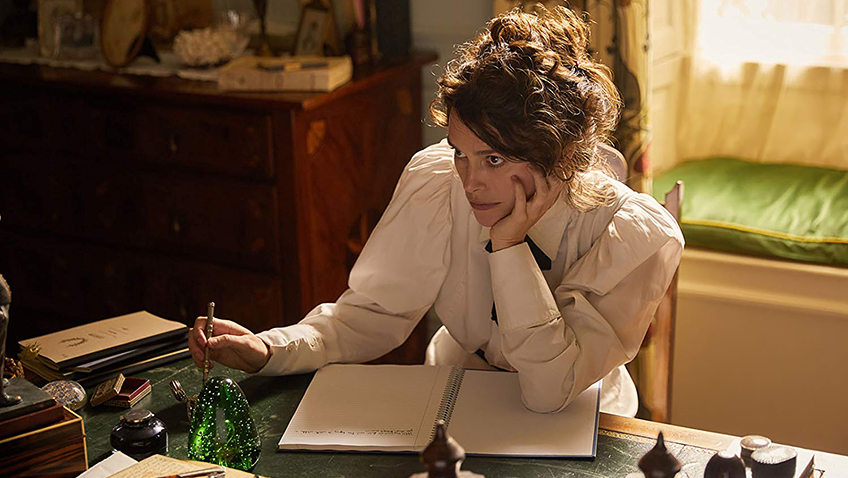 An entertaining witty, though curiously English and conventional portrait of the great French writer

We can be grateful to director Wash Westmoreland (Still Alice) for plunging us into Paris’s titillating Belle Époque, while never letting us forgot the parallels with our own era. While the cancan showed off women’s legs, social mores were relaxing and bi-sexuality was more popular than the Oscar Wilde scandal would suggest, wives were still chattels and women like George Sand only published under men’s names. It is in this decadent yet confining milieu that the talented, multi-tasker Sidonie-Gabrielle Colette (Keira Knightley) asserts her identity and talent while married to older literary impresario Henry Gauthier-Villars, known as Willy (Dominic West).

This is Colette – the writer of Gigi

, and other popular ‘chick-lit’ novels from the first half of the 20th century – in-depth, including more of the innovative writer’s incredibly rich and varied life than other films about her. At its core is a love story turned power struggle, akin, in this one respect, to this year’s The Wife, in which Glenn Close plays the besotted young wife with the writing talent behind the manipulative Nobel Prize-winning husband.

Willy, a charismatic, sophisticated literary publisher, editor and London ‘It’ man has his pulse on Parisian society. He’s an ideas man without the patience or ability to give written form to his ideas. Sidonie-Gabrielle Colette is a country girl of 20 unaware that she has any ideas or or talent for bringing them to life.

Willy is a frequent visitor to Saint-Sauveur-en-Puisaye, but he is far less interested in his old army pal, the war hero turned tax collector Jules Joseph (Robert Pugh) than in seeing his pretty daughter Gabrielle who is no wilting virgin waiting in the wings.

Not long after her marriage and move to Paris, Colette discovers that Willy has a lover – a discovery that he attempts to justify as normal for men in Parisian society. After fleeing to her mother, Sido (Fiona Shaw) who tells her not to get used to marriage, but make marriage get used to her, Colette returns to Willy, under the condition that she will be part of his life and he will always tell her the truth. 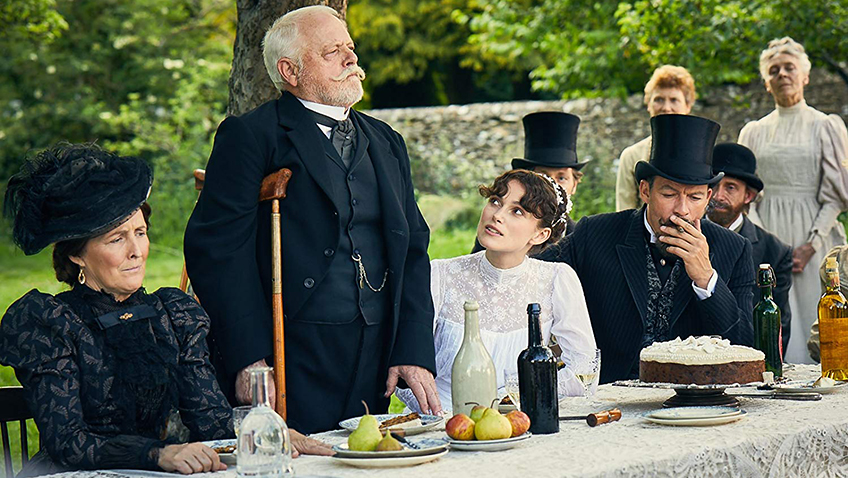 Spendthrift Willy, however, is more preoccupied with cash flow than with the truth. He is frustrated by the inability of his stable of freelance writers to churn out the product fast enough. Aware of his bride’s childhood penchant for story-telling, Willy comes up with the best idea of his life: instead of farming out his story lines to undependable male hacks who insist on prompt payment, his young bride – confined to their apartment and sometimes locked in her room – will write for him for free.

We can only imagine that Colette accepts, albeit reluctantly, this modern slavery because she is finally doing something useful and finding fulfilment. While becoming more confident in her writing talent and finding her place in the social scene, Colette discovers her attraction to other women. During the height of their relationship, husband and wife share not only female lovers, but join in promoting ‘Willy’s’ wildly successful Claudine

books, based on Gabrielle’s school days.

Willy and Colette (a penname she adapts to mark her independence from Willy) are a formidable pair and become the toast of Paris. The books fly off the shelves thanks to the untapped female market, while the audacious marketing appeals to young, more liberated women – and plenty of men – in particular. 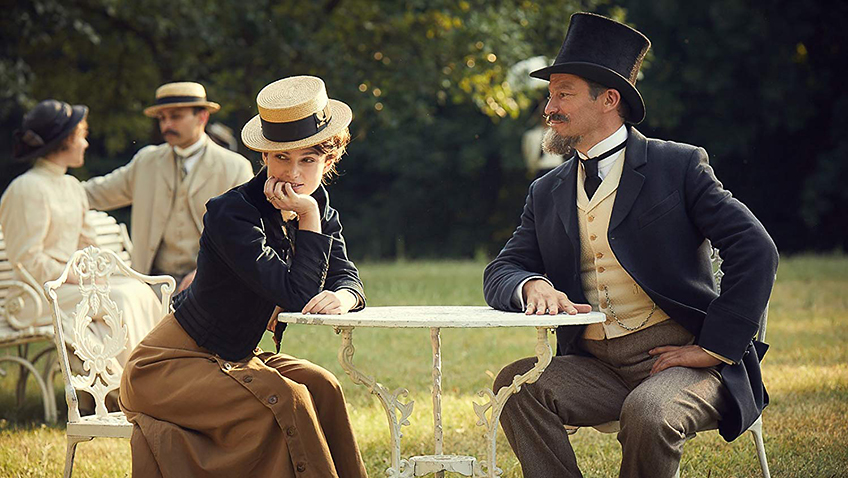 Colette cuts her hair and dresses in imitation of real-life Algerian beauty Polaire (Aiysha Hart does not do justice to the real Polaire) who shows up at auditions of a stage adaptation and confidently tells Willy that she is the real Claudine. Soon every woman is dressed and coiffed like the real Claudine. Girls flock to Willy’s office/home and one young flirt, Meg (Shannon Tarbet) becomes his lover. At the same time, Colette falls for Mathilde de Morny AKA the Marquise de Belbeuf, or ‘Missy’ (Denise Gough). Missy is a wealthy, recently divorced aristocrat who looks and dresses like a man and, in the film at least, is a dead ringer for Glen Close’s biologically female, but outwardly male hotel butler in the 2012 film Albert Nobbs.

The film peters out a bit in the final quarter when Colette, while being tutored by Missy in the art of independence, takes prepares with Wague (Dickie Beau) for his dance, The Egyptian Dream, while summoning the nerve to ask Willy to add her name to the novels. Her decision to leave Paris and tour with Wague is prompted in part by his response and in part by the riotous reaction to The Egyptian Dream’s debut at the Moulin Rouge. Inspired, perhaps, by Howard Carter’s 1907 excavations, Colette rises from an Egyptian tomb and performs an erotic dance that culminates in a kiss from the archaeologist – played for the first and last time by Missy. Allegedly it is due to his heavy investment in this aborted show that Willy went on to do the unthinkable, an act that triggered Colette’s eventual divorce. 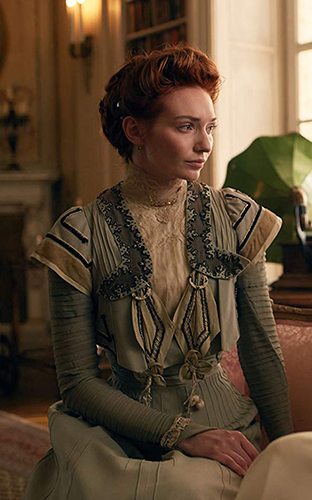 Andrea Flesch’s clever costuming contributes to the story and characterisations. From an early scene in which Colette declines to wear an expensive gown to a salon because it is uncomfortable, to her increasingly male attire, we see that Colette, while stylish, shuns silky, frilly, corseted dresses for clothing that makes a statement.

The script by Westmoreland, writing with his late partner Richard Glatzer and Rebecca Lenkiewicz (who co-wrote the recent Disobedience and the Oscar winning film Ida) is economical and witty, giving Dominic West a chance to shine and show his talent for comedy. If he is not the most French-looking man (in a clever move, all the writing appears on the screen in French, the big problem is Knightley, whose English Rose beauty comes across more than the sensuality, the carnality and the unaffected feline elegance of the Colette.

If you can overlook appearances, it is more difficult to overlooking the acting deficit. Colette’s emotions are conveyed in a superficial and hackneyed manner. One only has to compare the scene in which Colette hurls years of pent up resentment at Willy to the scene in which Glen Close does the same in The Wife to be aware of the obvious, uninventive nature of Knightley’s performance. To portray one of France’s most iconic women, you need an actress with more depth and resourcefulness. Westmoreland, too, disappoints. For such an astonishing and unconventional literary life, the direction is curiously conventional.