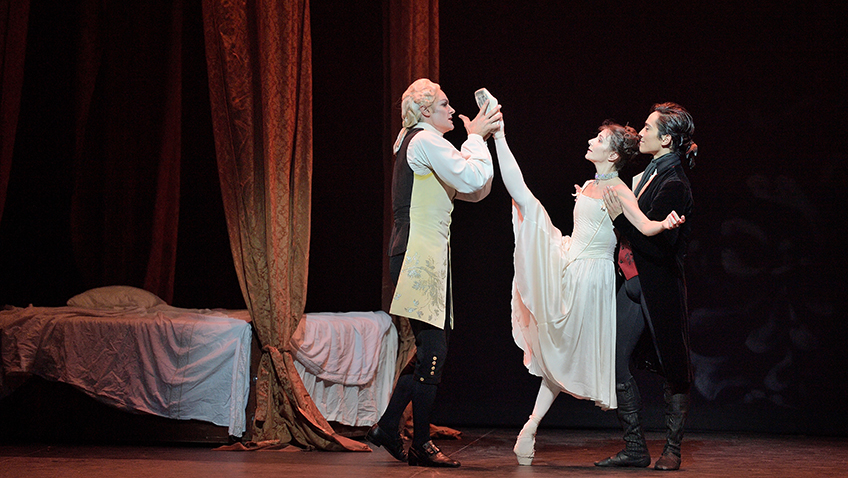 Antoine-Francois Prevost (1607-1763), Jesuit novice, professional soldier, Benedictine monk and Protestant convert, is remembered for Manon Lescaut, which was published in 1730 and was the final part to a seven-volume novel.

The affair of Manon and Des Grieux is one of the great love stories of the 18th century and their story has inspired ballets, operas by Massenet and Puccini, and films. 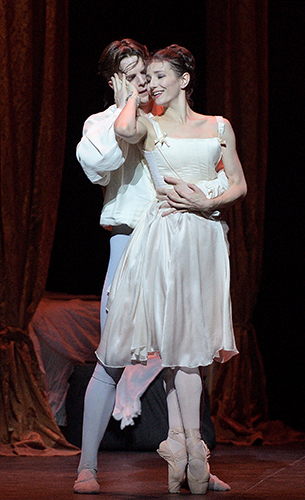 Kenneth MacMillan’s three-act ballet was not well received by most critics at its premiere in 1974, but it went on to become one of the most popular full-length classical ballets in the repertoire.

The story is set in Regency France, a notoriously licentious era. The last time I saw Kenneth MacMillan’s Manon was at the Royal Ballet so it was a surprise when the curtain went up and Nicholas Georgiadias’s glittering, lavish sets were not there. Mia Stensgaard’s sparser stylized sets are designed for touring.

The story begins in Paris. The 16-year-old Manon corrupts the young and very naïve Des Grieux, destined for the priesthood, and transforms him into a cheat, liar and murderer. She is finally arrested as a prostitute and deported to New Orleans where she comes to a lurid end in the swamps of Louisiana.

Manon – a mass of contradictions: complex, variable, kind, pernicious and charming – is one of the great dance roles and makes enormous technical and dramatic demands.

The precision with which Alina Cojocaru and Joseph Caley dance the passionate and dangerous pas de deux and the solos is thrilling to watch. The physical infatuation and eroticism is there in MacMillan’s choreography and they constantly end up on the floor in each other’s arms.

Jeffrey Cirio as Lescaut, Manon’s heartless younger brother, who pimps for her, carries off his drunken solo and a drunken duet with élan.

There is too much unconvincing drunken sexual Behaviour from the corps of prostitutes and their aristocratic customers; it distracts from what is going on centre stage and much of it should be cut.