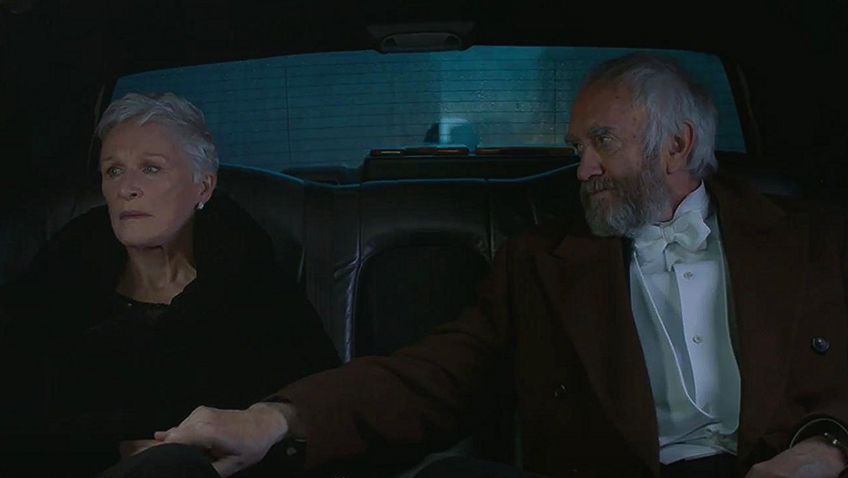 Glenn Close has a knack for turning memorable roles into iconic characters, none of whom you’d want to spend time with: remember Fatal Attraction; Les Liaisons Dangereuses; and Cruella deville in 101 Dalmatians? At 71, is Close turning compliant? In The Wife

, based on the novel by Meg Wolitzer

, Close plays the woman behind the successful man in a challenging, complex role that will surely take her to the Academy Awards this winter. The prospects for the film are less likely.

The man in this case is Joseph Castleman (Jonathan Pryce) a famous novelist approaching 70 who has had many accolades along the way, but has been waiting his entire life for the big prize. In the novel

it is a fictitious prize that is second to the Nobel, but in the film it is none other than the Nobel Prize for Literature. This might be a fittingly ironic nod to the great American novelist Philip Roth who was the most deserving candidate never to have won the prize. More on that later.

The film begins in 1992 in the early hours of the morning in the Castleman’s large Connecticut bedroom where Joe persuades a less enthusiastic Joan (Close) to wait up with him for the phone call that will crown his achievements. They have a big house and enough money: what he craves is the recognition and legitimacy to carry him through his old age. He needs to know that he still matters in the world.

One of the challenges script writer Jane Anderson (How to Make an American Quilt, It Could Happen to You), faces is communicating the stream of conscious thoughts, and character nuances in a novel with a strong first person narration. Fortunately she and director Björn Runge do not rely on off camera narration, but on Close, even though she has relatively few lines. The novel is, however, full of Joan’s imaginative similes and angry or bitter, but always snappy, observations that remind us of what a promising writer she was when she enrolled in a prestigious university’s creative writing class only to elope with her married professor.

We do not get this literary connection from the film, but Close somehow manages to convey almost all of her character’s controlled emotions. And since Close apportions her resentment in small doses until the end of the film, this is no mean feat. 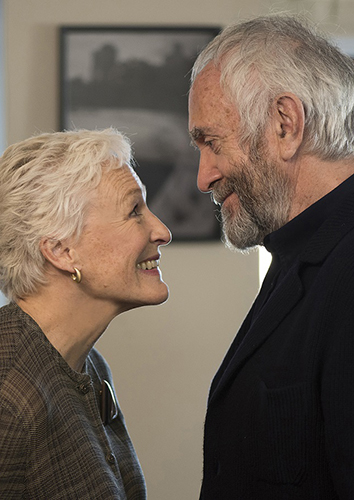 Glenn Close and Jonathan Pryce in The Wife

Close is also assisted by flashbacks that fill in the background with 1950s period costumes and décor showing their romantic early years in a NYC bedsit. We see the period’s misogyny, too, particularly in a scene in which a younger Joe (Harry Lloyd) introduces young Joan (Annie Starke) to a cynical, tipsy female writer (Elizabeth McGovern) who discourages Joan from writing. ‘Don’t do it, she warns, explaining that ‘the public can’t stand bold prose from a woman.

Period flashbacks show Joan working as a publishing assistant who can get her floundering husband’s work read and published. Starke (Close’s daughter in real life) is excellent as young Joan, typing Joe’s manuscripts while taking care of her babies, and conferring with Joe. While you can see why anyone would be attracted to young Joan, Lloyd lacks the charisma, charm, sex appeal or the artistic soul that the impressionable student fell for head over heels. So understanding this devotion is not easy.

In the novel, Joan tells us on the first page that she is waiting for the right moment to leave Joe, although whether she would or not is uncertain. Close conveys this unease perfectly with her face and body. The announcement of the Nobel Prize might have postponed the moment, but as it happens, it ends up accelerating it. After a 40-year marriage built on sexual chemistry; an unspoken pact; children that she sacrificed her dreams to mother, and a life of compromises, the thought of Joe gloating and basking in the media spotlight is more than she can take; particularly if he tells the Stockholm audience: ‘without this woman, I am nothing.’

In Runge’s film, the tension lies in the ambivalence of a wife who experiences more bitterness than joy when her husband receives this great honour. This tension is brought to head in a terrific scene in which Joan reluctantly agrees to have a drink with Nathaniel Bone (Christian Slater) a slimy, persistent journalist and would be biographer of her husband, who has followed them to Stockholm. Bone has meticulously studied Joan’s early stories and has a theory that Joan denies it, but even her denial contains that same ambivalence. 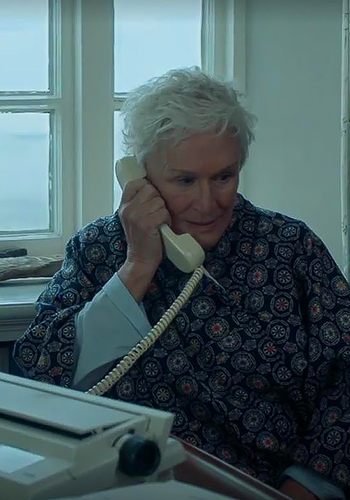 Glenn Close in The Wife

What the film fails to do is enable us to believe in Joan’s sacrifice. You can understand Sylvia Plath’s loyalty to the ruggedly handsome, fiercely intelligent and talented Ted Hughes a lot more, despite his cruelty and infidelity. He could cast a spell. Here, though, the matter of casting works against our ability to swallow the whole relationship. Young Joe might have been good in bed, but neither actor playing him casts that spell physically, or through their talent. And when Joe flirts with a photographer he comes across as a pathetic dirty old grandfather.

There is a key scene in the novel that helps us understand not only Joan’s reluctance to leave Joe, but her determination to help her husband succeed. Joan visits her wealthy Wasp mother to patch things up after running off with Joe, but the two argue. Her mother’s anti-Semitic comments about Joe – that ‘the rapist’ will amount to nothing etc., – only serve to steel Joan’s resolve. She defends him and seems to live to prove her mother wrong.

If the mother’s anti-Semitism is omitted from the film, it hovers over the character of Joe. The similarities between Joe Castleman and Philip Roth are too striking to ignore, starting with the casting of Pryce, who not only played a Roth-type writer in the film Listen Up Philip, but has played Shylock in The Merchant of Venice and a Jewish baker in the 2015 film, Dough.

Both Castleman and Roth are Jewish novelists of contemporary life who live outside Manhattan; both for a time teach creative writing at prestigious universities; both have two wives; both are promiscuous; and both, if you read Claire Bloom’s scathing memoir of her marriage to Roth, are self-centred misogynists. The big difference is that the mega-talented Roth deserved the Nobel Prize he was never given. But here we are given a Philip Roth type character who is not only a bad husband and bad father to psychologically abused David (Max Irons), he is a fraud, unworthy of the Nobel prize he has indeed finally been given. Joan’s mother is proven right.