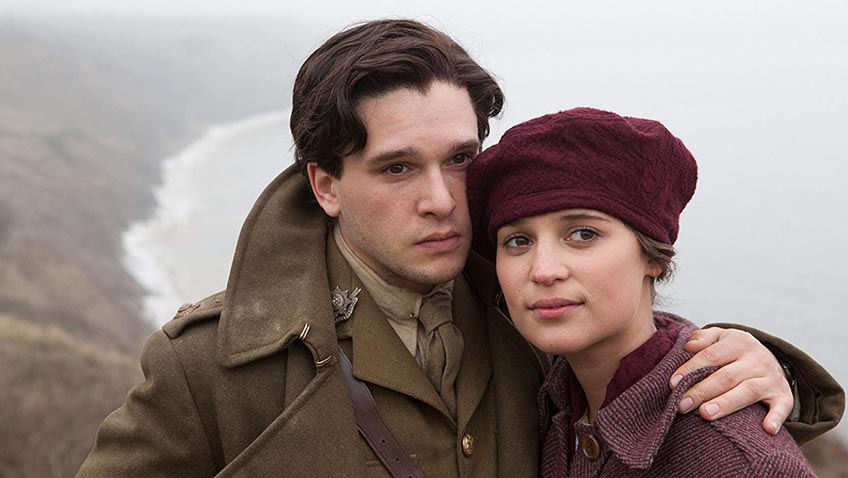 Due to its length (some 600 pages), large cast of characters, years spanned and locations required, Vera Brittain’s WWI saga, Testament of Youth

cries out to be a mini-series. In fact, a 1979 mini-series ensured that Brittain’s novelistic memoir was never out of print  in the UK.

With top-notch production values, Juliette Towhidi’s efficient, if not exactly exciting script, and a compelling central performance from Alicia Vikander (so memorable as Queen Caroline Matilda in A Royal Affair), Director James Kent manages to capture the essence of the memoir without the need for a dragged out mini-series.

The story – which now has elements of cliché and déjà vu that Kent cannot avoid – was a best-seller when it appeared in 1933, and it is still easy to see why. To their credit, Kent and Towhidi manage to convey the unique feminist perspective and passion that made the novel special in the midst of a plethora of memoirs, novels and poetry by disillusioned veterans that were published in the late 1920s.

Kent dwells on Brittain’s pastoral idyllic, pre-war life in a loving, prosperous family only long enough to set up the marked contrast with what follows after war is declared. We are left in no doubt about the true cost of war and the enormous changes WWI brought about.  If this is a film about a changing nation planting the seeds of the feminist movement, it is also the specific story of the growth of a Victorian girl’s independence, consciousness and pacifism.

At the age of 21, Vera Brittain, with the help of her adored brother Edward (Taron Egerton) finally persuades her mill-owner father (a touching performance from Dominic West) to let her sit the entrance examination for Oxford.  She, and her poetry-writing fiancé, Roland Leighton (Kit Harington), are looking forward to studying together (and more) at Oxford when the war breaks out.

Leighton, Brittain’s beloved brother, Edward and their good friend Victor Richardson (Colin Morgan) are swept up by the patriotic recruitment drives. Brittain heads off to Oxford, already hating the war before it takes its full toll on the men in her life. Eventually, her conscience forces her to trade her books and dreams for the uniform of a Voluntary Aid Detachment.  Brittain insists on serving in France near the trenches. 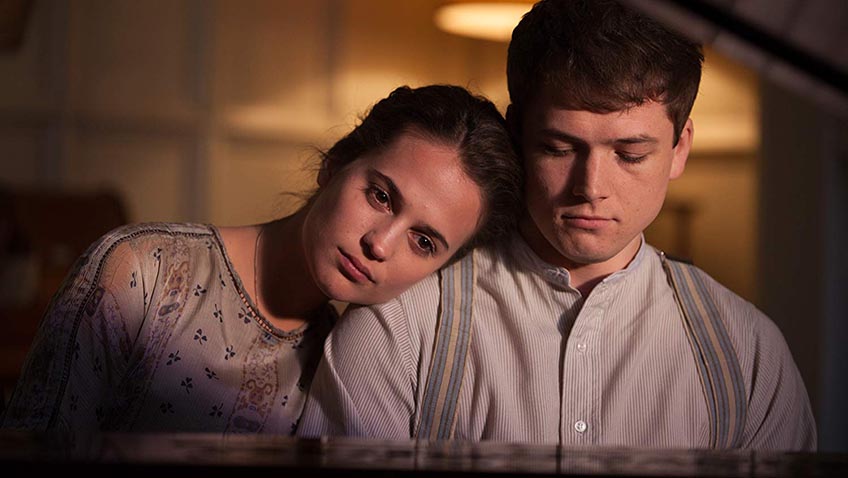 Alicia Vikander and Taron Egerton in Testament of Youth

We learned from the Oxford entry exam scenes that while Brittain’s Latin was weak, she excelled in German.  In one of several poignant episodes that elevate the film above an ordinary costume drama, we see Brittain comfort a dying Germany enemy soldier in a British field hospital. Her German is convincing enough for the hallucinating soldier to mistake her for a loved one back home. With the exception of a few false notes early on, Swedish actress Vikander’s English accent is equally good.

Cinematographer Rob Hardy’s palette changes from the greens of rural England, the pastels of Leighton’s wild flowers and the period’s white frocks, to the browns and greys of the war and its drab aftermath.  The perpetual summer of pre-war England is transformed into the metaphorical winter of war, with its rain, dark skies, clothes, mud and blood. 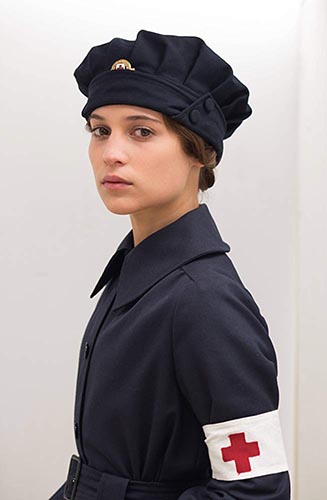 Alicia Vikander in Testament of Youth

The prospect of hearing a young man’s love poems to his girlfriend narrated over picturesque landscapes is enough to make even a sentimental viewer cringe, but here again our worst expectations are confounded as Leighton had real talent.  His rhymes and rhythm are striking, and the potential illustrated in these few sequences again serve to highlight all that was lost in the slaughter.

In early 1916 Brittain wrote to Edward: ‘If the war spares me, it will be my one aim to immortalise in a book the story of us four’, (referring to Edward, Roland, Victor and herself).  It took her 17 years to make good her promise, but the memoir was highly praised and became a best seller. While we get just the right dose of the pre-war and war periods, what is short-changed is Brittain’s post-war transformation to a feminist, writer and pacifist. In all fairness, Testament of Youth

That said, despite a very clear scene in which Brittain gives an impassioned anti-war speech, we do not get a sense of Brittain’s long struggle to write and publish the memoir when the people in her novel, or their parents and relatives, were still living. Her marriage in 1925 also contributed to the difficulties. Ironically for a would-be independent woman and feminist, the birth of two children and a socially conventional husband took their toll and delayed the writing.

It is said that her husband, George Catlin, was embarrassed to be in the book because of his wife’s close friendship with fellow Oxford graduate and writer Winifred Holtby, described at length in the memoir. If you have read Testament of Youth

, you may recall that George is all but written out of the memoir, being referred to as ‘G’ a few times at the very end.