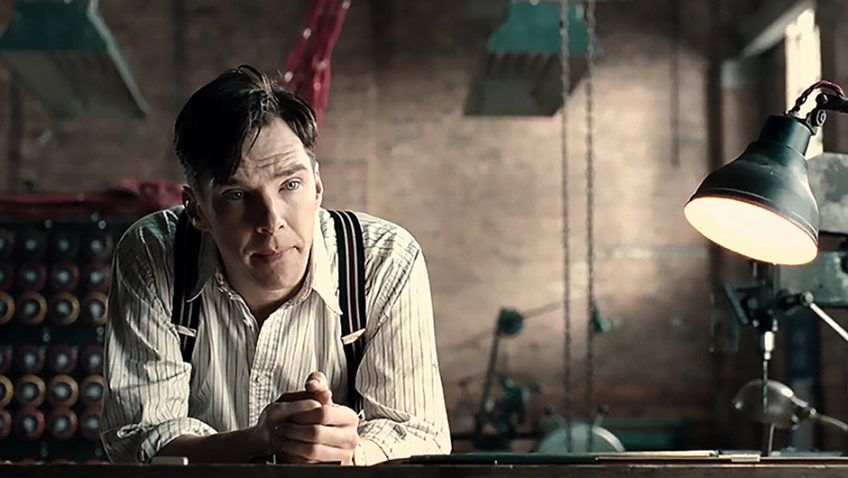 Benedict Cumberbatch excels in this geeky role alongside Keira Knightley

Four years before his death (a suspected suicide) from cyanide poisoning in 1954, Alan Turing published a paper which asked the question: ‘Can machines think?’  The Turing test is a measure of whether a machine’s behaviour can be distinguished from that of a man.

Turing argued that a well-designed machine could do well in this ‘Imitation Game.’ As Norwegian film director Morten Tyldum shows in The Imitation Game

, Turing, the mathematics genius who cracked the Nazi Enigma Code in WWII, was an expert at the Imitation Game by necessity.

The film’s message is effectively highlighted by beginning the story towards the end, in 1951, when Turing is arrested for his homosexuality, a criminal offence in England. A nervous man assures the police that there is really nothing missing.

They have been called to the scene of a robbery, but since the robbery was committed by the man’s young, male lover, he lives to regret the ruckus.  Detective Robert Nock (Roy Kinnear) believes that the robbery victim, identified as Professor Alan Turing, is hiding something and pulls him in for questioning.

In an interview with Turing (a convenient, though fictitious event), Nock hears Turing’s incredible confession and realises that what Turing was hiding was not what he suspected. Since all of Turing’s accomplishments at Bletchley Park were top secret and his war time record a blank, he was initially suspected of being another Cambridge spy.  When the truth was out Turing was forced to choose between prison and hormonal castration.

There is something a bit autistic about Turing with his slight speech impediment, unapologetic arrogance and directness. The clever verbal sparring and the humorous clash of egos during the interview delight the viewer.  This is one of several such scenes that give the talented British actor Benedict Cumberbatch (TV’s Sherlock, The Fifth Estate, 12 Years a Slave) the kind of geeky role at which he excels.

Far from being a sycophant, Turing confesses that he does not even speak a word of German: but, he shrewdly adds, he does know about the difficult Enigma code.  Surprised, Denniston adds that the code is not just difficult, but impossible. ‘Good,’ Turing responds. ‘Let me try and we will know for sure.’

While the film focuses on Turing’s struggle to build one of the world’s first computers to crack the code, and the group of mathematicians, linguists, chess and crossword champions, scholars and intelligence personal who supported him, it also flashes back to his crush on Sherborne School mate Chris Morcom, who encouraged him to pursue cryptology (in fact, it was Victor Beuttell who was into cryptology). Crucially, it also flashes forward to Turing’s post-war arrest, chemical castration and accidental or intentional poisoning.

A key feature of the film is the close relationship between Turing and Joan Clarke (Keira Knightley).  Although Clarke was not recruited from a crossword competition as shown in the film, she was in reality a talented cryptologist and did accept Turing’s quickly retracted marriage proposal.

Keira Knightley in The Imitation Game

While the strength of the film is its emphasis on the shameful way in which Britain’s prejudice against those who are different destroyed one of the greatest minds of the 20th century, its handling of the subject remains dry and reverential, as though the producers were embarrassed to address Turing’s sex life.

His marathon running (he was nearly selected for the British Olympic team) is all but ignored and, while the best scenes involve Turing and his computer (see the computer at Bletchley Park), we learn little about his work during the war at Bletchley or elsewhere in the UK, the USA and France.

The 2001 Michael Apted/Tom Stoppard film, Enigma was based on Robert Harris’ terrific, atmospheric novel of the same name which fictionalised the Turing story, turning it into a thriller.

, is very different. Still, you can’t help wish it were more of a thriller and less of a formulaic costume drama.  That the film is a bit leaden is all the more surprising to anyone who saw Tyldum’s ripping yarn, Head Hunters.

Benedict Cumberbatch in The Imitation Game

If you are adapting a film from a biography and real life as opposed to a novel, it is absurd to invent key historic scenes for dramatic affect or ‘eureka moments’. The audience may derive vicarious satisfaction from the result of Turing’s letter to Churchill complaining about the oppressive and unimaginative team leader Hugh Alexander (Matthew Goode) since he gets himself appointed head of the unit – but this did not happen.

Alexander was not head of the unit at the time, the two men did not clash over methods and when Turing did write to Churchill in late 1941, it was to plead for more staff, with the letter signed by the four leading code breakers.

While purporting to be based on the biography of Turing, there is no evidence in the biography or elsewhere that Mark Strong’s MI6 character met with Turing; Cairncross did not work in Hut 8, and Turing was not accused of being a spy. There is certainly enough in Turing’s incredible life to make an exciting, vivid, poignant tribute – not to mention hard-hitting social commentary – without resorting to facile fiction.