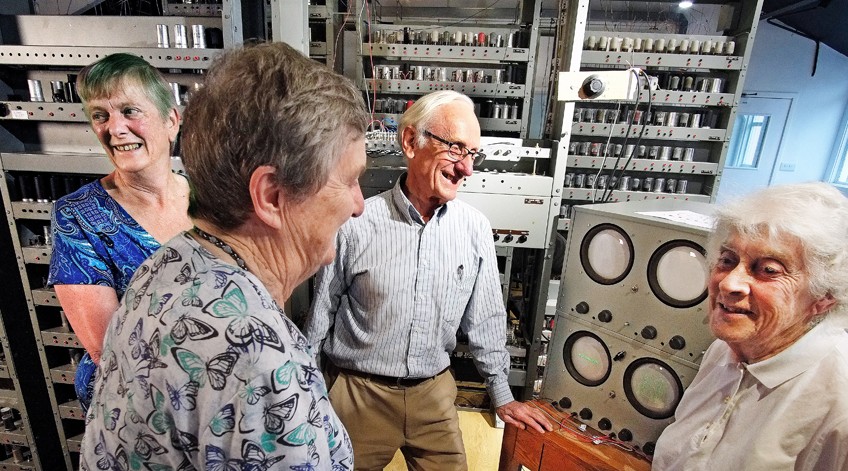 Britain’s first ever university computer is getting a reboot, 70 years on, with the help of some its original technicians.

The EDSAC (Electronic Delay Storage Automatic Calculator) was the first computer to ever enter service at a university, running its first programme at the Cambridge University Mathematical Laboratory in May 1949.

It was one of the first practical general purpose computers, capable of performing 650 instructions per second, effectively computing more than 1,500 times faster than the mechanical calculators it replaced.

Last week the team working on the reconstruction project were visited by a team of EDSAC veterans – some of the engineers who worked with it in Cambridge in the 1950s.

Joyce Wheeler, then an astronomy postgraduate student, and Margaret Marrs, an EDSAC operator, were joined by Liz Howe, an operator of EDSAC 2, and shared their memories of life as Cambridge’s first computer scientists.

Speaking about the project Joyce, 85, said: “It is amazing, it brings back so many memories.”

Some of her work with the device including working out differential equations to learn the internal temperatures of stars.

She said the problems were “quite difficult to solve” and only made possible by the EDSAC. Andrew Herbert, leader of the EDSAC project, said: “In reconstructing EDSAC, photographs and some documentation have been available, but it has been essential for the team to get into the mindset of the original creators to be able to fill in many unrecorded details.

“Thankfully the EDSAC veterans have confirmed that the guesses that we’ve had to make have been correct.”

Designed in 1947 by computer pioneer Sir Maurice Wilkes, the original EDSAC operated for almost 10 years at the university, contributing to three Nobel Prizes in the process.

A Cambridge physics graduate, Wilkes worked on radar systems during the Second World War, before leading what would become the Cambridge Computer Laboratory.

Now, to mark its 70th anniversary, it is being reconstructed at the National Museum of Computing at Bletchley Park in Milton Keynes, Bucks.

The reconstruction project is costing around £250,000 but is being carried out by volunteers who are working for free.

Speaking about the memories of the original technicians Mr Herbert said: “The most fascinating aspect of their recollections is the social history of day-to-day working with an early computer.

“Working boundaries were obviously much more flexible then and we learned how the engineers worked very closely with the operators and users.

“But it was certainly tough for the first programmers – they really were thrown in at the deep end and had to teach themselves the new skill of programming.”

Joyce Wheeler said: “There were notes describing EDSAC and I remember going to the lab to read it all through and to do the exercises at the back.

“They were very important in learning how to programme.”

The on-going reconstruction which is set to be completed in 2017 can be seen by visitors to the museum.

For more about the EDSAC project visit www.tnmoc.org/special-projects/edsac