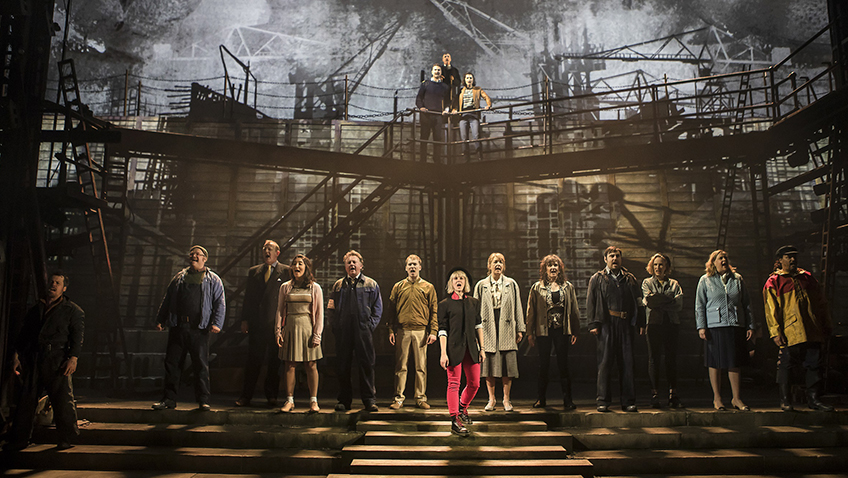 All manner of stage shows have been inspired by the 1980’s Thatcher era. Many, like Lee Hall’s Billy Elliot and Boff Whalley’s We’re Not Going Back, portray the vicious clashes with miners and the utterly devastating consequences of pit closures and deprivation in the North on individuals, relationships and community life. While The Full Monty features steel workers, the stars of The Last Ship are shipbuilders, likewise suffering the loss of their sense of pride, identity and self-worth as livelihoods and close-knit communities that had thrived for generations are smashed into oblivion almost overnight. 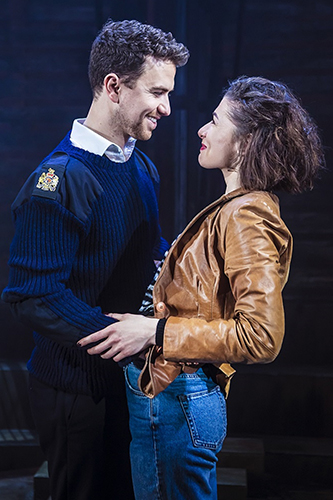 Richard Fleeshman and Frances McNamee in The Last Ship

Gordon was one lad who grew up watching giant ships being constructed literally at the end of his street in Wallsend on Tyneside, but he left as soon as he could to become a rich, famous musician nicknamed Sting. Now older and wiser, he honours and praises the hard-working people he left behind as worthy, unstoppable, beautiful people, struggling to carve their way in an unfair world. His first Last Ship, staged in the US in 2014, was not a success, but this production, with new book by Lorne Campbell, earns rapturous applause here, especially in northern regions where the characters and situations have greatest resonance.

As the political situation unfolds and evolves onstage, so do the personal lives and relationships of the characters. At 17, Gideon Fletcher ran off to sea to escape a life of shipbuilding, returning out of the blue 17 years later to the girl he jilted and, to his surprise, a teenage daughter. As Gideon, Richard Fleeshman has strong, assured stage presence, charm and conviction, and his great singing, with husky Sting-toned edge, is just the job. Strong, too, is Frances McNamee as once jilted Meg, now a spirited young woman, standing firmly on her own two feet. In fact, even with five cast changes today, it’s a strong cast all round. With Charlie Hardwick ill, fine singer Penelope Woodman stepped in as an admirable, formidable, sympathetic Peggy White, wife of dignified foreman Jackie White (Joe McGann), their long-standing, loving relationship providing touching drama as well as humour. Susan Fay took up handbag, hairdo and blue suit to step ably into the role of politician Baroness T (- Tynedale, not Thatcher, though you may not spot the difference), while Michael Blair was our strong-voiced Davey, and Parusa Shahmir was today’s convincing Ellen, headstrong, spirited daughter of Meg and Gideon, determined to leave home and try her luck as a musician in a band. Plenty of humour arises from Charlie (Adrian Sanderson) a working class lover of the classics who’s constantly ribbed for being so knowledgeable and well-read, while Joe Caffrey creates a stalwart Billy with canny Geordie accent.

Voices harmonise in rousing, foot-stamping, folk club choruses while fine solos and duets from the likes of Fleeshman and McNamee, bring more tender moments, a small part of the music originating from Sting’s own Soul Cages concept album of the early nineties. An unobtrusive offstage band of five accompanies on melodeon, percussion, guitar, violin and bass, very occasionally supplemented by onstage playing from penny whistle, fiddle and guitar. 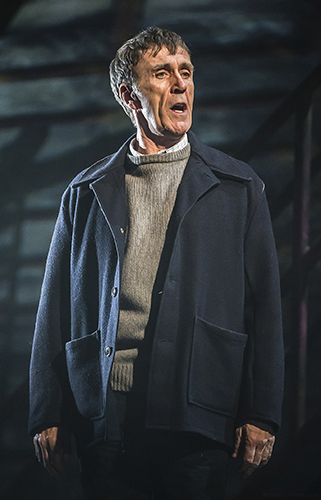 Joe McGann in The Last Ship

A handsome set and superb lighting contribute hugely to the success of the show, the artistic interplay of light, shadow and projected effects across the big expanse of wood panels and metal walkways shaping mood and atmosphere as well as conveying time and place, from shipyard and bar to deserted living room or broad church. A beautiful mini-show in its own right takes place on high, on a skyline where clouds scud, then grow denser at times of stress or pink when romance is in the air (cliche? yes), where stars shine, a lighthouse flashes gorgeous beams, waves crash, skeletal cranes and rooflines loom, or silhouetted figures dance – so beware back seats set beneath low overhangs of the circle above or you’ll miss all that!

The social history in song may be a bit long-winded and unsubtle at times, the worthy earnestness of sentiment, nostalgia and gutsy defiance a tad overdone, while the triumphant sailing off into the sunset, of the fictional, good ship Utopia may prove a tear-jerker for some but a cliche too far, perhaps, for others. But this beautifully staged, well acted show is vibrant and thoroughly engaging and, though full of ongoing sadness and defeat, is uplifting and triumphant.

The current tour will finish at the end of this week at the Lowry, Salford